HDMI 2.1 is arguably one of the most significant upgrades to the HDMI standard. Originally announced in November 2017, HDMI 2.1 significantly increases the maximum bandwidth capability of HDMI up to 48Gbps, and even more when compression is used. This allows HDMI to transmit resolutions as high as 10k @ 120Hz. It also adds many new features, including Dynamic HDR, support for a variable refresh rate, quick media switching, auto low latency mode, and eARC, just to name a few.

At the moment, there are only a few HDMI 2.1 TVs on the market, and some 2018 TVs support some HDMI 2.1 features, but there are no HDMI 2.1 sources available that can take advantage of the new features. It will be some time before HDMI 2.1 is widely available on displays, and probably even longer for source devices to support it, but some of the new features can be back-ported to existing HDMI 2.0 devices. While some of the features can improve the viewing experience with regular content, the higher bandwidth and new features are especially useful for future generations of game consoles, or for higher resolution displays with faster refresh rates.

HDMI 2.1 is a significant upgrade. It adds many new features and increases the maximum bandwidth an HDMI cable can support. Below is a list of the main, consumer-oriented additions and changes to HDMI 2.1. 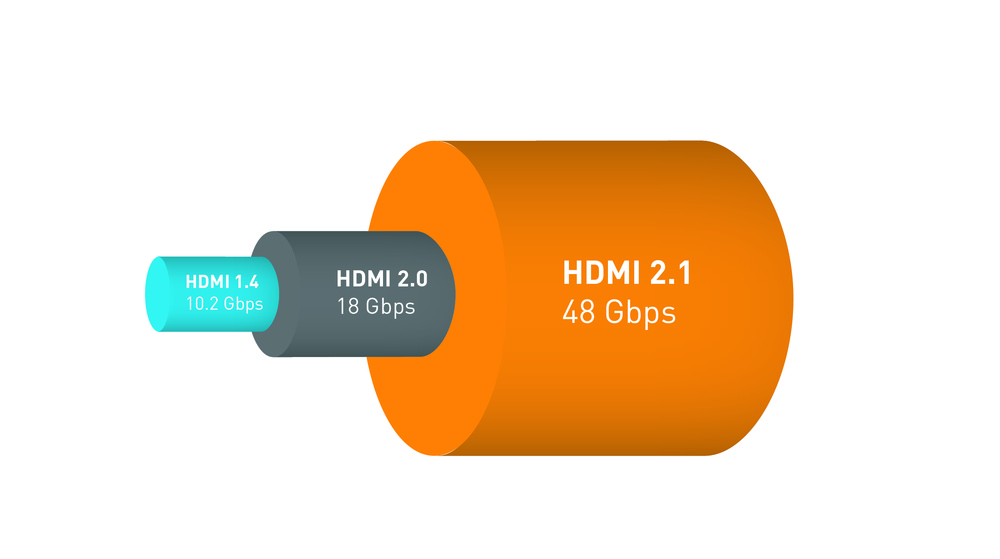 For example, if a manufacturer only wishes to support 4k @ 120Hz, with 4:2:0 chroma subsampling, then they only need to support 32.08Gbps, and can still be considered an HDMI 2.1 device. This gives manufacturers significantly more flexibility and allows them to save costs, as they don't need to implement support for extra bandwidth that the device can't use anyway. In fact, a manufacturer could choose to release a display that supports all of the new HDMI 2.1 features, without any bandwidth increase, and it would still be considered HDMI 2.1. This could also make things a bit more complicated for consumers, as it will be more important to verify the capabilities of every new device, to make sure it can support enough bandwidth for the planned usage.

The increased bandwidth supported by HDMI 2.1 will allow TV manufacturers to release new devices with resolutions as high as 10k (10420x4320). It is not likely that displays with these ultra-high resolutions will be available on the market for many years.

The following table covers most of the new resolutions and refresh rates permitted by HDMI 2.1. 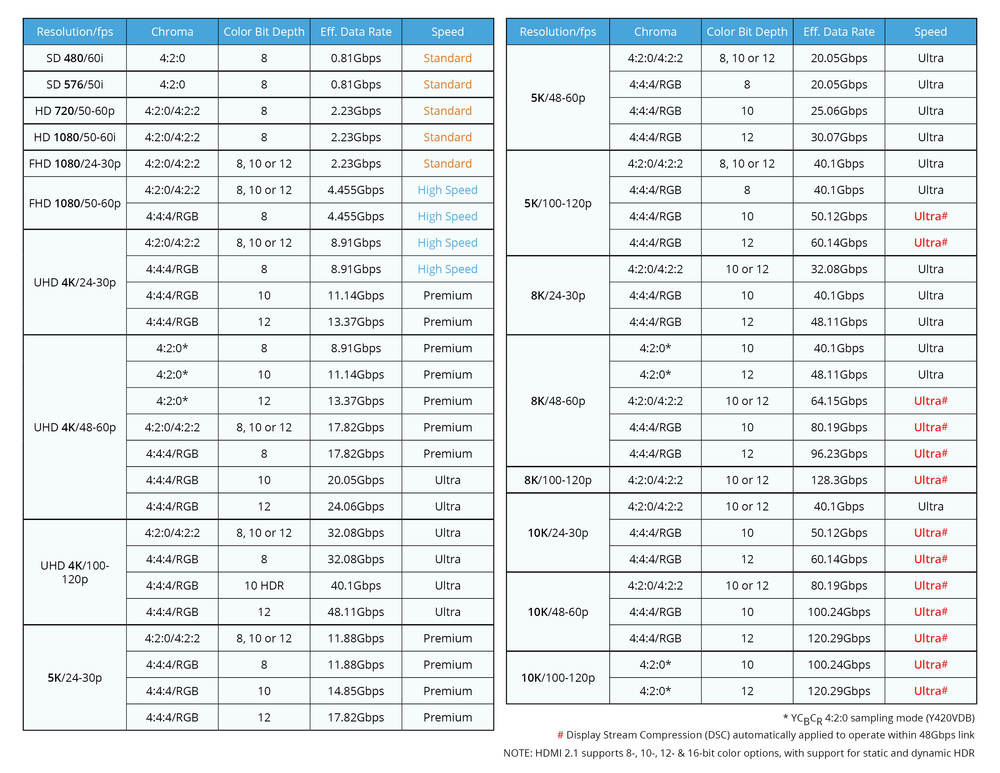 Similar to other dynamic HDR technologies, like Dolby Vision and Samsung's HDR 10+, HDMI Dynamic HDR allows content to set the dynamic range on a per-scene basis, or even frame-by-frame. We don't yet know how well this technology performs, or how similar it is to the other dynamic HDR formats. Like any new format, until there is content designed for it, we won't know for sure.

Like AMD's FreeSync or NVIDIA's G-SYNC, the HDMI group has created their own version of the VESA Adaptive Sync protocol. We don't know much about their implementation yet, but it is expected to not be compatible with AMD's FreeSync. That being said, there is nothing stopping manufacturers from implementing both, as Samsung has already implemented FreeSync on some 2018 TVs and is expected to support both FreeSync and HDMI Forum VRR on some 2019 models.

Another great feature created with gamers in mind, Auto Low Latency Mode (ALLM), also known as Auto Game Mode, allows supported TVs to automatically enable the TV's low latency 'Game' mode when it detects a game being played. This saves you the hassle of having to manually enable it each time you start playing. It even knows the difference between playing a game, watching a game on YouTube, or watching a movie, and automatically switches as needed. Again, Samsung was ahead of the pack with this feature, as some 2018 models already support it.

In the past, whenever your device changed the parameters of the signal it was sending, like TV, the screen would go black for a few seconds while the TV adjusted to the new signal. This would be especially noticeable on game consoles, where the output refresh rate, and even the resolution, would sometimes change depending on the content. Quick media switching fixes this issue. When a compatible source is connected to a compatible display, the display will no longer display a black screen when switching formats, instead instantly switching between modes with no distracting black screen.

Quick Frame Transport changes the way images are transferred from a source device to a display. Frames are transferred at a much higher rate, in order to reduce latency. Total input lag is a measure of many factors, including the time it takes the display to process the image and display it on screen. QFT won't completely eliminate input lag, but it will reduce the lag caused by the transfer time between the source and the display.

The Audio Return Channel, or ARC, has been a part of the HDMI standard since version 1.4. ARC allows you to connect all of your source devices (Blu-ray, game console, etc...) directly to your TV, and have a single HDMI cable connecting the TV to your receiver. This enables bi-directional communication between your receiver and TV; audio is sent from the TV to the receiver, or the receiver sends video back to the TV, with only one cable. This also allows you to connect devices to the TV or receiver, and all of them will send the audio to the receiver. This is great for a wall-mounted TV or ceiling-mounted projector.

The current implementation of ARC has some limitations, though; the limited bandwidth (~1 Mbps) limits the quality of the audio that can be sent over the return channel, making it impossible to send high quality, uncompressed audio to your receiver.

eARC solves these issues, and truly future-proofs your display and receiver. It vastly increases the amount of bandwidth that the ARC channel can use, up to an impressive 37 Mbps. This extra bandwidth makes it possible to send uncompressed 5.1 and 7.1 audio, such as Dolby TrueHD and DTS-HD MA, which are often the carrier signals for Dolby Atmos and DTS:X.

With the new, higher bandwidth requirements of HDMI 2.1, it was clear that new methods of compression were required. The most common method of compressing video streams was a technology called Display Stream Compression. DSC was initially developed with computers in mind and couldn't encode most TV signals efficiently, as it could only work with RGB color. The VESA group that is responsible for maintaining DSC released an updated version of DSC, known as DSC 1.2, which increased the maximum color depth to 16 bit and enabled native YCbCr 4:2:0 and YCbCr 4:2:2 encoding without the need to convert to RGB first.

This technology, which is supported by HDMI 2.1 but not necessarily by all devices that will support HDMI 2.1, drastically increases the maximum bandwidth that HDMI 2.1 cables can transmit, without compromising image quality. DSC is only required for very high resolution, high refresh rate devices, and it may be many years before it is needed.

Q: My device supports feature X from HDMI 2.1, does that mean it supports HDMI 2.1?

A: Not necessarily. One of the interesting changes is that for the first time, manufacturers can choose to implement some features of HDMI 2.1 in HDMI 2.0, including VRR and ALLM, as these features require very little additional bandwidth. Devices that support these features, including the Samsung NU8000, the NU8500, the Q6FN, the Q7FN, the Q8FN, the Q9FN, and the Xbox One S/X are not HDMI 2.1 devices; they merely implement some features from 2.1.

Another example is eARC, which can be added to almost any HDMI 2.0 device with a firmware update. There are only a handful of TVs that have received eARC updates, including the Sony A9F and Z9F, which were released with eARC support. These devices are not HDMI 2.1 devices; they merely support some of the features found on HDMI 2.1.

Q: Will I need to upgrade my cables?

A: It depends on what you want to do. HDMI 2.1 uses the same physical layout and the same connector as existing HDMI Premium High Speed cables. With the exception of eARC, which requires a Premium High Speed + Ethernet cable, most of the other new features can be implemented on existing devices, with existing cables. If you want to take advantage of any of the new resolutions or higher refresh rates, however, you'll eventually need to upgrade your cables.

Q: Can my existing devices be upgraded?

A: It depends. The higher bandwidth of HDMI 2.1 requires more advanced processors on the display, so it is unlikely that any existing display will be able to support higher resolutions or refresh rates. On the other hand, most of the additional features require very little additional bandwidth, and although they require fairly significant firmware changes, it is possible to implement them on existing devices. With regards to eARC, specifically, multiple manufacturers have announced plans to support it on existing receivers, and some have already received firmware upgrades.

Q: When can we expect more HDMI 2.1 devices?

HDMI 2.1 is a significant upgrade. The first generation of HDMI 2.1 devices are likely to be more expensive, and won't take full advantage of the new technology, so we don't recommend waiting just for HDMI 2.1. That being said, if you are looking to future-proof your home theater, there are many displays and other devices being released in 2019 that will support at least some of the HDMI 2.1 features.

Be the first to start a discussion about What is HDMI 2.1? An overview