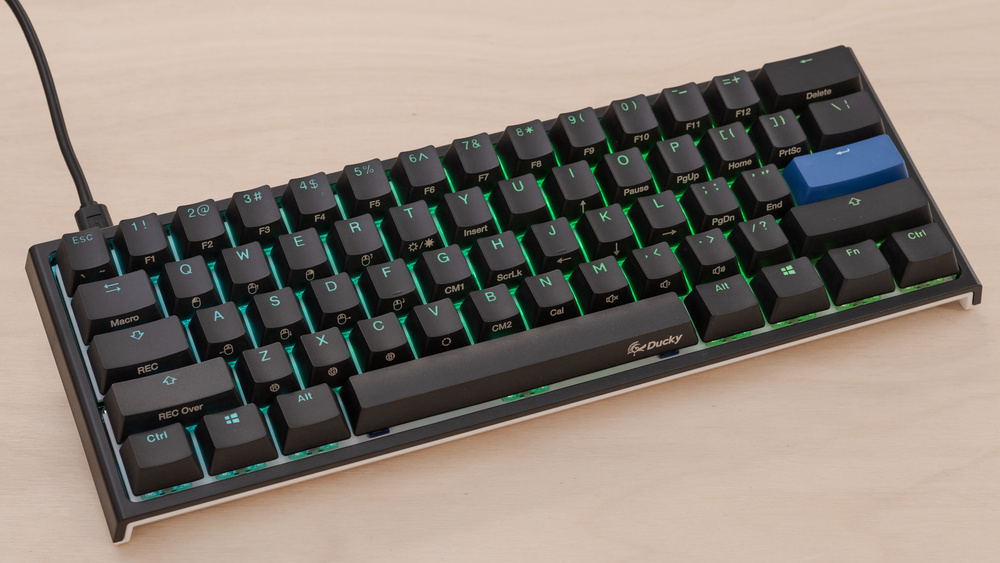 The Ducky One 2 Mini V2 is a 60% compact mechanical gaming keyboard. It's almost identical to the Ducky One 2 Mini V1, but it has some small physical and performance differences. The variant we tested has tactile Cherry MX Brown switches, which feel light and responsive, but it's also available in a variety of Cherry MX, Gateron, and Kailh switches, so you can choose which switch type you like best. You can set macros to any key and change the RGB backlighting effects, but you need to do it directly from the keyboard since it doesn't have customization software like most keyboards do. Unfortunately, its click latency is quite high, which isn't ideal for gaming since there's a noticeable lag. Note that at the time of writing, this keyboard is hard to find available at most resellers, and we purchased our unit from MechanicalKeyboards.com.

The Ducky One 2 Mini V2 is excellent for gaming, but its high latency may not be ideal for fast-paced games where accuracy is crucial. The Cherry MX Brown switches have a low operating force and a short pre-travel distance, which should result in a light and responsive gaming experience. It has customizable RGB backlighting, macro-programmable keys, and a sturdy feel. Unfortunately, it doesn't come with a wrist rest. Also, it doesn't have customization software, so any setting changes you make need to be done on the keyboard itself.

The Ducky One 2 Mini V2 is a wired-only keyboard and isn't designed to be used with mobile devices or tablets.

The Ducky One 2 Mini V2 is great for office use. The Cherry MX Brown switches on our unit felt light and responsive, and they're quiet enough that the sound shouldn't bother those around you, even in a noise-sensitive environment. Unfortunately, it doesn't come with a wrist rest, but its straight design and two incline settings should be comfortable enough without one. Also, it doesn't have dedicated arrow keys, which may be a bother to some.

The Ducky One 2 Mini V2 is great for programming. This very well-built keyboard has customizable RGB backlighting and macro-programmable keys. The Cherry MX Brown switches on our unit felt light and responsive. Unfortunately, it isn't wireless, so you can't pair it to multiple devices at once. Also, it doesn't come with a wrist rest, but its straight design and two incline settings should be comfortable enough without one.

The Ducky One 2 Mini V2 isn't ideal for home theater PC setups since it's a wired keyboard. It lacks a trackpad, so you need a mouse on the side to navigate the user interface. On the plus side, it does have RGB backlighting and media hotkeys.

We tested the Ducky One 2 Mini V2 with Cherry MX Brown switches, but it's also available in a wide variety of switches, which you can see in the table below. It's nearly identical to the Ducky One 2 Mini V1 but with some slight differences like firmware updates, updated DIP switch functions, and two additional LEDs under the spacebar. There are some variants with different sizes, like the full-sized Ducky One 2, the TenKeyLess Ducky One 2 RGB TKL, and the Ducky One 2 SF, which has a 65% layout with dedicated arrow keys.

If you have a Ducky One 2 Mini V2 that doesn't correspond to our review, please let us know in the discussions and we'll update it. You can see the label of our unit here.

The Ducky One 2 Mini V2 is a compact wired mechanical keyboard available in an incredibly wide range of switches, so you have more freedom to pick the exact switches you like. However, unlike other keyboards, this one doesn't have any customization software to easily make adjustments, so any setting changes you make need to be done directly from the board.

For other options, see our recommendations for the best gaming keyboards, the best keyboards for writers, and the best mechanical keyboards.

The Razer Huntsman Mini and the Ducky One 2 Mini V2 are both 60% compact wired mechanical keyboards, but the Razer is overall better for gaming. The Razer has a significantly lower latency so you shouldn't notice any delay even while playing fast-paced games, and it has easy-to-use software for RGB customization and macro programming. Also, the Razer feels much better-built, thanks to its plastic and aluminum frame. While both are available with different switch types, the Razer is only available with proprietary optical switches, whereas the Ducky is available with Cherry Mx, Gateron, and Kailh switches.

The Ducky One 2 Mini V2 and the Corsair K65 RGB MINI are compact 60% keyboards. The Ducky is a keyboard better suited for a variety of uses. It has multiple incline settings, and it's available with a range of Cherry MX, Gateron, and Kailh switches. However, it feels slightly less sturdily built, and the feet sometimes collapse when you move the keyboard. On the other hand, the Corsair is a better gaming keyboard with remarkably lower latency and linear Cherry MX Speed switches.

The Ducky One 2 Mini V1 and the Ducky One 2 Mini V2 are nearly identical, except for some minor differences. Both are wired, 60% compact keyboards, but the V2 has a slightly longer cable. Also, the V2 has a much higher latency than the V1, so it isn't recommended for serious gamers since there may be a noticeable lag. Otherwise, they both have full RGB backlighting and macro-programmable keys. Also, both lack customization software, so any setting changes you make need to be done on the keyboard directly.

The Ducky One 2 Mini V2 is a great gaming keyboard if you want something prebuilt, while the GLORIOUS GMMK PRO is a barebones keyboard for mixed usage. The Ducky is a compact 60% keyboard with no dedicated function row or arrow keys. It's available with a variety of Cherry MX, Gateron, Kailh, and TTC switches. On the other hand, the GLORIOUS doesn't come with any switches or keycaps, so you can choose whichever ones you like most. It comes in two colors and has a programmable rotary knob which you can also swap for a different color. The GLORIOUS also has much lower latency once you update it to the latest firmware.

The Obinslab Anne Pro 2 and the Ducky One 2 Mini V2 are both compact 60% mechanical keyboards. If you want something that you can pair with multiple devices at once, the Obinslab is a better choice since it's wireless. It's also a better choice for gaming thanks to its exceptionally low latency when used over a wired connection, unlike the Ducky's latency which is significantly higher. The Obinslab also has a customization software to set macros and change the backlighting, although it can be hard to use. Both keyboards are available in a wide variety of Cherry MX, Gateron, and Kailh switches.

The HyperX Alloy Origins 60 and the Ducky One 2 Mini V2 are both 60% compact mechanical keyboards, but the HyperX is better for gaming thanks to its significantly lower latency. Also, it has easy-to-use customization software to set macros and change the RGB backlighting. However, the HyperX isn't as good as the Ducky at color mixing. If you don't like the feel of linear switches, the Ducky is a better choice since it's available in a variety of Cherry MX, Gateron, and Kailh switches.

The Ducky One 2 Mini V2 feels very well-built. Its two-tone plastic body feels solid and has only a small amount of flex to it. The doubleshot PBT keycaps feel nice and stable, and there's no rattling when shaking the keyboard. There are secondary functions printed onto the front-facing side of the keys, so they're easy to see when using the keyboard; however, light doesn't shine through them. It has four rubber points on the underside that provide good grip, but the incline feet are noticeably worse at keeping the keyboard in place and sometimes collapse when the keyboard is moved.

The ergonomics are just okay. It has two incline settings, and while it doesn’t come with a wrist rest, typing on it should feel comfortable enough without one. The incline feet aren't very grippy, and they don't prevent it from moving around very well.

It has full RGB backlighting with individually-lit keys. While it doesn’t have downloadable software, you can customize the color, change the lighting effects, and adjust the brightness directly from the keyboard. It's great at color mixing, and while there’s a bit of a pink hue to letters when the lighting is set to white, we determined this is because of the black color of the keycaps. When we swapped out the keys with white ones, the pink hue wasn’t visible.

While there isn’t software to customize the Ducky One 2 Mini V2, you can make all of your settings changes directly from the keyboard itself and save them to the onboard memory. You can set macros and change the backlighting effects using the hotkeys. There are also DIP switches on the underside of the keyboard that let you change the location of the Windows key, FN key, and Caps Lock key. You can also play Minesweeper and turn on the Ducky Gamble Mode on the keyboard.

The Ducky One 2 Mini V2 variant we tested uses tactile Cherry MX Brown switches, which feel light and responsive. It's available in a variety of Cherry MX, Gateron, and Kailh switches which will perform differently.

It has fantastic typing quality. The PBT keycaps feel very nice to type on and feel very stable. They have a nice concave curve that helps differentiate between keys. Despite being a compact keyboard, the spacing doesn't feel too cramped, so you shouldn't be making more typos than usual. The Cherry MX Brown switches feel responsive and offer tactile feedback, which is helpful to let you know when your key is registered. It's also available in a variety of Cherry MX, Gateron, and Kailh switches, which will result in a different typing experience.

The Cherry MX Brown switches on our unit are quiet. However, the sound may differ depending on the switch type you get.

It doesn't have any customization software available. However, you can set macros and change the RGB backlighting directly on the keyboard, and save your settings to the onboard memory. If you prefer a compact 60% board with software, check out the Redragon Dragonborn K630 RGB.

It's fully compatible with Windows, but the calculator hotkey doesn't work on macOS or Linux. Ducky released a firmware update (v1.10) that claims to have addressed macOS compatibility. When retested with this updated firmware, the calculator and print screen buttons don't work on macOS. However, this is likely a limitation of the Mac compatibility test, and your own experience may differ.