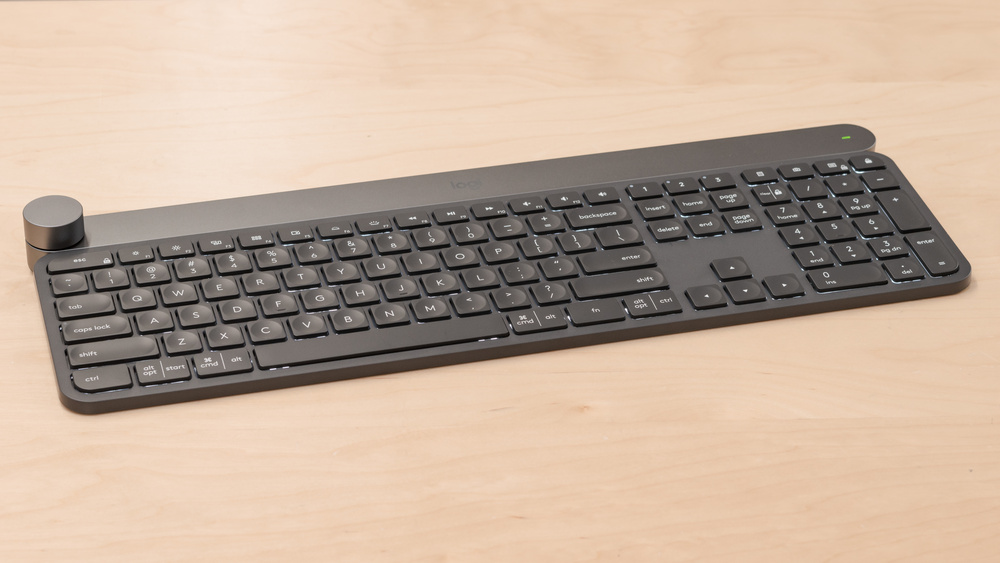 The Logitech Craft is a good, versatile wireless keyboard. It's ultimately very similar to the Logitech MX Keys, except it has a unique creative input dial on the top of the keyboard that can be programmed to undertake different tasks depending on the software you're using. Typing feels great, due to indentations on each key that should help reduce typos, while the tactile switches are quiet and stable. While there are programmable buttons, they're limited to a list of preset features and unfortunately, you can't set any macros. Ergonomics are only decent, as there are no adjustable incline settings, but the low profile should make for a comfortable typing experience. That said, you can pair it with up to three different devices and switch between them at the press of a button.

The Logitech Craft is a good keyboard for casual gaming. The ergonomics are decent, despite the lack of any incline settings due to the low profile. The keys have a low amount of pre-travel and they don't need a lot of force to actuate. The creative input dial complements various Office and Adobe software as well. That said, while there is a white backlight, there's no RGB lighting and you can't set any macros.

The Logitech Craft is a mediocre choice for use with your mobile or tablet. While it's not designed to function as a keyboard for tablets or smartphones, it does have Bluetooth support and can be paired with multiple devices. That being said, it's rather large and bulky, making it very difficult to travel with.

The Logitech Craft keyboard is very good for office use. It has decent ergonomics due to its low profile, which makes up for the lack of a wrist rest and adjustable incline settings. The typing experience is great due to the keys' low travel distance and minimal force needed to actuate them. Also, the keys are very quiet and shouldn't disturb anyone around you.

The Logitech Craft is a decent keyboard for programming. The satisfactory ergonomics and solid build complement the great typing experience. However, there are no programmable macros and the companion software doesn't work on Linux.

The Logitech Craft keyboard is a very good choice for office work. It's incredibly similar to the Logitech MX Keys, except that it includes a unique dial on the top left-hand side of the board that allows for specific interactions, such as controlling audio levels and browsing multiple tabs. The typing experience is great due to the low pre-travel distance and the tactile keys are quiet, which is great if you're bringing it to the office. See our recommendations for the best keyboards, the best wireless keyboards, and the best keyboards for writers.

The Logitech MX Keys is a better wireless keyboard than the Logitech Craft. The two keyboards offer a very similar experience. While the MX Keys lacks the Craft's unique dial, it may represent a better value for some people.

The Logitech G915 LIGHTSPEED and the Logitech Craft are both low-profile wireless keyboards, but they're designed for different purposes. The G915 is a low-profile mechanical gaming keyboard with lower latency, full RGB backlighting, and dedicated macro keys. It's also available in either tactile, clicky, or linear switches. On the other hand, the Craft is a non-mechanical, low-profile keyboard intended for office and productivity use. It has standard scissor switches and can be paired with three devices simultaneously, while the G915 can only pair with two.

The Logitech Craft is a better wireless keyboard than the Logitech K780. The Craft has a white backlight, has a rechargeable battery, and has a detachable charging cable. On the other hand, the K780 is fully compatible with both Windows and macOS and is a bit quieter than the Craft.

The build quality is great. The frame is made of both metal and plastic, with only a little bit of flex. The keycaps have circular grooves indented into the plastic, which should result in a better typing experience. The dial found on the top left-hand side of the keyboard is made of metal and doesn't feel flimsy or cheap.

The ergonomics on the Logitech Craft keyboard are decent. It's a straight keyboard with no incline settings or wrist rest; however, due to the low profile, most people should still find typing comfortable. There are rubber grips under the keyboard to prevent it from sliding as long as you don't apply too much force.

The Logitech Craft advanced keyboard has outstanding backlighting capabilities. While there are no RGB settings and the backlight is limited to white-only, it lines up with the more professional design of the keyboard. It detects your hands as soon as they go over the keyboard, which automatically activates the backlight.

The Logitech Craft charges with a detachable USB-C cable, which is included.

The Logitech Craft wireless keyboard has outstanding wireless versatility, as it can be used over Bluetooth or its proprietary receiver and can be paired with up to three devices.

The Logitech Craft keyboard has a unique dial on the top left-hand side of the keyboard. Depending on how you use it, it can perform a variety of tasks. It can adjust volume, scroll through tabs in a browser, and can be set to control various tools in programs like Adobe Photoshop and Premiere. Furthermore, there are media hotkeys on the top of the keyboard and the f-keys can be reprogrammed in the companion software.

This keyboard uses scissor switches that have a pronounced tactile bump and a very low pre-travel distance. The keys have a low actuation point and don't need a lot of force to register. It feels very similar to the Logitech MX Keys.

The Logitech Craft keyboard's typing quality is impressive. Despite the low profile of the keyboard, the tactile keys themselves are quite stable and very quiet. The circle grooves should help keep typos to a minimum.

Typing noise is very quiet and shouldn't bother anyone around you.

The Logitech Craft uses the Logitech Options software to reprogram your f-keys and customize the dial. The keyboard works on both Windows and macOS and the software allows you to sync your settings to the cloud. Unfortunately, you can't program macros and there's no onboard memory.

This keyboard has great compatibility. While it's fully compatible with Windows, some buttons, such as 'insert' and 'screenshot', don't work on macOS.