Driven by data, run by a passionate team of engineers, testers, technical writers, developers, and more.
We are hiring!
Black Friday deal: The Razer BlackWidow V3 has dropped by $20 on Amazon.com. See all Keyboard deals. 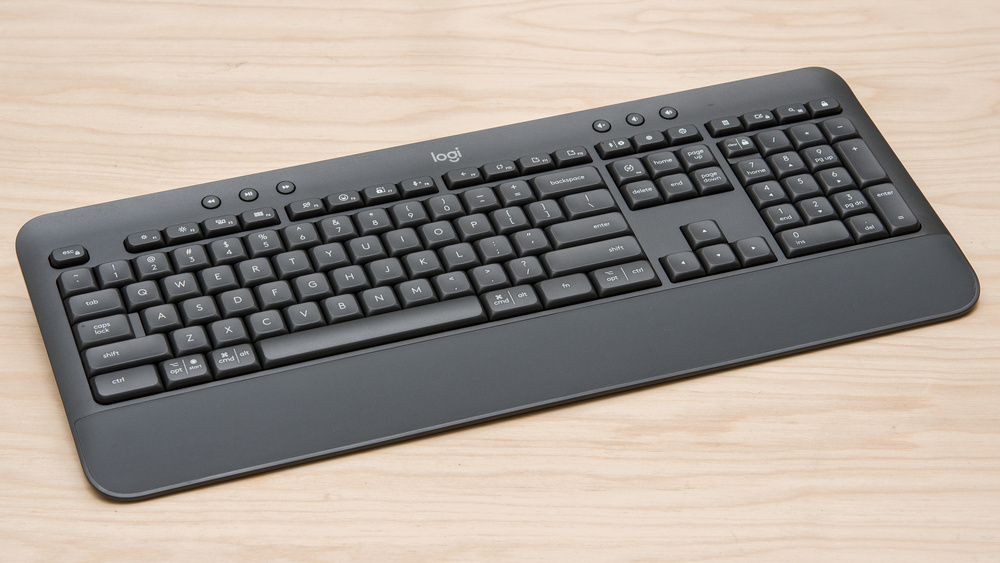 The Logitech Signature K650 is a wireless keyboard designed for office use. It's a very straightforward unit with rubber dome switches and very few extra features as it's meant to be a simple plug-and-play keyboard for basic productivity and typing tasks. You can purchase it on its own or in a bundle with its companion mouse, the Logitech Signature M650.

Since it isn't designed for this use, the Logitech Signature K650 is a pretty unremarkable gaming keyboard. Its latency is too high for competitive gaming, but is perfectly fine for casual gaming. Also, its companion software is pretty limited in customizability, so you can't program macros or change much about the keyboard. On the upside, it has pretty good ergonomics, so it feels comfortable to type on for a while, but it won't provide you with a responsive or satisfying gaming experience.

The Logitech Signature K650 is a passable keyboard for use with mobile devices. While it isn't very portable, it's fully wireless but doesn't support multi-device pairing with Bluetooth. It's also compatible with all mobile operating systems, but a few of the function keys don't work as some functions aren't supported by certain operating systems.

The Logitech Signature K650 is a decent office keyboard. The built-in palm rest and incline settings keep you comfortable while you type and the rubber dome switches inside the boards are quiet to use. It also has legends for both macOS and Windows systems and modes for full compatibility with either operating system. Also, it comes with a Logi BOLT receiver, so you can use one receiver to connect with this keyboard and a compatible Logitech mouse, or you can pair it with a device using Bluetooth.

The Logitech Signature K650 is an inadequate keyboard for programming since it can't program macros and pair with multiple devices over Bluetooth. It also doesn't offer a very satisfying typing experience, and it doesn't feel very well-built. Plus, it doesn't have any backlighting.

The Logitech Signature K650 is a poor keyboard to use in a home theater PC setup. Although it's wireless and has dedicated media keys, its build quality is only okay, and it'll flex considerably if you sit with it on your lap. Also, it lacks backlighting, so you'll have a hard time reading the keys in the dark. Plus, you'll have to use another peripheral for on-screen navigation as it lacks a trackpad or trackball.

The Logitech Signature K650 is a very straightforward wireless keyboard designed for general or office use. It connects wirelessly with an included Logi BOLT receiver, which you can use with other select Logitech products like its companion mouse, the Logitech Signature M650, so you only need one USB receiver for multiple products. It's very similar in design to the Logitech K800, with a built-in palm rest, low profile keys, and multiple incline settings. However, the K650 has a slightly improved build quality that feels slightly less cheap than the K800, and there aren't any exposed moving parts making it more resistant to spills or crumbs. Overall, it's a very basic rubber dome keyboard that offers good ergonomic support but a rather unsatisfying typing experience.

For more recommendations, see our picks for the best cheap keyboards, the best quiet keyboards, and the best keyboards for typing.

The Logitech K800 and the Logitech Signature K650 are two very similar budget wireless keyboards. However, the K800 only works with a USB receiver, while K650 uses a USB receiver and Bluetooth for connectivity. Otherwise, they offer a similar cheap-feeling build quality and fairly unsatisfying typing experience.

The Logitech K780 is a much better wireless keyboard than the Logitech Signature K650. The K780 supports Bluetooth connections with up to three devices, plus it uses a USB receiver and has a device tray to hold your devices up at a nice angle. It also uses scissor switches that feel more satisfying to type on than the mushy rubber domes on the K650. The K650 has better ergonomic support, and its keycaps are more typical square tiles rather than circles.

The Logitech Signature K650 and the Logitech K350 are two budget wireless keyboards with some notable differences. The K350 is a much older keyboard, so many of its functions no longer work with newer operating systems, and the shortcut functions themselves are pretty outdated, like shortcuts to bring up Internet Explorer and MSN Messenger. The K650 is a more recent release, so it's compatible with newer systems and has more relevant shortcut functions, like a mute button for video calls, an emoji button, and a language switching button.

The Logitech Signature K650 is a full-sized keyboard with a fixed wrist rest, so it takes up a fair amount of space.

The Logitech Signature K650 has an okay build quality. It's an all-plastic board with a chassis that flexes quite a bit. Also, when you place the keyboard onto a flat surface, there's noticeable flex in the middle of the board. Since the chassis and base plate don't leave any of the circuit board or switches exposed, this keyboard is rated as spill-resistant for up to 60ml of liquid. The ABS keycaps have a nice texture and feel incredibly stable with no rattle or wobble. They also feel slightly more premium than most other ABS keycaps. However, the key legends are stickers, so they're more prone to losing their adhesion and falling off over time. On the bottom of the board, the five rubber feet do a pretty good job of keeping the board in place, and there's also a battery compartment with a slot for the USB receiver. This cover feels fairly solid and isn't prone to coming loose. It's also worth mentioning that there's a power switch on the right hand side.

The Logitech Signature K650 has good ergonomics. It has a built-in plastic wrist rest on the bottom that's covered with a soft-touch material, and there are two incline settings. Also, it has a fairly low profile with keys deeply set into the board so they aren't as high up to reach.

This keyboard doesn't have any backlighting.

This keyboard is fully wireless and doesn't include a cable.

The Logitech Signature K650 has decent wireless versatility. You can connect it with one device via Bluetooth and one with the included Logi BOLT receiver. It uses two AA batteries for power with an advertised battery life of up to 36 months.

The Logitech Signature K650 has a few extra features mostly in the form of shortcut keys along the function row. Some of these function keys include an emoji shortcut, mute, screen capture, and a lock user function. There's also a button in the navigational cluster to change the keyboard's language on the fly. Only these F1-F12 keys can be remapped or have their functions altered. You can switch between operating system modes by pressing FN+P for Windows, FN+O for macOS, and FN+C for ChromeOS. A complete guide to this is in the user documentation.

The Logitech Signature K650 doesn't feel bad to type on, but it isn't very satisfying. The ABS keycaps feel nice, and they're very stable thanks to their deep stems. They also have a slightly rounded edge to better differentiate between the keys to promote better typing accuracy. The layout is standard and doesn't feel too cramped, so there's no learning curve for getting used to the board. Unfortunately, the actuation point of each key is fairly inconsistent; however, it usually comes after the tactile bump, meaning you have to bottom out each key to register a keypress. Although the ergonomic features offer good support for your wrists, the constant bottoming out does cause finger fatigue over long periods.

Thanks to the rubber dome switches, typing on this keyboard is very quiet.

The Logitech Signature K650 has decent latency. It's too high for competitive gaming but perfectly fine for casual gaming and regular productivity tasks.

This keyboard uses Logitech Options+ software for customization. It's fairly limited as you can only remap the function row keys. While you can't create profiles, you can assign different settings that are application specific.

The Logitech Signature K650 is fully compatible with Windows and macOS, though some of the function shortcuts require permissions to work. The companion software is only available for macOS and Windows, so you can't remap key functions on any mobile operating system or Linux. While all alphanumeric keys work as intended on Linux and the mobile operating systems, some of the function key shortcuts don't work depending on the system.