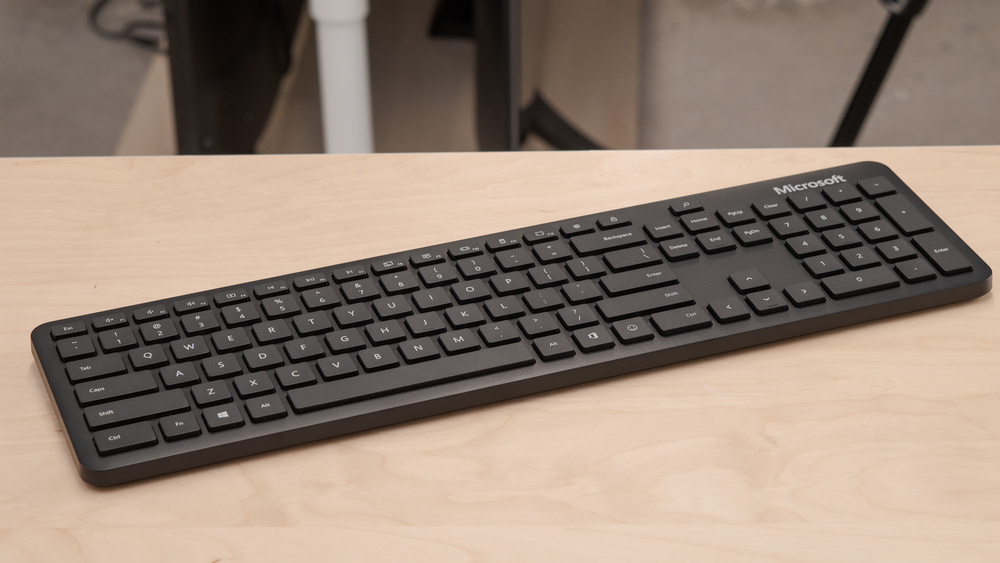 The Microsoft Bluetooth Keyboard is a very straightforward wireless keyboard. It has typical rubber dome switches that can be found on other similar office keyboards that offer a good overall typing experience, although some may find them to be a bit mushy. It's well-built even though it's entirely made of plastic and is well-suited for an open-office environment as typing on it isn't loud at all. Unfortunately, it lacks backlighting, which might be a deal-breaker for some, but it's one of the most versatile keyboards since it works with pretty much any Bluetooth-compatible device, including mobile devices.

The Microsoft Bluetooth Keyboard isn't designed for gaming. We don't currently test latency, but a Bluetooth connection is rarely recommended for gaming. Also, while it can set macros, the F4-F7 keys aren't the best-positioned keys to use when gaming. It also lacks backlighting, which might be a deal-breaker for some.

Mediocre for using with mobile devices or tablets. Although the Microsoft Bluetooth Keyboard is Bluetooth-compatible and works with mobile devices, this full-size board isn't the most portable. It might be a bit hard to fit inside a backpack and you can't connect it to multiple devices simultaneously.

The Microsoft Bluetooth Keyboard is a good office keyboard. Its wireless design clears up a bit of clutter on your desk and its low-profile design is decently ergonomic to type on during your workday. Its rubber dome switches are very quiet to use in an open office environment and it offers a good overall typing experience.

The Microsoft Bluetooth Keyboard is an okay keyboard for programming. Although its typing experience is good, you can only set a few macros on the F4-F7 keys, which might not be enough for some. On the upside, its wireless design gives a cleaner setup.

The Microsoft Bluetooth Keyboard is nothing special. It's a typical wireless full-size keyboard with rubber dome switches, and it doesn't have many extra features. You can set macros to a few select keys, but that's about it. It lacks backlighting so it might not be the best option for late-night workers. For more options, see our recommendations for the best keyboards, the best wireless keyboards, and the best keyboards for writers.

The Logitech MX Keys is better than the Microsoft Bluetooth Keyboard. It feels more high-end, has white backlighting, offers a better overall typing quality, and can be connected to up to three devices simultaneously. However, if you don't like scissor switches and prefer a bit longer travel distance, go with the Microsoft and its rubber dome switches.

The Logitech K780 is more versatile than the Microsoft Bluetooth Keyboard. It can be used with its USB receiver and via Bluetooth and its design offers a little cradle for your mobile devices, which is very useful. However, if you don't like circular keys, you might want to go with the Microsoft keyboard with its more typical square chiclet keys.

This is a full-size keyboard that doesn't take too much space. It also doesn't come with a wrist rest, which would have taken more desk space.

This keyboard is well-built. Its frame is made out of plastic, and although there's some flex to the body, it still feels solid overall. The keycaps are stable, but the switches might feel a bit mushy when typing.

The Microsoft Bluetooth Keyboard's ergonomics are decent. Even if it doesn't have any incline settings or included wrist rest, this low-profile and straight board is decently comfortable to type on and you shouldn't feel too much fatigue. If you're interested in a similar, straightforward keyboard with better built-in ergonomic features, check out the Logitech Signature K650.

This keyboard doesn't have any backlighting, which isn't ideal if you work in environments that don't have enough light.

This wireless-only keyboard uses disposable batteries, so it doesn't come with any cable.

This Bluetooth keyboard can unfortunately only be used with a single compatible device. If you want a keyboard that has multi-device pairing, check out the Keychron K4.

The whole F row doubles down as hotkeys, including media keys. The only programmable macros are the F4-F7 keys, which are the media keys. On the upside, these macros can be pretty much anything and aren't only from a preset list of options. This full-size board also has a NumPad on its right side.

Like most keyboards with this design, the Microsoft Bluetooth Keyboard has tactile rubber dome switches that require a lot of force go over the tactile bump before the actuation point. This results in a heavier typing experience, but the short travel distance helps making it lighter.

The overall typing quality on this keyboard is good. There's nothing too special about it, as the stable keys offer decent feedback. Some may feel like the rubber dome switches are a bit mushy, but most should be satisfied with the typing experience.

Typing on the Microsoft Bluetooth Keyboard doesn't make much noise. It's very quiet and should be suitable for use in an environment with people surrounding you.

The Mouse and Keyboard Center software offers very limited customization. The only thing you can really do with it is program the macros on the F4-F7 keys. The software is also only compatible with Windows.

Thanks to its Bluetooth connection, this keyboard has excellent compatibility. It works pretty much with every platform, although some keys don't work depending on which OS you're on. Nevertheless, all alphanumeric keys work on all platforms.