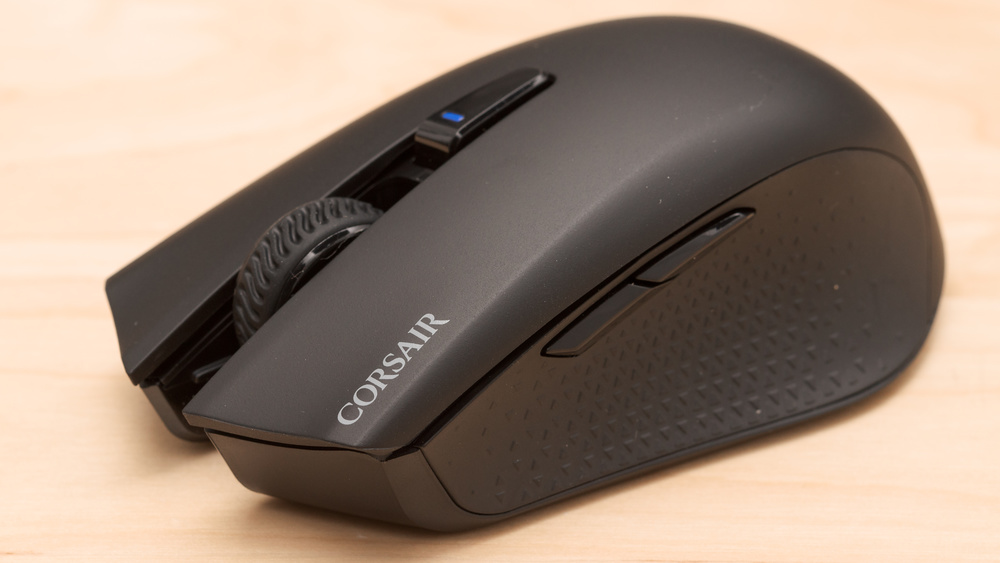 The Corsair HARPOON Wireless is a compact, wireless gaming mouse. Its small and versatile design makes it a great choice for tossing into a laptop bag and bringing with you, as well as using with your gaming setup at home. It has superb click latency when connected wirelessly with its USB receiver or with its included charging cable. It also has Bluetooth support, but this connection mode isn't recommended for gaming. Despite being small, people with any hand size will be able to use this mouse with a claw grip, though small hands may have difficulties reaching all the buttons using a palm grip.

The Corsair HARPOON RGB Wireless is a very good mouse for office and multimedia use thanks to its decently comfortable design and a good amount of programmable buttons. It can be used comfortably with claw grip by any hand size, though people with small hands will likely have a hard time reaching all the buttons with fingertip grip. It's compact enough that you can easily toss it into your laptop case, and it can connect to your laptop via Bluetooth so you don't need to bring any dongles with you, which is great.

The Corsair HARPOON RGB Wireless is a great mouse for FPS games. Its click latency is extremely low, and its CPI is customizable and very consistent. It has two additional side buttons, and all six buttons can be reprogrammed via Corsair's iCUE software. It's reasonably lightweight; everyone should be able to comfortably reach all the buttons when using claw grip, and only small hands will likely have a harder time with fingertip grip.

The Corsair HARPOON RGB Wireless is a good MMO mouse. While it doesn't have nearly as many buttons as dedicated MMO mice, every button is programmable on both Windows and macOS, which is great. It's suitable for any hand size with claw grip, and only those with small hands will have a hard time reaching the side buttons with fingertip grip.

The Corsair HARPOON Wireless is a great mouse for travel thanks to its compact and wireless design that can be used via Bluetooth without the need for any dongles or USB receivers if your laptop is Bluetooth-enabled. It feels durable enough to handle being tossed into a laptop case and is comfortable for all hand sizes when using claw grip.

The Corsair HARPOON Wireless is a compact gaming mouse similar to the Logitech G305 and the Razer Atheris. Unlike most gaming mice which are rather large and bulky, it can easily be tossed into a laptop case and brought with you on-the-go. See our recommendations for the best wireless mouse, the best Corsair mouse, and the best gaming mouse.

The Corsair HARPOON RGB Wireless and the Logitech G305 LIGHTSPEED are both great wireless FPS gaming mice. The Corsair can be used with its USB receiver, as well as with Bluetooth or wired, while the Logitech can only be used with its proprietary receiver. While the Logitech has a wider and more adjustable CPI range, the Corsair's sensor performance is slightly more consistent. Both mice are recommended for a claw or fingertip grip, though those with small hands will be better off with the Logitech, and extra-large hands will have a better time with the Corsair.

The Corsair HARPOON RGB Wireless is a better gaming mouse than the Razer Basilisk X Hyperspeed. While the Razer is wireless-only, the Corsair can be used wireless or wired while charging. The Razer is a bit heavier and larger, which makes it better suited for palm grip. Meanwhile, the more compact and portable Corsair is best for all hand sizes with a claw grip. While the Razer has a much wider and more adjustable CPI range, the Corsair's CPI is slightly more consistent.

The Corsair HARPOON RGB PRO is an updated, wired version of the Corsair HARPOON RGB Wireless. The HARPOON RGB PRO is significantly lighter, has a lower lift-off distance, a broader CPI range, a more precisely adjustable CPI, and onboard memory for settings. On the other hand, the HARPOON RGB Wireless connects via a USB receiver or Bluetooth. It has a lower click latency and a much more consistent sensor. Both mice are ideal for nearly all hand sizes with a claw or fingertip grip and smaller hands for a palm grip.

The Corsair DARK CORE RGB PRO is better than the Corsair HARPOON RGB Wireless. The DARK CORE feels better-built and more comfortable. It also has more buttons, a wider CPI range, and the CPI can be adjusted by increments of 1. However, the HARPOON has less CPI variation, and it's much lighter.

The Razer Viper Ultimate is a better gaming mouse than the Corsair HARPOON RGB Wireless. The Razer is lighter and has a much more comfortable and durable feeling. Both mice are only suitable for palm grip with small or medium hands. While the Corsair can be used by all hand sizes with a claw grip, people with extra-large hands will only get a comfortable grip of the Razer when using a fingertip grip. The Razer has a much wider and more adjustable CPI range, though the sensor on the Corsair is more consistent. The Razer has more programmable buttons, and its L/R click buttons are optical instead of mechanical.

The Corsair HARPOON RGB Wireless is a better gaming mouse than the Razer Atheris. The Corsair is lighter weight, feels better built, is rechargeable, has a wider adjustable CPI range, and lower click latency. On the other hand, the Razer has more programmable buttons. The Corsair is suitable for any hand size with a claw grip, while the Razer is best recommended for fingertip grip.

The SteelSeries Rival 650 is better than the Corsair HARPOON RGB Wireless. The SteelSeries is better-built, feels more comfortable, has more buttons, and has a lower lift-off distance. However, the Corsair has Bluetooth support, it's lighter, and it has lower click latency over its USB receiver.

The Corsair HARPOON RGB Wireless and the Razer Mamba Wireless are both very good gaming mice, but the Corsair has a smaller form factor that's easier to take around with you. It also can be used via Bluetooth and has low click latency regardless of which connection type you use. The Razer feels more durable and is much more comfortable, thanks to its larger body. Most people will have an easier time using the Corsair with a claw or fingertip grip, while the Razer is best suited for a palm grip.

The Corsair HARPOON RGB Wireless is a compact gaming mouse with a fairly straight-forward black design. There's RGB lighting on the logo on the back, as well as on the CPI switch button. 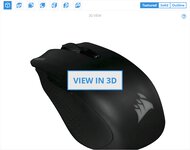 This is a very portable mouse thanks to its compact and wireless design. You should have no problem tossing it into most laptop cases or bags, and it's a great companion to go with a gaming laptop.

The Corsair HARPOON Wireless' build quality is good. The entire mouse is made of good quality matte plastic. There is a small amount of wobble on the main L/R click buttons, though it's unlikely that this will be at all noticeable during regular use. The side buttons can also be activated by pressing hard enough on the side of the frame, though again, this likely won't be an issue during regular use.

The Corsair HARPOON Wireless is a fairly lightweight mouse when used without a wire.

This mouse is decently comfortable. It has a very slight right-handed slant but could still likely be used for either hand. Its compact size makes it a bit less comfortable than larger mice, but it's still more pleasant to grip than the Razer Atheris, which has a similar design.

This mouse is quite compact and is best used in palm grip by smaller hands, even people with medium hands may find it a bit on the small side. Larger hands will find it too cramped, and their fingers will hang too far off the front.

This mouse is great for claw grip, as any hand size should be able to use it comfortably and reach all the buttons.

Everyone except those with small hands should be able to use this mouse well with fingertip grip. Small hands may have a hard time reaching the front side button.

The Corsair HARPOON RGB Wireless can be used wireless with either its USB receiver or via Bluetooth as well, which is great if you have a Bluetooth-enabled laptop and don't want to bring the USB dongle with you. You can also plug the mouse in via Micro USB and use it while charging. If you prefer a wired-only mouse, then check out the Corsair HARPOON RGB.

The included Micro USB cable is decent. It's a braided cable that is quite rigid and maintained a lot of kinks from the packaging.

The Corsair HARPOON Wireless has two side buttons, a CPI switch button, and a mouse wheel button. Along with the L/R clicks, all of these buttons can be reprogrammed within the software. If you want a wireless mouse with more programmable inputs, look into the SteelSeries Rival 650. If you'd like a wireless mouse with a dedicated sniper button and tilt gesture support, check out the Corsair M65 RGB ULTRA WIRELESS.

The Corsair HARPOON RGB Wireless' click latency is superb and very consistent using a wired or wireless receiver connection. Playing games in any genre will feel very snappy and responsive, and you won't notice any perceptible delays. The latency is higher and more irregular over a Bluetooth connection, but this is completely normal as this connection type isn't intended for gaming.

The mouse wheel is only mediocre as it doesn't have a horizontal scroll or L/R buttons. The mouse wheel itself has pronounced increments that feel very clicky. Our mouse almost felt like the wheel was scraping as you scroll, though this may go away over time and might just be specific to our unit.

The software for this mouse is great. It's fully compatible with both Windows and macOS, which is great, but unfortunately, this mouse doesn't feature on-board memory, so customization settings won't stick with the mouse if you use it on a different PC.

Corsair's iCUE software is fully compatible with both Windows and macOS, so you have access to all customization options on either OS.