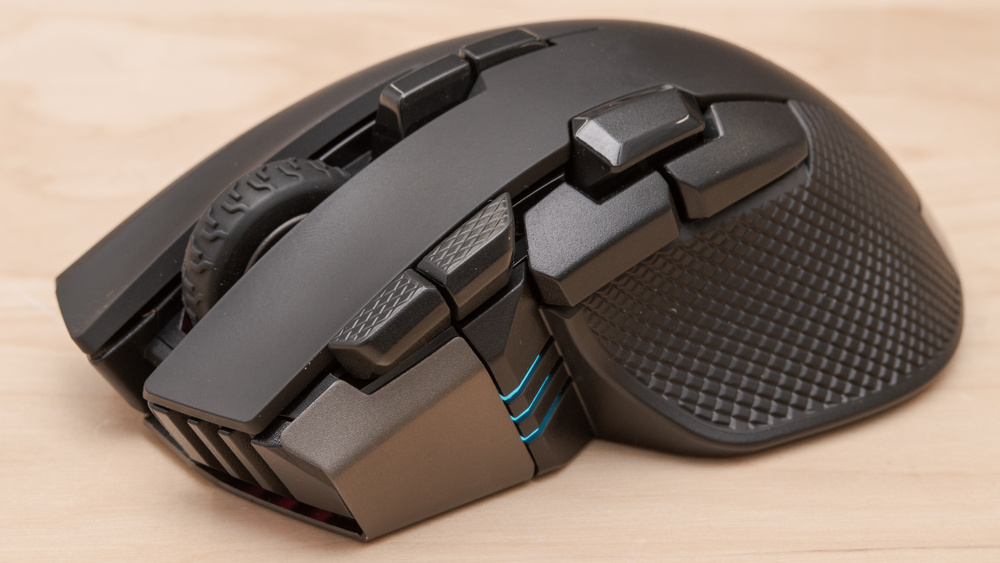 The Corsair IRONCLAW Wireless is a good overall gaming mouse. This mouse is rather large and has a right-slanted design, with a thumb rest, meaning a palm grip is recommended for it. It has amazing sensor performance and very low click latency, whether wired or wireless. However, it's a heavy mouse that not everyone will prefer. Its buttons are also awkwardly positioned and might take some time getting used to. On the upside, the mouse is very well-built, and will be better suited for larger hands.

The Corsair IRONCLAW Wireless is a great office mouse thanks to its wireless design and fairly ergonomic design for right-handed people. It's very comfortable to use in a palm grip thanks to its high body, right slanted design, and thumb rest. It also has a good amount of buttons to make workflow a bit more fluid.

The Corsair IRONCLAW is a fairly good mouse for video games like FPS. Its click latency is extremely low when used with its receiver or when wired, which makes it feel very responsive. However, the mouse is big and heavy, and some people might prefer a lighter option for FPS games.

The Corsair IRONCLAW is a very good mouse for MMO games. It has amazing performance and has a few extra buttons, giving you a bit more inputs for abilities. However, this won't be as ideal as a dedicated MMO mouse with a side panel with 9 or 12 buttons.

The Corsair IRONCLAW Wireless is not designed to be an ultra-light gaming mouse. It's rather big and heavy and won't be suitable for this use.

The Corsair IRONCLAW Wireless is a decent travel mouse. Thanks to its Bluetooth compatibility, you can easily connect it to your laptop without having to bring its cable or receiver around. However, the mouse is a bit bulky and might be hard to toss in a laptop case.

The Corsair IRONCLAW RGB Wireless is a good overall gaming mouse, but is mainly designed for people with large hands using a palm grip. It has excellent performance, but it's quite heavy and might be harder to play FPS games with. On the upside, Corsair mice are very well-built and this mouse has amazingly low click latency, whether you use it wired or wireless. See our recommendations for the best gaming mice, the best wireless gaming mice, and the best FPS mice. If you're interested in Corsair products, also check out the best Corsair mice.

The Corsair DARK CORE RGB PRO is better than the Corsair IRONCLAW RGB Wireless. The DARK CORE has lower click latency, a higher polling rate, and it has onboard memory. However, the IRONCLAW has more buttons, lower lift-off distance, and less CPI variation.

The Corsair IRONCLAW RGB Wireless and the Corsair Nightsword RGB are fairly similar, but the IRONCLAW doesn't need a cable to work. The Nightsword is ever so slightly lighter, but both mice have very similar performance.

The Corsair M65 RGB Elite is a better gaming mouse than the Corsair IRONCLAW RGB Wireless, although the M65 is wired while the IRONCLAW is wireless. The M65 is lighter and feels better-made thanks to its aluminum frame. On the other hand, the IRONCLAW Wireless is better suited for a palm grip, especially for people with larger hands.

The Logitech G903 LIGHTSPEED is a better gaming mouse than the Corsair IRONCLAW RGB Wireless. It's noticeably lighter and, when used wired, its cable feels better made and more lightweight. The Logitech also has an ambidextrous design, while the Corsair is for right-handed people with a strong slanted design. On the other hand, the Corsair can be used via Bluetooth as well as its receiver, which the Logitech can't do.

The Corsair IRONCLAW Wireless has a very gaming-oriented design. It has a lot of RGB lighting and a very aggressive style. The mouse looks very big and features a thumb rest on the left side, which is covered by a rubber coating. The mouse also has lots of buttons on top of its body. 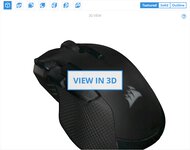 Although the Corsair IRONCLAW is wireless, it's quite bulky and doesn't even have an internal storing compartment for its receiver. The mouse is rather large and high, so you might not be able to toss it in a laptop bag. However, for people looking for a gaming mouse for their home setup, this won't matter. If you'd like a less bulky wireless mouse with receiver storage, check out the DELUX M800 Wireless.

The Corsair IRONCLAW RGB Wireless' build quality is great, but isn't quite on par with other Corsair mouse like the Corsair SCIMITAR PRO RGB. Only the front of the IRONCLAW is made out of metal, rather than having an aluminum frame. Instead, it's made out of solid plastic, which feels durable. The feet of this mouse are regular and slide decently well. There are also no loose parts.

The Corsair IRONCLAW Wireless RGB is very heavy and there are no optimization options. If you're interested in a similar wired gaming mouse with a set of added weights you can add to the inside of the palm area to change the overall weight and weight distribution, check out the MSI CLUTCH GM20 ELITE

The ergonomics are great. Due to its right-slanted design with a thumb rest on the left side, this is a very comfortable mouse to palm grip. However, some of the buttons might be a bit harder to reach depending on your hand size.

A palm grip is strongly recommended with this mouse, regardless of your hand size.

When using a claw grip, people with small and medium hands might have a bit of trouble reaching the mouse wheel and the front buttons.

Just like the claw grip, people with small and medium hands won't have the best control over the mouse with a fingertip grip and might have trouble reaching some buttons and the wheel.

The Corsair IRONCLAW Wireless has amazing wireless connectivity. It can be used both via Bluetooth or with its receiver. You can easily switch between modes with the switch on the underside of the mouse. It also turns itself off after being idle for a few minutes, or you can turn it off using the same switch.

The Corsair IRONCLAW RGB Wireless' cable is mediocre. Similar to Razer cables, it keeps kinks from the packaging and feels rather stiff. On the upside, when you're not using the cable to charge your mouse, you can use it as an extension to put your receiver closer to the mouse, for optimal performance.

This mouse has a lot of buttons on the left side of its body, making it sometimes awkward to use. All 10 buttons of the mouse are programmable, and it also has a profile switching button and a CPI switch button. The buttons are fairly easily to click and offer good feedback, but their positioning might be weird to use at first.

The Corsair IRONCLAW Wireless RGB's click latency is amazing when used wired or with its receiver, which is how we expect most people to use this mouse. On the upside, it can also be used via Bluetooth, but this isn't recommended for gaming as the click latency is noticeably higher.

The Corsair IRONCLAW Wireless has a mouse wheel that has fairly soft increments but still provide good feedback. Note that there are numerous reports online mentioning the low quality of the scroll wheel, which seems to be the weak point of the mouse and is usually to first part to break. If you're interested in a similar wireless gaming mouse with a scroll wheel that has L/R tilt inputs, check out the EVGA X20.

The Corsair iCUE software offers a lot of customization options on the IRONCLAW Wireless. Unfortunately, we weren't able to make the on-board memory work on various different computers, which is disappointing.

This mouse should be fully compatible with Windows and macOS, but we weren't able to customize it on macOS. Even when macros and settings were saved, the mouse would automatically revert to the default profile when used on a Mac.