Your browser is not supported or outdated so some features of the site might not be available.
Best
Gaming Mechanical Keyboards Wireless Mac iPad Programming Ergonomic Typing Budget Mechanical Quiet Logitech Cheap Razer RGB Gaming Under $100 Corsair Keychron Ducky
168
Keyboards store-bought and tested, supported by you via insider access, and when you purchase through links on our site, we may earn an affiliate commission. 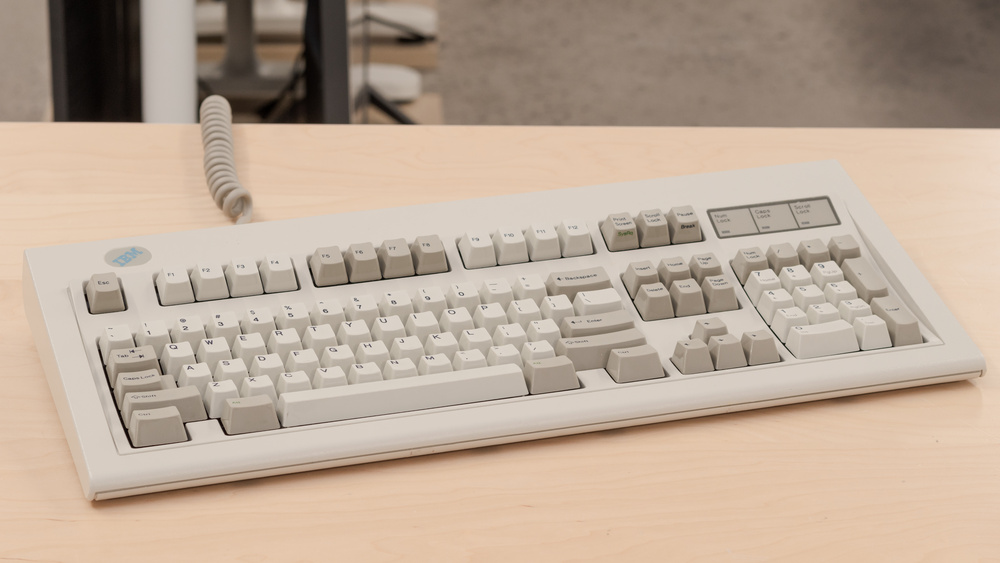 The IBM Model M was once an outstanding keyboard, but technology has greatly improved and modern keyboards offer more features, like RGB backlighting or programmable keys. This vintage keyboard still offers an outstanding typing experience with unique buckling spring switches. These are different from typical mechanical switches used on modern keyboards, but they're still considered mechanical because of the mechanism used to actuate the key. If you're feeling nostalgic and just need a basic typing keyboard, it gets the job done.

The IBM Model M isn't designed to be a gaming keyboard. There are no macro keys, no backlighting, and the keys have a high pre-travel distance.

The IBM Model M is a good office keyboard. The typing quality is outstanding, as the buckling spring switches offer a unique typing experience. Unfortunately, it does get loud, especially for an office environment. However, it has decent ergonomics and it's comfortable to type on.

The Model M is unremarkable for programming. It offers an outstanding typing experience and it's comfortable to type on. However, it doesn't have any macro keys or backlighting, and there's no dedicated software.

It's a fairly large keyboard that takes up a good amount of space on a desk, and it's also very heavy.

Amazing build quality. It's entirely made out of plastic but it's very solid and doesn't feel like it would break if dropped. The keycaps are two separate keycaps, as seen in the photo above, and you can replace the top one in case the lettering fades off. The keys are very stable, but the space bar has a bit of wobble to it.

Decent ergonomics. There's one incline setting and no wrist rest, but the entire shape of the keyboard is slightly sloped inwards, as seen in the photo above, making it comfortable to type on.

There's no backlighting on this keyboard.

The cable is coiled and when stretched out can reach over 11.8ft (3.6m). It's an SDL to PS/2 cable, so you will need a USB adapter if your computer doesn't have a PS/2 connector.

This keyboard can't be used wirelessly.

The Model M uses buckling spring switches, which have a clicky feel to them. They're slightly different from tactile mechanical switches since they don't have a bump before reaching the actuation point, but they still give tactile feedback.

Although these are technically different from typical mechanical switches used on modern keyboards, they're still considered mechanical. They use mechanical components to complete the circuit for actuation.

Outstanding typing quality. The buckling spring switches offer a unique typing experience with great feedback, and because the keys have good spacing and such high pre-travel distance, it helps reduce typos by quite a bit. It can get a bit tiring typing on it because of the high actuation force, but the profile of the keyboard helps reduce strain.

Due to the clicky switches, this keyboard is loud to type on and might bother people around you.

There's no dedicated software for this keyboard.

Considering this keyboard has basic keys and nothing extra, it has full compatibility on Windows and Linux. On macOS, Scroll Lock and Pause Break keys didn't work.

IBM produced many different variants of this keyboard throughout the years, with different keyboard layouts and colors, and each variant had a different Part Number (P/N). Our unit was P/N 1391401, which was manufactured in January 1993, and you can see the label here.

The Model M revolutionized keyboards with its layout and it set the tone for how keyboards would be designed throughout the years. However, modern keyboards also have many extra features, like backlighting, wireless connectivity, and media keys, so it's hard to compare this keyboard against those. In terms of typing quality, the Model M is still better than many keyboards today.

We also reviewed the IBM PS/2 Mouse, which doesn't compare well to modern mice and unlike the IBM keyboard, it can't really be used today. Also see our recommendations for the best keyboards, the best keyboards for writers, and the best ergonomic keyboards.

The Vortex Race 3 is much better than the IBM Model M. It has a better build quality, each key is macro programmable, and you can save up to four layers of customization directly to the keyboard's on-board memory. However, the Model M offers a better typing experience and it's more comfortable to type on.

The Dygma Raise is a much better keyboard than the IBM Model M. Comparing these two is proof of just how far technology has evolved. The Dygma is a split keyboard and you can customize every key with up to 10 layers of customization. It has individually-lit keys and there are LED lights underneath it that give it an underglow. The typing quality between the two keyboards is the same, but the Model M is full-sized, so it has more keys, such as a number pad.

The SteelSeries Apex Pro is much better than the IBM Model M. You can change the keys' pre-travel distance, it has customizable RGB lighting, all keys are macro programmable, and it has an included wrist rest. On the other hand, the IBM still has a much better typing experience.

The Corsair K95 RGB PLATINUM XT is significantly better than the IBM Model M. Each key is individually lit, all keys are macro programmable, and the comfortable wrist rest gives it better ergonomics. Meanwhile, the IBM has a better typing quality and it's fully compatible with Linux computers, while the Corsair is only partially compatible.