Driven by data, run by a passionate team of engineers, testers, technical writers, developers, and more.
We are hiring!
Cyber Monday deal: The LG 27GP83B-B has dropped by $50 on BestBuy.com. See all Monitor deals. 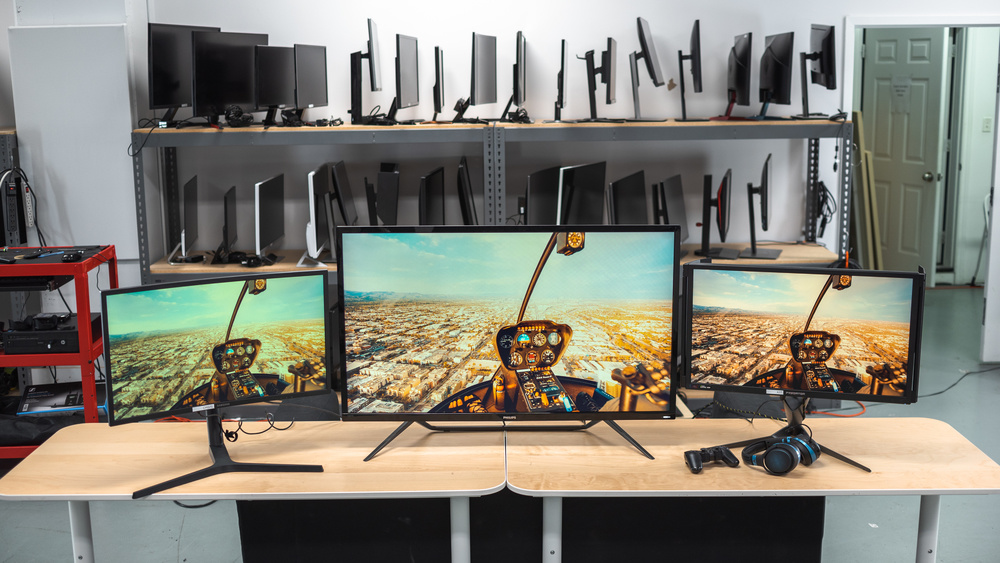 HDR is becoming more and more popular with home monitors, but not all monitors can display HDR equally well. So how do you know what to expect when buying a new monitor? The VESA DisplayHDR certification program is designed to help solve this issue. Developed by a joint team of more than two dozen monitor and electronics manufacturers, the DisplayHDR program will give you a rough idea of what to expect when buying a new monitor. This certification looks at a few different factors, including the peak brightness of the monitor, black levels, the color gamut it can display, and whether or not it has a local dimming feature. Although this certification program is mainly for monitors, you can also use it for laptops or tablets, but it's not currently designed for use for TVs.

Currently, the DisplayHDR certification is divided into two groups, with 5 certification levels for LCD monitors and 3 levels for OLED monitors. To be certified for a certain level, the display must pass all tests for that level, meaning some monitors could be brighter than the minimum specs for their certification, for example. You can see the full list of certified products, sorted by tier, here.

The participation trophy of HDR certifications, DisplayHDR 400 is the lowest level of HDR performance, and unfortunately, the vast majority of monitors on the market fall into this category. The 400 level features slightly higher peak brightness than most monitors can display in SDR, but doesn't require a wide color gamut, high contrast, or any local dimming feature. These monitors can't display bright highlights, and due to the generally low contrast, they can't display shadow details very well, or at all in some cases. Overall HDR performance of these monitors ranges from slightly better than SDR at best to washed out and muted at worst. It's usually not even worth enabling HDR on these monitors. If you care about HDR performance, avoid monitors that fall into this certification level.

The 500 level offers very similar performance to the 400 level, but it requires local dimming and slightly higher peak brightness. The difference between this level and the previous tier is very minor, despite the addition of local dimming. There are no standalone monitors available with this certification at this time; the only certified products are the Dell XPS 9310 and the Samsung Galaxy Book Pro 360 family, which are both laptops.

This is the first certification tier that starts to offer an okay HDR performance, especially for gaming. At almost twice the brightness that most monitors can reach in SDR, it's bright enough that bright highlights in some scenes can stand out, but it's not bright enough to deliver a true cinematic experience. These 600 level monitors must be capable of displaying at least 90% of the DCI P3 color space, whereas the 400 level only requires sRGB. Since DCI P3 is the most commonly used color space for current HDR content, this level of coverage is good enough that most monitors shouldn't show any signs of banding or tone mapped colors when displaying an HDR signal.

The 600 tier requires a local dimming feature. The maximum black level luminance is low enough that these monitors should have good dark scene performance. Unfortunately, due to limitations in the VESA group's current testing methodology (see below), not all monitors at this level will perform well in dark rooms. Local dimming requirements are very vague, and even a basic global dimming feature could pass this test, so this doesn't guarantee that these monitors will have a good contrast ratio.

Most monitors that perform at this level are about as good as it gets for monitors, and some of them rival high-end TVs for overall HDR performance. The much higher peak brightness of this tier results in a much better HDR experience; specular highlights stand out extremely well, and bright scenes look much closer to the content creator's intent. The color gamut requirements for this tier are unchanged from the 600 and 500 levels, but it requires lower black levels than the 600 tier, resulting in much better dark scene performance and better preserved shadow details.

Monitors in this tier are generally good enough for almost anything. They offer high enough peak brightness and generally good enough contrast for an incredible HDR gaming experience, and it's the first tier that delivers a good HDR movie experience. Depending on the exact performance, they can also be good for media creation, but it depends if the monitor can maintain high peak brightness levels for extended periods.

Currently, the 1400 tier is the highest certification offered by the VESA group, and there aren't many monitors on the market that support it. It requires very high sustained peak brightness levels, better contrast than the 1000 tier, and a wider color gamut than any previous tier. Monitors that meet these requirements offer an unrivaled HDR experience, better even than most TVs on the market, and they're good for almost anything you can throw at them.

The True Black certifications are basically the same as the DisplayHDR tiers, but as this certification is designed for OLED monitors, the local dimming and maximum black level luminance tests are very different. OLED monitors can dim individual pixels, so there's no traditional local dimming system (as there's no backlight), and the black levels are essentially 0 when displaying a black pixel. The overall experience with True Black is very different from the LCD tiers, though. Since OLEDs have essentially infinite contrast, HDR can look incredible, even with lower peak brightness levels. Due to their automatic brightness limiters, commercial OLED monitors aren't well-suited for content creation, as the monitor's brightness can fluctuate while you're using it. However, they deliver an impactful HDR experience when watching movies or gaming.

Unfortunately, the current test methodology for DisplayHDR, known as DisplayHDR CTS 1.1, has some serious limitations. Instead of using industry-standard test methods for things like contrast and local dimming, the VESA group has chosen to create their own test suite (available for free from the Microsoft Store). Although most of their tests reflect real-world usage, some of them, including their checkerboard test, are done in a way that even basic monitors with limited or even no local dimming can achieve easily. One example of this issue is with the Sceptre C345B-QUN168, which, as pointed out by Hardware Unboxed, can't display HDR content very well, despite being certified DisplayHDR 1000.

Due to these limitations in the testing methodology, the current testing standards for DisplayHDR are mainly helpful for brightness, as the contrast measurements and requirements are easily achievable by basic monitors with no local dimming. Since one of the main goals of HDR is to display bright and dark areas on screen at the same time, this is a significant limitation of the current test methodology, and their current contrast testing doesn't reflect real-world HDR usage. Because of this flawed test methodology, there are many IPS monitors with low contrast and basic, edge-lit local dimming features that are certified for the higher tiers of DisplayHDR, even though very few of them can deliver an impactful HDR experience.

Since manufacturers have to submit prerelease products to VESA for certification, they can cherry-pick the sample unit that gets sent. These samples could perform better than the final retail units, so a product certified for a certain tier possibly doesn't meet the specifications needed on the final retail units.

Unfortunately, there have been a few reports of some manufacturers using misleading advertising to make it seem like their products perform better than they should. Recently, a few monitors were listed on online shopping stores with a DisplayHDR 2000 logo, claiming to be certified by the VESA group as DisplayHDR 2000 certified, although no such certification currently exists. The VESA group is looking into these claims but has released a statement on their website confirming that no such certification program exists.

Although it's not perfect, the VESA DisplayHDR Certification provides potential buyers with a rough idea of what to expect when buying a new monitor. HDR support on monitors is still very limited, though, and the vast majority of monitors fall into the lowest level, which offers mediocre HDR performance at best. There are a few monitors that can deliver a decent HDR experience, though, especially if you're planning on using it for gaming instead of watching movies. In the end, it's important to look at the real performance of the display instead of only looking at the certifications. The VESA group's latest test methodology is from 2019, meaning as the monitor industry continues to improve, with new technologies like QD-OLED and IPS Black, they'll likely update their methodology to better reflect the current state of the industry. For now, it's a good place to start, even if it can't quite tell you the full story.