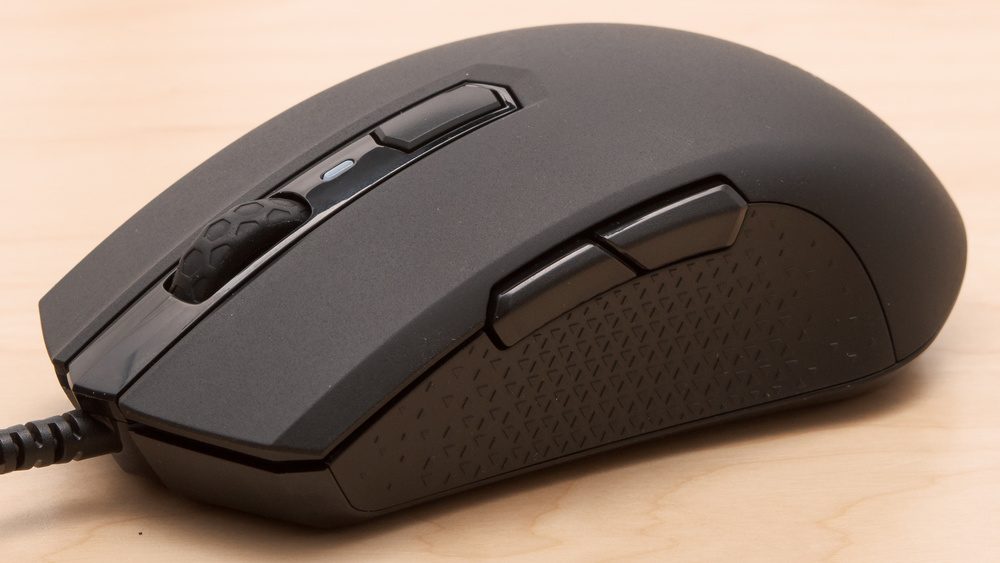 The Corsair M55 RGB Pro is a good gaming mouse that has an ambidextrous design and two sets of two side buttons. The mouse is rather long and large, which is better suited for people with larger hands. Its performance is good, although the sensor seems to behave differently depending on your mouse movement speed, which results in inconsistent sensitivity. On the upside, its click latency is very low and it's not too heavy if you can eliminate the weight of the wire.

This is a decent mouse for the office. Its ergonomics are good unless you prefer right-slanted or left-slanted mice. The mouse is well-built and has a few buttons to make work more fluid, but it has a wire that's stiff and can clutter up your desk.

Good for video games like FPS. The click latency is very low and feels responsive. The mouse is also fairly lightweight if you can eliminate the cable's weight. The mouse has a symmetrical design with two side buttons on each side, which gives you more inputs. It has a wide CPI range that's customizable, but its sensor consistency seemed a bit off during testing.

The Corsair M55 RGB Pro is good for MMO games. The two sets of side buttons on each side offer extra inputs, but it won't be as great as a dedicated side MMO panel with multiple buttons. On the upside, the mouse feels responsive and well-built, but there are way better MMO options available.

The Corsair M55 RGB Pro is a very good mouse for ultra-light gaming, although it's not designed for that purpose. The mouse is surprisingly light when you eliminate the weight of the cable, but it won't be as light as other mice specifically designed to be the lightest possible. It's a good alternative for people looking for a lightweight standard mouse that doesn't have a honeycomb pattern.

The Corsair M55 RGB Pro isn't designed as a travel mouse. This gaming mouse is rather bulky and always-wired. It will be hard to fit it in a laptop bag.

The Corsair M55 RGB Pro is a good gaming mouse, but unfortunately, its sensor seems to be a bit inconsistent, making it a worse choice than similar products with a better sensor. On the upside, the mouse is rather lightweight, without having an ultra-light honeycomb pattern. It also has two sets of side buttons, which is great, but might not be enough for MMO players. See our recommendations for the best gaming mice, the best wireless gaming mice, and our overall top picks for the best mice. If you're interested in Corsair products, also check out the best Corsair mice.

The Logitech G502 HERO is slightly better than the Corsair M55 RGB Pro. While it's heavier, the Logitech features more buttons and has an unlockable scroll wheel. It's better built and is also compatible with macOS. However, the Corsair might be a better option if you prefer a more straightforward design.

The Corsair M65 RGB Elite is a better mouse than the Corsair M55 RGB Pro. The M65 is better-built thanks to its aluminum frame, but it's a bit heavier as well. Its sensor is more consistent and doesn't seem to undershoot or overshoot depending on the mouse's movement speed. On the other hand, the M55 has two side buttons on each side, giving it a truly ambidextrous design, while the M65 only has side buttons on its left side.

The Razer DeathAdder Elite and the Corsair M55 RGB Pro are very similar mice, but the Razer has better overall performance due to the Corsair's inconsistent sensor sensitivity. The Razer's shape and size are also better suited for a wider variety of hand sizes and grips due to its right-slanted design. Its lift-off distance is also noticeably lower. On the other hand, the Corsair will be a better option if you want to use your mouse left-handed, and it has more inputs thanks to two side buttons on each side of the mouse.

The Logitech G MX518 Legendary is better than the Corsair M55 RGB Pro. The Logitech has more programmable buttons thanks to its G-Shift button, a wider and more precisely adjustable CPI range, and its sensor is much more consistent. However, the Corsair feels better built and has RGB lighting.

The Dell Alienware AW310M is a decent wireless gaming mouse, while the Corsair M55 RGB Pro is a great wired gaming mouse. The Corsair is lighter and has mouse feet that glide more smoothly. It also has two additional side buttons on the right and a lower click latency. Its customization software is compatible with Windows and macOS, while the Dell only has software for Windows. On the other hand, the Dell connects wirelessly with its USB receiver and uses an AA battery. It has a more consistent sensor and a lower lift-off distance. It also has a thumb and pinky rest, which the Corsair lacks.

The Corsair M55 RGB Pro is a fairly straightforward looking mouse. It has a symmetrical design with two side buttons on each side of the mouse. It also has RGB lighting on the manufacturer logo and can have solid colors set for the CPI settings. There are also rubber grips on both sides of the mouse. 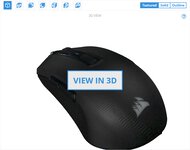 Like most wired gaming mice, the Corsair M55 RGB Pro isn't the most portable. It's rather bulky and might be hard to fit in a laptop case, but this won't matter for people who are looking for a gaming mouse for their home setup.

The Corsair M55 isn't too heavy, especially if you use a bungee to get rid of the weight of the cable. However, there's no weight optimization.

The Corsair M55 RGB Pro is a well-built mouse but isn't quite on par with some other Corsair mice we've reviewed so far. The whole body is made from solid plastic, but the rubber grips feel a bit cheap as they flex under moderate pressure. The clicks from all the buttons are easy to actuate and feel good. However, the increments of the scroll wheel are a bit soft and don't offer precision scrolling.

The ergonomics of this mouse are good. Its long and large body makes it comfortable for a wide variety of hand grips. This design is also fully ambidextrous thanks to the two side buttons on each side of the mouse. You can also invert the left and right-click buttons in the software. If you're interested in a wired gaming mouse with a similar weight and comparable performance but a right-handed shape, check out the Corsair HARPOON RGB PRO or the BenQ ZOWIE EC1-C.

People with small hands might have a bit of difficulty reaching the mouse wheel and the front side buttons.

Just like with a palm grip, the front side buttons and the scroll wheel might be a bit harder to reach for people with smaller hands.

The Corsair M55 RGB Pro's wide back makes it hard for people with small and medium hands to have nice control over the mouse with a fingertip grip.

The Corsair M55 RGB Pro's cable is fairly rigid and keeps a lot of kink from the packaging. It's quite similar to some Razer mice. If you want a similar mouse with a higher-quality cable, check out the Logitech G403 HERO.

The polling rate options are 125Hz, 250 Hz, 500Hz, and 1000Hz. It has a very wide CPI range, although its minimum CPI isn't as low as some other options. Unfortunately, it's minimum lift-off distance is very high. For a wired gaming mouse with a lower lift-off distance, check out the ROCCAT Kain 100 AIMO. If you want a more precisely adjustable CPI, check out the HyperX Pulsefire Surge.

You can easily program each of the Corsair M55's buttons in its software. It has a dedicated CPI switch button on top of the mouse, but you'll have to program a profile switching button in the software if you want it. If you'd like a G-Shift button that gives you a second layer of customization, check out the Logitech G MX518 Legendary. Or, if you'd rather a gaming mouse that has hot-swappable left and right-click buttons, check out the ASUS ROG Chakram Core.

The Corsair iCUE software allows you to customize the RGB lighting, the performance settings, and save different profiles for the mice. You can also disable either the left or right side buttons, or use all four. For a similar mouse with basic customization options for RGB lighting and CPI settings but without any companion software, check out the Cooler Master CM110.

Excellent compatibility. Since the software is available on Windows and macOS, you can customize the mouse's settings to your preference on both operating systems.