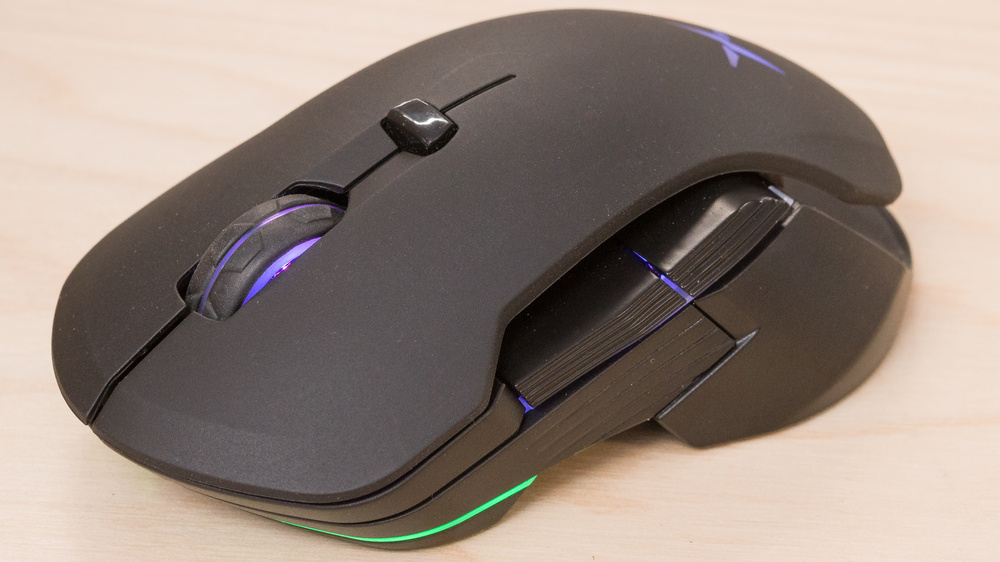 The DELUX M627 is a modular, ambidextrous gaming mouse with two buttons on each side. It comes with magnetically attachable finger rests for both sides, meaning you can change its ambidextrous design to a more ergonomic one for right or left hands. It's well-suited for all grip types and nearly all hand sizes, but extra-large hands may drape over the front of the mouse when using a palm grip. Performance-wise, it has a wide CPI range, a CPI you can adjust in increments of 100, and a low lift-off distance. You can cycle through five CPI profiles with the button below the scroll wheel, and the RGB lighting strip at the front of the mouse changes colors depending on the profile you're on. Unfortunately, its click latency is high, and some gamers may prefer a more responsive-feeling option.

The DELUX M627 is decent for office use. It feels well-built, and it comes with modular side wings, so you can use it as an ambidextrous mouse or attach the magnetic finger rests on either side to give an ergonomic right- or left-handed shape. Unfortunately, it doesn't support Bluetooth, and you can't pair it with multiple devices at once. Also, its scroll wheel doesn't have L/R tilt buttons or a free-scrolling feature.

The DELUX M627 is okay for FPS gaming, but it has high click latency, so it may not feel responsive enough for gaming, and it's heavy. Also, its mouse feet don't glide very smoothly, and its braided cable isn't very flexible. On the bright side, it has a comfortable, ambidextrous design, and it comes with magnetic finger rests that convert it into a right- or left-handed mouse. It has a wide CPI range and a low lift-off distance, although it isn't as low as other options.

The DELUX M627 is decent for MMO gaming, but it doesn't have nearly as many mice as dedicated MMO mice do. That said, you can reprogram all the buttons it does have using the dedicated software. It feels well-built and comfortable, and it's suitable for all grip types, although people with extra-large hands may struggle with a palm grip. It has a wide CPI range, a CPI you can adjust in increments of 100, and a low lift-off distance; however, its click latency is high, which isn't ideal for fast-paced games.

The DELUX M627 is a mediocre ultra-light gaming mouse since it's significantly heavier than most dedicated ultra-light gaming mice that we've tested. Also, its braided cable isn't very flexible, and its mouse feet have many sharp edges that cause a scratching sound on desks. Also, the click latency is high for a gaming mouse, so some gamers may prefer a more responsive-feeling option.

The DELUX M627 is decent for travel. You can use it wirelessly via its USB receiver, and you can store the receiver in the mouse when not in use. It feels well-built, and it should fit in most laptop bags, but it's much bulkier if you attach the finger rests. Unfortunately, it doesn't support Bluetooth, and the right side buttons don't work on macOS.

The DELUX M627 is an okay wireless gaming mouse. It's one of the few gaming mice we've tested with modular parts, which let you swap out the sides to turn it into an ambidextrous, right-handed, or left-handed mouse. It's an interesting option if you want to customize the feel and shape. Unfortunately, it has a fairly high latency, which may not feel responsive enough to some gamers, and while its lift-off distance is low, it isn't as good as some other options at its price point.

The DELUX M800 Wireless and the DELUX M627 are both wireless gaming mice. The M800 is an ambidextrous mouse with two buttons on its left side. It's significantly lighter, and it has a much more flexible cable. On the other hand, the M627 also has an ambidextrous shape, but it has two buttons on each side of the mouse. Also, it comes with magnetic thumb rests that you can attach to either side to give it a more ergonomic shape for either left or right hands. Performance-wise, they both have fairly high click latency, but the M800's sensor is more inconsistent.

The Razer Viper Ultimate and the DELUX M627 are both wireless gaming mice, but the Razer performs much better. The Razer has a much lighter weight and better quality mouse feet, and you can set a HyperShift button to give you a second layer of custom commands. Also, it has a more precisely adjustable CPI, a lower lift-off distance, and much lower click latency. On the other hand, the DELUX has a modular design and comes with magnetic thumb rests to make the mouse left- or right-handed.

The Logitech G502 HERO is a good wired gaming mouse, while the DELUX M627 is an okay wireless gaming model. Overall, the Logitech performs better, thanks to its lower lift-off distance, more precisely adjustable CPI, and lower click latency. Also, it has more programmable buttons and a G-Shift feature that gives you a second layer of customization. Its scroll wheel has L/R tilt buttons and can unlock for free scrolling, which is great if you intend to use it for office work. On the other hand, the DELUX has a modular design and comes with magnetic thumb rests to make the mouse left- or right-handed.

The Razer Viper Mini is an excellent wired gaming mouse, while the DELUX M627 is an okay wireless gaming model. The Razer is much lighter, and its mouse feet are better quality and glide much more smoothly. While it has fewer buttons than the DELUX, the Razer can have a HyperShift button, which gives you a second layer of controls. Also, it has exceptionally low click latency. On the other hand, the DELUX has a modular design and comes with magnetic thumb rests to make the mouse left- or right-handed. It's better suited for medium to extra-large hands using a palm or claw grip than the Razer is.

The GLORIOUS Model D is a wired ultra-light gaming mouse, while the DELUX M627 is a wireless gaming mouse. The GLORIOUS is significantly lighter, and it has a more flexible cable and smoother-gliding mouse feet. Also, its click latency is much lower, so it feels more responsive for gaming. On the other hand, the DELUX comes with magnetic thumb rests that you can add on either side of the mouse to make it right-handed or left-handed. Also, it has a wider CPI range and a pair of buttons on each side.

The DELUX M625 is a good, right-handed wired gaming mouse, while the DELUX M627 is an okay ambidextrous wireless gaming mouse. The M625 is marginally lighter and feels sturdier. It also has a somewhat more flexible cable and a higher maximum CPI range. On the other hand, the M627 connects wirelessly with its USB receiver and has a rechargeable battery. It has a lower minimum CPI and includes magnetic finger rests for transforming the mouse into a right or left-handed configuration. The two mice have the same click latency over a wired connection, but the M627 has a higher click latency when used wirelessly. 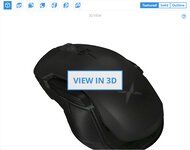 For a similar wireless gaming mouse with modular pieces that you can install to transform the mouse between a right or left-handed configuration, check out the HP OMEN Photon.

When the battery is low, all the lighting zones, except for the CPI strip at the front of the mouse, flash red.

The polling rate options available on the DELUX M627 are 125Hz, 250Hz, 500Hz, and 1000Hz. The sensor is a bit inconsistent, and it tends to overshoot the set CPI during slow movements more than during fast ones.

If you're interested in a similar ambidextrous gaming mouse with better click latency, check out the Dell Alienware AW310M.

The right side buttons don't work by default in macOS, and you can't remap any of the buttons since there's no software available on this OS.