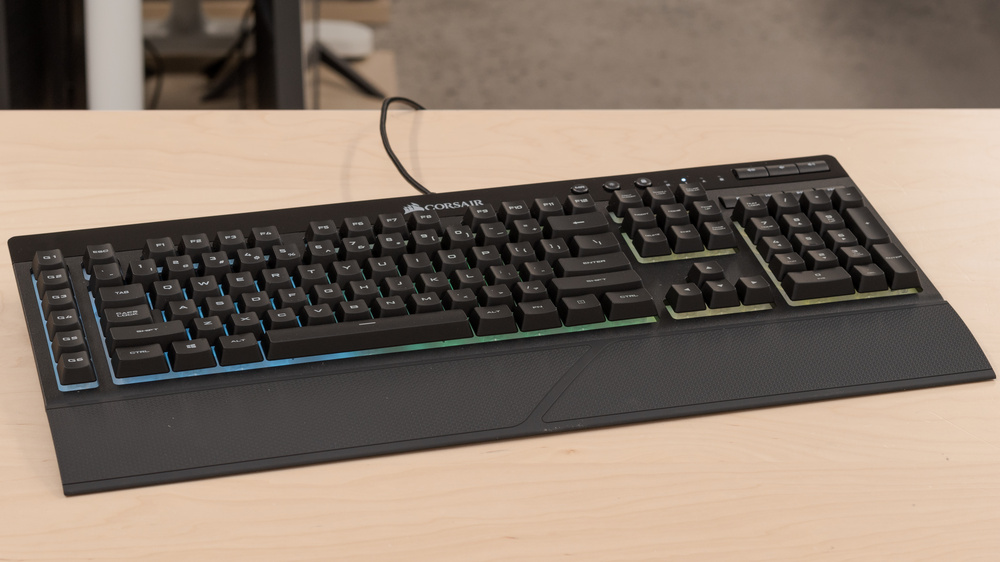 The Corsair K55 RGB is a decent full-sized gaming keyboard that uses rubber dome switches, which don't offer the same tactile feedback as mechanical switches found on most gaming keyboards. It has six extra macro keys, and since each key is macro programmable, you can customize it to your liking. The keys are stable, but they feel heavy to type on, and you may experience fatigue when typing for long periods. It has zone-lit RGB backlighting if you want to use it in the dark, but you can't change the lighting on a per-key basis. It should be fine enough for casual gamers, but it might disappoint some more serious or competitive gamers.

The Corsair K55 is only decent for gaming as its rubber dome switches require a fair amount of force to operate, resulting in less responsive-feeling keys. On the other hand, it has very low latency, zone-lit RGB lighting, six dedicated macro keys, and all of its keys are programmable.

The Corsair K55 is only a decent keyboard for office use. The keys feel heavy to type on and could get tiring, but they feel stable, and there's decent space between each one which helps reduce typos. The Corsair K55 has good ergonomics and comes with a comfortable wrist rest. It's also quiet to type on, which is great for an office environment.

The Corsair K55 is passable for programming use. Each key is macro-programmable, and it has zone-lit backlighting, but the typing quality is mediocre, and you may experience fatigue when typing for long periods as the keys require a fair amount of force to operate. That said, it has good ergonomics and comes with a comfortable wrist rest.

The Corsair K55 is bad for entertainment or home theatre PC use. It's a full-sized keyboard that takes up a considerable amount of space, especially with the wrist rest attached, and it can't be used wirelessly. Thankfully, it does have media keys, but while it does have backlighting, it's zone-lit only. It also lacks a trackpad, so you'll need a dedicated mouse to move your cursor.

The Corsair K55 RGB is only available in black with rubber dome switches. The Corsair K57 RGB WIRELESS is a wireless version of the Corsair K55 with individually-lit keys. If you come across a different variant of the K55, or if yours doesn't correspond to our review, let us know, and we'll update the review.

The Corsair K55 is an entry-level gaming keyboard that doesn't compare very well with higher-end mechanical gaming keyboards. That said, it may be a good choice if you're a casual gamer, and it performs similarly to some of its competitors, including the Razer Cynosa Chroma and the SteelSeries Apex 3. For more options, check out our recommendations for the best keyboards, the best gaming keyboards, and the best RGB keyboards.

The SteelSeries Apex 3 and the Corsair K55 RGB are both full-sized gaming keyboards with rubber dome switches. The SteelSeries has a sturdier-feeling build quality and keystrokes that require less operating force. The Corsair has substantially lower latency, and though its keystrokes require a higher operating force, they also have better tactile feedback, although that can tire your fingers more quickly.

The Corsair K55 RGB and the Corsair K57 RGB WIRELESS are two very similar keyboards with rubber dome switches. The only differences between them are that the K57 is wireless and has individually-lit keys, while the K55 is wired and has zone lighting.

The Corsair K55 RGB and the Razer Cynosa V2 are both full-sized keyboards with rubber dome switches. The Razer has individually-lit RGB backlighting, and its keys require much lower operation force, making its keystrokes feel lighter. The Corsair only has zone backlighting, but it has significantly lower latency, a detachable wrist rest, and companion software compatible with macOS.

The Corsair K68 RGB is much better than the Corsair K55 RGB. It uses mechanical switches, providing better tactile feedback for an improved gaming experience and better typing quality. Each key on the K68 is individually lit, while the K55 is zone lit. That said, since the K55 uses rubber dome switches, it's quieter to use in office environments.

The Corsair K55 RGB and the Razer Cynosa Chroma are both full-sized gaming keyboards that have rubber dome switches and keystrokes with very similar pre-travel distances. The Corsair has a detachable wrist rest for better ergonomics, while the Razer has individually-lit keys.

The Corsair K55 RGB and the HyperX Alloy Core RGB are both non-mechanical gaming keyboards with rubber dome switches and similar typing qualities. That said, the Corsair has is a better overall keyboard with several additional features, including a wrist rest for better ergonomics, macro programmable keys, and companion software for customization.

The Corsair K55 RGB and the SteelSeries Apex 3 TKL are two decent gaming keyboards with rubber dome switches. While the Corsair has much lower latency for a more responsive gaming experience, the keys on the SteelSeries feel lighter to press and offer decent typing quality. They're similar in terms of gaming features, but the Corsair also comes with a wrist rest, which the SteelSeries doesn't, and it's bigger as it has a numpad.

The Logitech G910 Orion Spark is better than the Corsair K55 RGB for most uses, and the Logitech's Romer-G switches provide a much better typing experience than the rubber dome switches on the Corsair. The keys on the Logitech are also individually-lit rather than zone-lit, but the Corsair comes with a detachable wrist rest for added ergonomics, and its companion software offers a cloud sync option the Logitech lacks.

As a full-sized keyboard, it takes up a fair amount of desk space, but you can remove the wrist rest if you'd prefer it to take up less space.

The build quality is only adequate and feels very similar to the Corsair K68 RGB. It's made entirely of plastic and has a decent amount of flex, but it still feels sturdy, and there are no obvious gaps. The keycaps are ABS with laser-etched legends, and though they feel mushy when typing, they're very stable.

This keyboard has good ergonomics. There's one incline setting, and it comes with a detachable wrist rest.

This keyboard has disappointing backlighting. Unlike the Corsair K68 RGB, it has a zone-lit backlight, and you can't customize the RGB lighting on each key. You can change the brightness settings between 'Off', 'Low', 'Medium', and 'High' directly on the keyboard itself. If you want a keyboard with individually-lit keys and more customization options, check out the Razer Cynosa Chroma.

It comes with a long cable, so you shouldn't have any issues reaching your computer.

This keyboard has quite a few extra features. All keys are macro-programmable, excluding the Windows key lock, which can only be programmed to do one of four functions. There are also six dedicated macro keys on the left side.

Unlike the mechanical switches on the Corsair K68 RGB, this keyboard has rubber dome switches that feel a bit mushy. They require a very substantial amount of force to operate, and they have a very noticeable tactile bump to overcome before the actuation point.

The Corsair K55 has mediocre typing quality, and the keys feel soft and mushy. They also require a significant amount of force to operate, so you may experience fatigue when typing for long periods. Fortunately, the keys are fairly stable, and there's a good amount of space between them that may help you reduce typos. If you're looking for a gaming keyboard with much better typing quality, then check out the SteelSeries Apex 7 TKL.

As is the case with most rubber dome switches, the Corsair K55 RGB Gaming Keyboard is very quiet and shouldn't bother people around you.

This keyboard has remarkable latency. Even most competitive gamers are unlikely to notice any delays.

The Corsair iCue software offers a good amount of customization options for this keyboard. Each key is macro-programmable, and you can change the RGB zone lighting through the software. Corsair claims this keyboard has on-board memory, but it didn't work for us.

The Corsair K55 has decent compatibility. It's only fully compatible with Windows, and with macOS, the Scroll Lock and Pause Break buttons don't work. On Linux, everything works except for the media keys. If you need a similar keyboard that's fully compatible with Linux, check out the HyperX Alloy Core RGB.