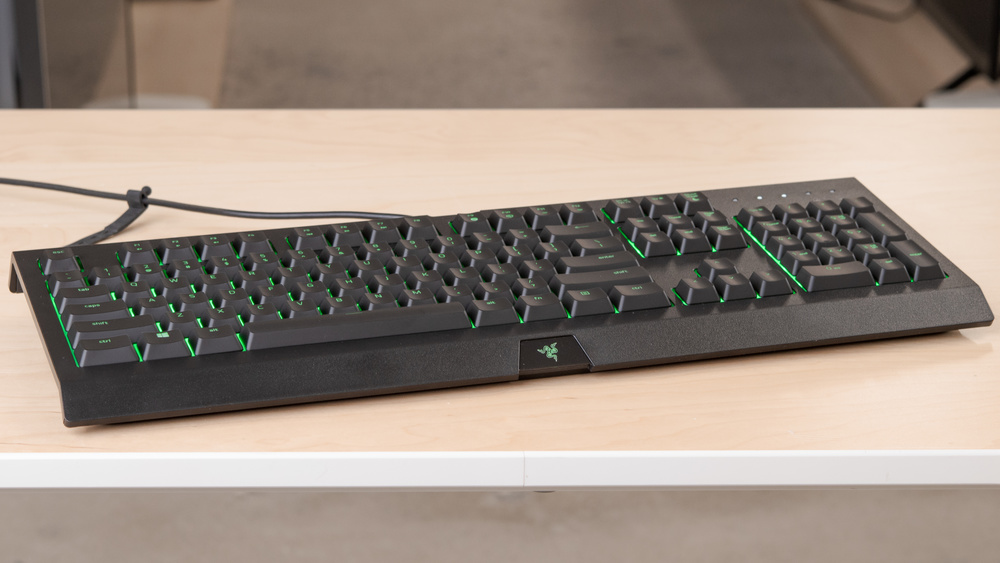 The Razer Cynosa Chroma is a decent gaming keyboard with full RGB backlighting and programmable keys. Its rubber dome switches feel light to type on, but may be too mushy for those who prefer mechanical switches. While Razer's Synapse 3 software has a good amount of customization options, it can be unstable at times and the keyboard doesn't have on-board memory to save profiles. Overall, although there are a few gamer-oriented features, the keyboard is fairly basic, and the typing experience is hard to differentiate from your average, run-of-the-mill office keyboard.

The Razer Cynosa Chroma is decent for gaming. Although the rubber dome switches feel mushy and aren't as responsive, every key on the keyboard can be set to a different function or a macro with the Synapse 3 software. Unfortunately, it lacks dedicated macro keys for MMO games, but the full RGB backlighting is great for those who like to game in a dark room or to highlight important keys.

The Razer Cynosa Chroma has no wireless capabilities and can't be used with mobile devices.

The Razer Cynosa Chroma is mediocre for office use. The keyboard is fairly easy to type on and doesn't make a lot of noise, but the mushy feeling of the rubber dome switches and high actuation point can cause a bit of fatigue over time. Sadly, it doesn't come with a wrist rest and compatibility with Linux and macOS is limited, as the Synapse 3 software is only available for Windows.

The Razer Cynosa Chroma is okay for programming. It provides a fairly light typing experience, but the high actuation point can be tiring and feel less responsive overall. Although it lacks dedicated macro keys, every key on the keyboard can be reprogrammed. The full RGB backlighting is a nice addition for those who code in the dark, but Linux and macOS users won't be able to customize it in any way.

The Razer Cynosa Chroma doesn't have any variant; however, there's a Pro version that is nearly identical but with RGB underglow lighting beneath the keyboard.

The Razer Cynosa V2 is a slightly better keyboard than the original Razer Cynosa Chroma. The V2 has dedicated media keys, but that aside, offers a near-identical experience.

The Razer Ornata Chroma is better than the Razer Cynosa Chroma. It features switches that are a mix of membrane and mechanical switches, while the Cynosa simply uses mushy rubber dome switches. The Ornata is better built and comes with a magnetic wrist rest, which makes its ergonomics and overall typing experience much more comfortable.

The Corsair K55 RGB and the Razer Cynosa Chroma are both full-sized gaming keyboards that have rubber dome switches and keystrokes with very similar pre-travel distances. The Corsair has a detachable wrist rest for better ergonomics, while the Razer has individually-lit keys.

The Razer Ornata V2 is a better keyboard than the Razer Cynosa Chroma if you want to try mechanical keyboards. The Ornata V2 isn't really a mechanical keyboard, but it has hybrid mecha-membrane switches that have the softness of rubber dome switches and clicky feedback from mechanical ones. It also comes with a nice wrist rest and feels higher-end than the Cynosa Chroma. The V2 also has dedicated media keys and is more comfortable to type on. On the other hand, if you don't like clicky switches, the Cynosa Chroma is much quieter.

The Razer Cynosa Chroma and the HyperX Alloy Core RGB are similar keyboards in most uses, as they're both budget membrane keyboards with RGB backlighting. The only real difference is that the Razer has more customization options due to its software support, and the HyperX has dedicated media keys instead of hotkeys.

The EVGA Z12 and the Razer Cynosa Chroma are both very good gaming keyboards with non-mechanical switches. The rubber dome switches on the EVGA are lighter to press and have a shorter pre-travel distance for a more responsive gaming experience. Typing also feels better on the EVGA as it has better ergonomics. On the other hand, the Razer has individually-lit keys, while the EVGA is limited to zone backlighting.

The Corsair K57 RGB WIRELESS is better than the Razer Cynosa Chroma. Both use rubber dome switches and have full RGB backlighting, but the Corsair is wireless, has dedicated macro keys, and comes with a wrist rest, while the keys on the Razer are a bit lighter to press.

The Razer Cynosa Chroma gaming keyboard is fairly large, as it's a full-size keyboard. It doesn't come in a TKL (tenkeyless) variant.

The Cynosa Chroma's build quality is passable. The keyboard is made entirely out of hard plastic, but it exhibits some flex. The doubleshot ABS keycaps feel smooth and shouldn't have any issues with key legends fading or chipping over time. The keys are stable, but the spacebar does rattle a bit. If you want a similar keyboard with a better build quality, check out the HyperX Alloy Core RGB.

The keyboard's ergonomics are mediocre. There are two incline settings; however, it doesn't come with a wrist rest. If you prefer a keyboard with a wrist rest, then check out the Corsair K55 RGB or the very similar Razer Ornata Chroma.

This keyboard has full RGB backlighting and it can be customized on a per-key level via Razer's Synapse 3 software. It's good for those who like to game in the dark or want to highlight important keys.

The Cynosa Chroma is a wired-only keyboard.

The Cynosa has hotkeys for media control, backlight brightness, and 'Gaming mode', which locks the Windows key to prevent accidentally minimizing your game. You can also customize the keys you wish to lock with the Synapse 3 software. If you prefer having dedicated media controls, the SteelSeries Apex 3 is a good alternative, or if you want dedicated macro keys, look into the Corsair K57 RGB WIRELESS.

The Razer Cynosa Chroma uses rubber dome switches that don't require a lot of force to actuate, however, the tactile bump feels quite heavy. Furthermore, the pre-travel distance is higher than most mechanical keyboards, requiring more distance before a keystroke is registered. This can lead to better typing accuracy, but can also feel less responsive, especially for gaming. If you want to venture in the mechanical keyboard world but aren't quite sure yet, check out the Razer Ornata V2 with its hybrid mecha-membrane switches.

The typing experience on this keyboard is mediocre. Although the keys are easy to press due to the low actuation force, the rubber dome switches have a fairly heavy tactile bump, and the keys feel rather mushy and not as responsive, which can cause fatigue when typing for a long time. The keys are mostly stable, except for the spacebar having a slight rattle. Overall, it doesn't feel any different from the average office keyboard.

Typing noise on this keyboard is quiet, but can be quieter for those who don't bottom out the keys. However, the spacebar has a slight rattle to it. Overall, it's quiet enough to be used in an office without being bothersome.

The Razer Cynosa Chroma has good software support. The Synapse 3 software lets you customize the backlight of each key individually and every key can be programmed or remapped to a different function. The keyboard doesn't have on-board memory, so all profiles and macros are saved within the software. This makes moving the keyboard to another computer somewhat inconvenient, but there's a cloud sync option available, though it requires an account. Unfortunately, we had some issues getting Synapse 3 working, as it's currently in Beta, but we were able to resolve the issue with a quick computer restart. If you need a keyboard that has software support for macOS, check out the Logitech G213 Prodigy.

This keyboard has decent compatibility. It works with all desktop operating systems; however, Synapse 3 is only available on Windows, so Linux and macOS users won't be able to customize the keyboard. Additionally, while all keys function on Linux, Scroll Lock and Pause don't work on macOS.