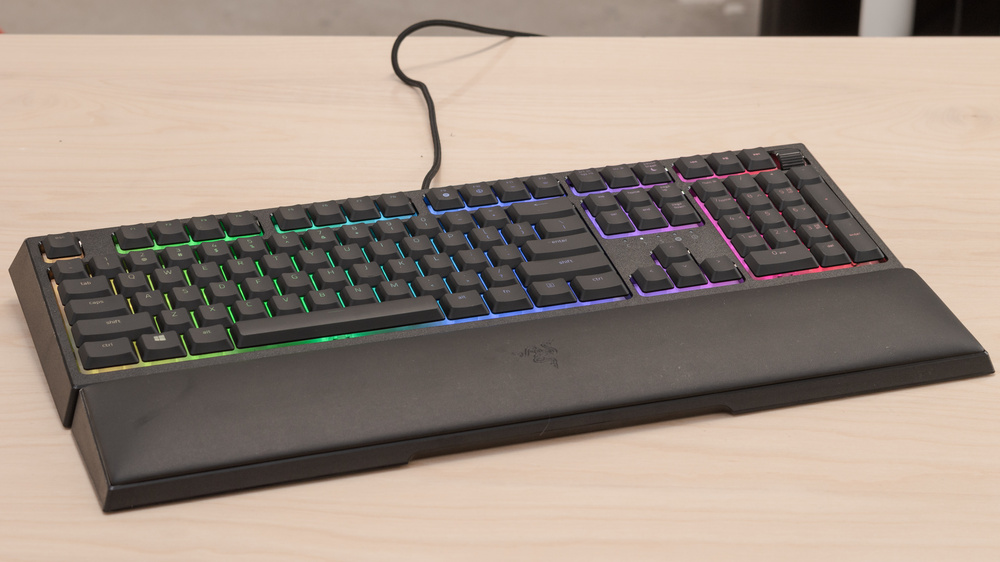 The Razer Ornata V2 is a great full-sized gaming keyboard. It's the replacement of the Razer Ornata Chroma and comes with the same Razer Hybrid Mecha-Membrane switches. These are considered a hybrid between mechanical and rubber dome switches; they offer the same tactile feedback as a mechanical switch, but like some rubber dome switches, they require a bit of force to actuate. Other than that, the keyboard is fairly well-built, features full RGB lighting, and has dedicated media keys, including a wheel for volume control. You can also set macros to any key through the Razer Synapse 3 software, which is unfortunately available on Windows only.

The Razer Ornata V2 is a great gaming keyboard. It has unique Razer Hybrid Mecha-Membrane switches that mix the softness of rubber domes and the clickiness of mechanical switches. Unfortunately, they require a bit more force to actuate than most mechanical switches. The keyboard features nice RGB lighting and comes with a fairly comfortable wrist rest.

The Razer Ornata V2 is a wired-only keyboard and isn't designed to be used with mobile devices.

The Razer Ornata V2 is a good keyboard for the office. It has good ergonomics with two incline settings, and it comes with a wrist rest. It offers good overall typing quality, although it can be a bit noisy due to its clicky switches, which might not be ideal if you're near colleagues. The keys can also feel a bit heavy to press at times, but it isn't too bad.

The Razer Ornata V2 is a good keyboard for programming. It offers good typing quality with its Hybrid Mecha-Membrane switches, and its ergonomics are good thanks to its two incline settings and wrist rest. You can program macros on all its keys, but unfortunately, it doesn't allow multi-device pairing since it's wired-only.

The Razer Ornata V2 is poor to use as an HTPC keyboard. It's wired-only, so you have to connect it directly to your TV. It also lacks a trackpad, so you need a mouse to navigate the on-screen interface. On the plus side, it has full RGB lighting, making it easy to see the keys in the dark.

We tested the Razer Ornata V2 in black, and it's the only available in this variant. If you have an Ornata V2 that's different from ours, let us know.

The Razer Ornata V2 is a small upgrade over the previous Razer Ornata Chroma but still uses Razer Hybrid Mecha-Membrane switches. They have low pre-travel distance but can feel a bit heavy to actuate at times and are clicky. Also see our recommendations for the best mechanical keyboards, the best Razer keyboards, and the best gaming keyboards.

The Razer Ornata V2 is an upgraded Razer Ornata Chroma. It now has dedicated media keys with a volume wheel. Other than that, the hybrid switches still feel fairly similar and you still get full RGB backlighting with individually-lit keys. These two boards offer nearly identical features, but if you prefer having dedicated media keys, the V2 is the better option.

The Razer Ornata V2 and the Razer Cynosa V2 are fairly similar gaming-wise. The Ornata V2 has slightly lower latency, and it provides a better typing experience as its Mecha-Membrane switches don't feel as mushy as the rubber dome switches on the Cynosa V2. They both have two incline settings, but the Ornata V2 includes a detachable wrist rest.

The Razer Ornata V3 is the successor to the Razer Ornata V2. However, the V3 offers fewer features than the V2. For example, the V2 comes with a plushy wrist rest, while the V3 has a fairly stiff plastic one with soft touch coating. The V2 has full RGB backlighting that's customizable on a per-key basis, while the V3 only has ten RGB zones. Otherwise, the two keyboards perform fairly similarly, so it depends on your personal preference of what extra features you value.

The Razer Huntsman and the Razer Ornata V2 are very different keyboards. The Huntsman uses mechanical switches. while the V2 uses hybrid switches that feel more like rubber domes. The Huntsman's switches have a much shorter pre-travel distance and lower operating force, so they lighter and more responsive. The V2 has a wrist rest and dedicated media keys, but it lacks onboard memory, which the Huntsman has. The V2's latency is a bit higher, but it shouldn't be noticeable for most people.

The Razer Ornata V3 X is the updated version of the Razer Ornata V2. However, as the V3 X is a budget version of the Ornata lineup, it lacks a few of the features found on the V2, like RGB backlighting that's customizable on a per-key basis and dedicated media keys. Instead, the V3 X has a single RGB zone, media hotkeys, and a hard plastic wrist rest rather than a plushy one.

The Razer BlackWidow Elite is a much better keyboard than the Razer Ornata V2. The Elite features mechanical switches from Razer, which have very low pre-travel, making it great for gaming. On the other side, the V2 features non-mechanical Mecha-Membrane switches, which may feel a bit heavy to press. The Elite is also much better-built and feels a lot more durable than the plasticky V2.

The Razer Ornata V2 and the Corsair K55 RGB PRO are full-sized, wired keyboards, but the Razer is a slightly better gaming keyboard. The Razer has full RGB backlighting with individually-lit keys, one additional incline setting, and a volume wheel. It also has clicky Razer Mecha-Membrane switches and provides good typing quality, but its software isn't compatible with macOS. On the other hand, the Corsair has significantly better latency and onboard memory for customization profiles. It has tactile rubber dome switches and provides an okay typing quality.

The Razer Ornata V2 is a better keyboard than the Razer Cynosa Chroma if you want to try mechanical keyboards. The Ornata V2 isn't really a mechanical keyboard, but it has hybrid mecha-membrane switches that have the softness of rubber dome switches and clicky feedback from mechanical ones. It also comes with a nice wrist rest and feels higher-end than the Cynosa Chroma. The V2 also has dedicated media keys and is more comfortable to type on. On the other hand, if you don't like clicky switches, the Cynosa Chroma is much quieter.

The Razer Ornata V2 and the ROCCAT Magma are similar non-mechanical gaming keyboards. If having a lower latency matters a lot to you, the ROCCAT is a better option. Also, the ROCCAT Magma has a semi-transparent plastic base plate that lets a lot of light through, but you can only control it in five zones. It uses rubber dome switches that are very quiet but require some force to actuate. On the other hand, the Razer may be a better choice if you value dedicated media keys, a volume control wheel, and having more macro-programmable keys. It uses proprietary Mecha-Membrane switches designed to mimic the feeling and feedback of a clicky switch.

The build quality of this keyboard is decent, and there's not much improvement from the previous Razer Ornata Chroma. The frame is still plastic and has a lot of flex, and you may even notice the chassis bend with hard key presses. The low-profile ABS keycaps feel nice to touch, and the keys are stable with no noticeable wobble. There are rubber feet underneath the keyboard, but they don't work very well as you can easily slide the keyboard around during use.

The ergonomics of this keyboard are good. It comes with a detachable wrist rest, which is fairly plushy and comfortable, and there are two incline settings, compared to the single one available on the Razer Ornata Chroma. The faux leather wrist rest attaches to the keyboard magnetically, and it feels very comfortable.

The Razer Ornata V2 has amazing RGB backlighting. You can easily customize it with the software on a per-key basis and set different effects. You can also control the brightness directly on the board, which is nice.

The keyboard's cable is long enough to reach your computer, but it's unfortunately not detachable.

This keyboard is wired-only and can't be used wirelessly.

The extra features available on the Razer Ornata V2 are what make it stand out when put against the previous Razer Ornata Chroma. It now has dedicated media keys and a dedicated wheel for volume. Like the Chroma, you can also enable Game Mode to lock the Windows key with Fn+F10. Every key is macro-programmable, and there's also a Hypershift key that allows you to access a second layer of functions and keys. It doesn't have extra macro keys, and if you prefer that look into the EVGA Z12.

The typing quality is quite good. The switches offer a nice mix of smoothness of rubber dome switches with the clicky feedback of mechanical switches. Unfortunately, the spacebar feels very wobbly and rattly. The keycaps don't feel too bad for ABS plastic, although they don't feel as nice as PBT keycaps.

This keyboard has good latency. It's not as low as some other gaming keyboards, like the Razer BlackWidow Elite, or the EVGA Z20, but most people shouldn't notice any delay.

Just like most Razer products, this keyboard is compatible with Razer Synapse 3. It features a lot of customization options, whether it's key-remapping or RGB lighting. You can create a lot of different profiles, but unfortunately, it doesn't have onboard memory.

While the software is available on Windows, making the keyboard fully compatible and customizable on this operating system, it's not available on macOS or Linux, which is unfortunate. Also, some keys like the context menu don't work on macOS.