Your browser is not supported or outdated so some features of the site might not be available.
Best
Gaming Mechanical Wireless Keyboards Mac iPad Ergonomic Typing Programming Budget Mechanical Quiet Cheap Logitech Razer Gaming Under $100 RGB Corsair Keychron Ducky
166
Keyboards store-bought and tested, supported by you via insider access, and when you purchase through links on our site, we may earn an affiliate commission. 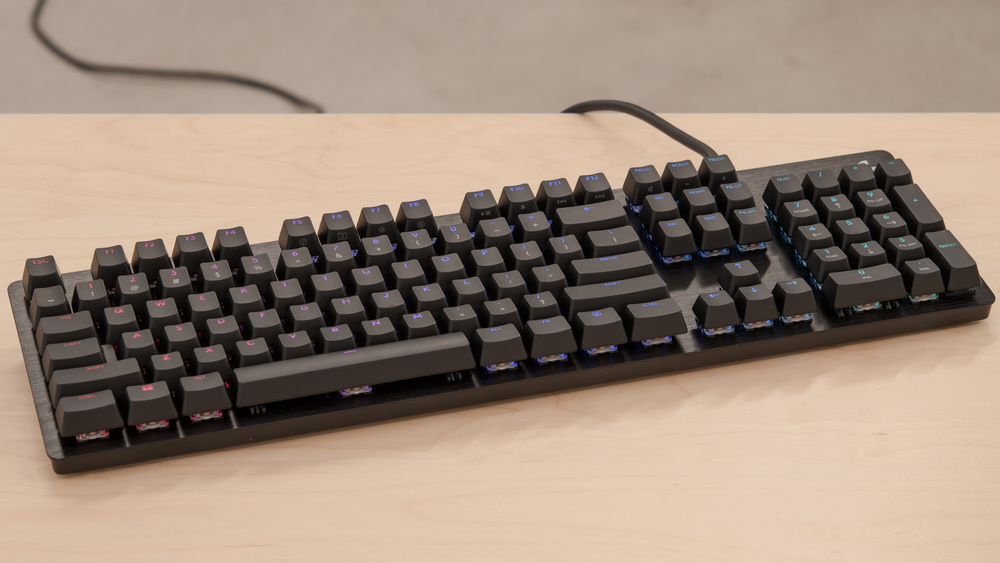 The Logitech G512 Special Edition is an excellent mechanical gaming keyboard that features proprietary switches that are similar to Cherry MX Blues. These clicky switches provide a satisfying and light typing experience, but they can be too loud for quiet office environments. Logitech's G HUB software has tons of customization options to suit your needs; however, the lack of onboard memory is a bit disappointing, as the software is required to export profiles to a different computer. Although most of the features offered are fairly common among mechanical gaming keyboards, enthusiasts of clicky switches should be satisfied with its performance nonetheless.

The Logitech G512 SE is an amazing keyboard for gaming. The blue switches are very responsive and the audible clicks give assurance that your keystroke is registered. The full RGB backlight is great for dark room gaming or to highlight important keys, and the function keys can all be reprogrammed with macros, though MMO players may find the lack of dedicated macro keys a bit disappointing.

The Logitech G512 SE is a wired-only keyboard and can't be used with mobile devices.

The Logitech G512 SE is a decent keyboard for office use. The keyboard provides a light typing experience that shouldn't cause any fatigue, and the switches are rated to last for a long time. However, noise can be an issue with the blue clicky switches, but the keyboard is available with silent linear switches if you're concerned. You'll need to get a wrist rest, though, and some keys may not function properly if you work on macOS.

The Logitech G512 SE is a good keyboard for programming. It provides a great typing experience that feels light and responsive, and the programmable keys are a welcome addition over the average office keyboard, even though they're limited to function keys only. The main downside is that G HUB is only available on Windows and macOS, so Linux users won't be able to customize the keyboard.

The Logitech G512 Special Edition is bad for use with a home theater PC. It's a wired-only keyboard, and the included cable might not be long enough to reach your computer from the couch. Also, it doesn't have a trackpad and dedicated media controls.

The Logitech G512 is a large, full-size keyboard. It doesn't come in a tenkeyless (TKL) variant.

The Logitech G512 SE has a good build quality that's very similar to the Logitech K840. The frame is made of hard plastic with an aluminum plate on top, and the whole keyboard feels very solid, with no signs of flex at all. The keycaps are doubleshot ABS, which is great for the longevity of the key legends, but the quality of the ABS plastic feels a bit cheap and may develop a shine over time that can make the keyboard look greasy. If you're looking for a keyboard with PBT keycaps, check out the Logitech G413 SE.

This keyboard has reasonable ergonomics. It has one incline setting but doesn't come with a wrist rest. The kickstands open up sideways to prevent them from collapsing if you push the keyboard forward too hard. If you want a keyboard with better ergonomics, check out the Razer Huntsman Elite.

This keyboard has full RGB backlighting and each key can be individually customized with Logitech's G HUB software.

The cable feels strong and you shouldn't have any issues with durability; however, it's not detachable.

The Logitech G512 SE has a good amount of extra features. It has a USB passthrough so you can plug in other peripherals or charge your devices, and you can set a macro or reprogram any of the function keys. There's also a Windows lock feature to prevent accidentally minimizing your game. Like the Logitech K840, this keyboard doesn't have a numlock LED indicator. If you want something with dedicated media controls, check out the Das Keyboard 4 Professional.

The Logitech G512 SE is a mechanical keyboard that uses proprietary switches made by Logitech. We tested the clicky GX Blue variant, but it's also available with tactile GX Brown and linear GX Red switches. These blue switches are light to press and they have audible tactile feedback to indicate when a keystroke has been registered.

Typing quality on this keyboard is great. The blue switches provide a satisfying click and they require very little force to actuate, resulting in a light typing experience. The keys are very stable, with no signs of rattling, and they're well-spaced, which is good for typing accuracy. The overall experience feels very responsive and shouldn't cause any fatigue over time.

Typing noise is quite loud if you choose to go with the clicky blue switches, so it may not be a good choice if you're in a noise-sensitive environment.

The latency on this keyboard is remarkably low. Most people shouldn't feel any delay. For an even lower latency, check out the EVGA Z15.

The Logitech G512 SE has good software support. It uses the G HUB software for customization, where you can individually control the backlight of each key. You can also set macros, but this is limited to the function keys only. The keyboard doesn't have onboard memory, so all profiles have to be saved using the software. If you need to move to a different computer, you'll need to install the software again and log in to your Logitech account to import your settings.

The G512 SE has decent compatibility. The G HUB software is available for Windows and macOS users, but some keys don't work on macOS, like Scroll Lock and Pause. All keys function properly on Linux, but you won't be able to customize them.

While we tested the Logitech G512 Special Edition with GX Blue clicky switches, it can be purchased with GX Brown switches, which give tactile feedback without the audible click, and GX Red switches, which are linear and silent. Aside from typing quality, we expect most of our results to apply to other variants as well.

The Logitech G512 SE doesn't have any special features that stand out in the market of mechanical gaming keyboards; however, the option to choose your preferred type of switches is nice, as clicky switches aren't suitable for everyone, especially if noise is a concern. For other options, check out our recommendations for the best gaming keyboards, the best mechanical keyboards, and the best RGB keyboards.

The Logitech G512 Special Edition and the Logitech G513 are two very similar keyboards that perform almost the same, but the G513 is more comfortable as it has a detachable wrist rest. Other than that, the main difference is the type of switches. Both options use Logitech proprietary switches; the G512 is available with different GX switches, while the G513 uses Romer-G switches. The GX Blue Clicky switches on our G512 unit have a longer pre-travel distance and require more force to actuate than the G513's Romer-G Tactiles. However, the G512 provides a better typing experience because the tactile feedback is more pronounced, and the longer pre-travel helps reduce typos. That said, the typing experience changes depending on which switch type you get. Other than that, the only other difference is that the G513 comes with a wrist rest.

The Logitech G512 Special Edition and the HyperX Alloy Origins are two wired-only keyboards that perform somewhat similarly. The HyperX has one more incline settings and feels better-built overall. All of its keys are macro-programmable, while the Logitech only lets you set macros to function keys. That said, the Logitech is available with different types of switches, so you can choose according to your own preferences.

The Razer Huntsman and the Logitech G512 Special Edition are fairly similar, but the Razer performs slightly better for gaming. Its optical switches have a lower pre-travel, so typing on it feels a bit more responsive. Also, you can macro-program all of its keys, while the Logitech only lets you set macros to function keys. That said, the Logitech is available with different kinds of switches so you can choose something that better fits your needs. Both keyboards have remarkable latency and full RGB backlighting.

The ZAGG Pro Keys and the Logitech G512 Special Edition are designed for different uses. If you're looking for a folio case keyboard to use with your iPad, the ZAGG is a better choice. It's compact and slim, making it easy to carry around with you, and you can use it via Bluetooth only. On the other hand, if you're looking for a full-size mechanical gaming keyboard, the Logitech is exactly that. It's wired, so you can only use it with the computer it's connected to.