Your browser is not supported or outdated so some features of the site might not be available.
Best
Gaming Mechanical Keyboards Wireless Mac iPad Programming Ergonomic Typing Budget Mechanical Quiet Logitech Cheap Razer RGB Gaming Under $100 Corsair Keychron Ducky
167
Keyboards store-bought and tested, supported by you via insider access, and when you purchase through links on our site, we may earn an affiliate commission. 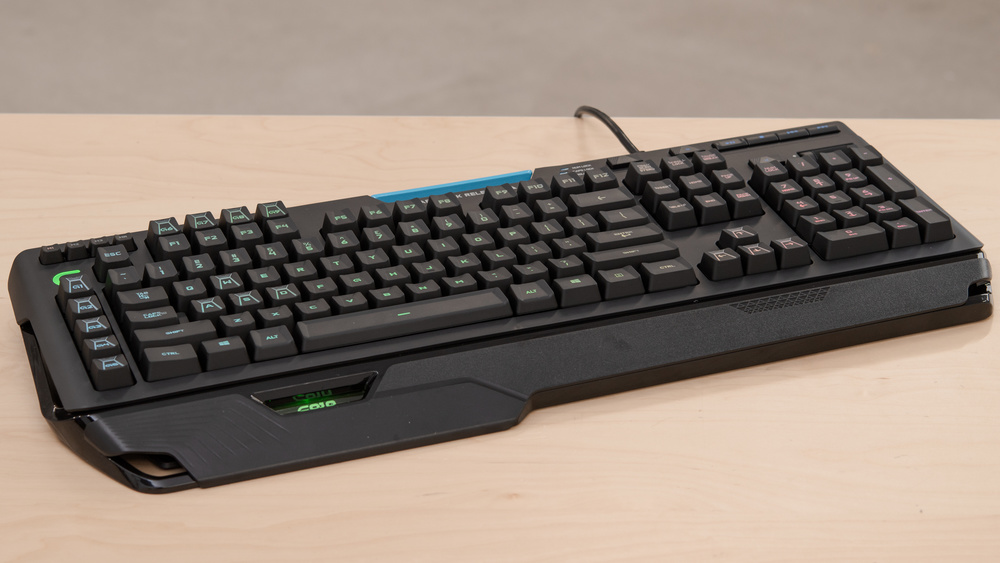 The Logitech G910 Orion Spark is an excellent gaming keyboard that features proprietary Logitech Romer-G Tactile switches. Unfortunately, while the keyboard offers great RGB lighting, it feels rather cheaply made and the keycaps have an unusual indented design that isn't for everyone and makes the overall typing experience a bit disappointing. It also has a half-wrist rest, giving the impression that this keyboard is only made for gaming since your right hand should be on your mouse rather than on the keyboard.

The Logitech G910 is an excellent gaming keyboard. It has very fast actuation Romer-G tactile switches that have a very short pre-travel distance. You can set a lot of macros and it also features full RGB lighting, but the board seems a bit flimsy and cheaply made.

The Logitech G910 is a wired-only keyboard that isn't designed to be used with mobile devices.

The Logitech G910 keyboard is a passable option for office work. This keyboard has mechanical switches that aren't too noisy, but its design offers mediocre ergonomics. It features half a wrist rest on the left side, making it uncomfortable and fatiguing to use your two hands to type on. The keycaps also feel cheap and have an unusual indented design that makes typing harder if you don't hit them in the center.

The Logitech G910 is an okay option for programming. It offers great backlighting and you can set a lot of different macros, but the overall typing quality and the build quality are quite disappointing. This keyboard is fatiguing to type on due to its half wrist rest and the board is entirely made of plastic.

The Logitech G910 Orion Spark is a rather big keyboard due to its full-size design and its non-detachable wrist rest. If you want a full-size keyboard that takes less space, check out the Logitech G512 Special Edition.

The Logitech G910 feels rather cheaply made when compared to other mechanical gaming keyboards. The frame is all made of thin plastic and the keycaps have an unusual indented design. They feel a bit cheap like the Razer Cynosa keys. The finish is prone to oily shines and fingerprints. For a better-built keyboard, check out the Razer BlackWidow Elite instead.

Update 09/03/2020: A previous version of the review stated the brightness can be controlled directly on the keyboard, when in fact it can't. The only way to change the brightness of the backlight is by choosing a brighter or darker color in the G HUB software.

The Logitech G910 has amazing backlighting and it features full RGB lighting. There isn't much backlight bleed and the colors shine well through the keycaps' legends.

This keyboard has a long enough cable to reach your desktop setup without any issue.

This is a wired-only keyboard and can't be used wirelessly.

The Logitech G910 has great extra features. It features dedicated media keys, a lot of programmable macro keys, and the ARX Dock for your cellphone. The stand itself doesn't do anything but you can use the ARX companion app to display in game stats or some PC temperatures and such. Note, however, that this dock doesn't charge your cell phone and the app is only useful for some games, and doesn't seem to be supported through Logitech G HUB, only the previous Logitech Gaming Software.

Typing quality on this keyboard is just okay. The keycaps feel cheap and their unusual indents make it harder to press the keys if you don't hit them in the center as there's more resistance when typing.

The typing noise on this keyboard isn't loud and should be suitable for an open-office environment without disturbing surrounding colleagues.

The Logitech G HUB software offers great customization options with the Logitech G910, but since the keyboard doesn't have any onboard memory, you'll always need the software to access your saved profiles.

This keyboard has decent compatibility as it's fully functioning on Windows and only the Scroll Lock and Pause keys don't work on macOS. Also, all keys work on Linux, but the software isn't available so you won't be able to customize the keyboard.

The Logitech G910 is a decent overall gaming keyboard that's designed for gaming. This shows due to its half wrist rest that's only made for the left hand, and the proprietary Romer-G Tactile switches by Logitech that have a very low pre-travel distance. It even has an integrated cellphone stand. However, this keyboard isn't the best for typing. For other options, check out our recommendations for the best gaming keyboards, the best mechanical keyboards, and the best RGB keyboards.

The Corsair K95 PLATINUM is a better keyboard than the Logitech G910 Orion Spark. You can set macros to all the Corsair keys, it's better built, and its ergonomics are better. You can also save profiles on the onboard memory, which you can't do with the Logitech. The Logitech features Romer-G tactile switches, while the Corsair has Cherry MX Speed linear switches, which have a shorter pre-travel distance.

The Logitech G513 is a better keyboard than the Logitech G910 Orion Spark. The G513's wrist rest is detachable, and its build quality is much better due to the sturdy aluminum faceplate. That said, the Orion Spark has an ARX dock for your phone and dedicated media keys.

The Logitech G613 LIGHTSPEED and the Logitech G910 Orion Spark are very different. Although both keyboards have dedicated media controls and macro keys, the G613 is a wireless keyboard while the G910 is wired. The G613 provides a better typing experience, but it lacks backlighting, which the G910 has. Unlike the G613, the G910's wrist rest is removable, but it's quite uncomfortable due to its unconventional shape.

The Logitech G910 Orion Spark is better than the Corsair K55 RGB Gaming Keyboard for most uses, and the Logitech's Romer-G switches provide a much better typing experience than the rubber dome switches on the Corsair. The keys on the Logitech are also individually-lit rather than zone-lit, but the Corsair comes with a detachable wrist rest for added ergonomics, and its companion software offers a cloud sync option the Logitech lacks.

The Razer BlackWidow Elite is a better gaming keyboard than the Logitech G910 Orion Spark. All of its keys are programmable, rather than just a few dedicated macro keys. Also, it comes with a very plushy and comfortable wrist rest, and the board feels noticeably more durable. On the other hand, the Logitech's key pre-travel distance is shorter and quicker to actuate.