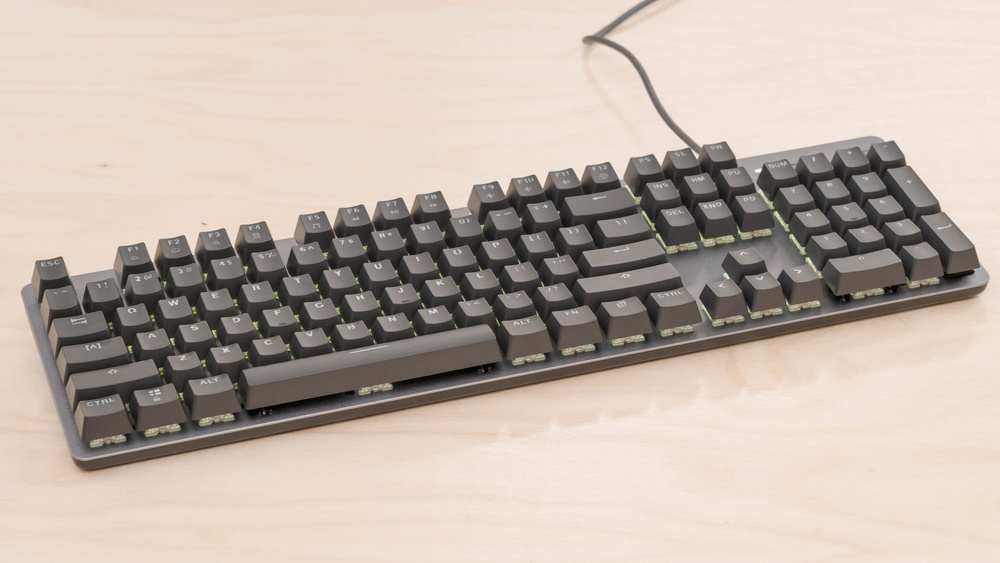 The Logitech K845 is a decent mechanical keyboard for office use. It's a full-size keyboard that feels well-built, and while our unit uses Cherry MX Blues, you can get it with other types of switches to suit your preference. The Cherry MX Blue switches provide a great typing experience with good tactile feedback, but they can be rather loud, which isn't ideal for quiet office settings. Unfortunately, it has very few extra features and lacks software for customization. Also, its latency is a bit high for a wired keyboard, which might disappoint some gamers.

The Logitech K845 is decent for gaming. The Cherry MX Blue switches on our unit have a fairly light operating force and a short pre-travel distance, which results in a quick and responsive gaming experience. However, its latency is a bit high for a wired keyboard, which might disappoint more serious gamers. Unfortunately, there's no software for customization, so you can't set macros to any of the keys.

The Logitech K845 isn't designed for mobile or tablet use.

The Logitech K845 is decent for office use. The Cherry MX Blue switches on our unit provide a great typing experience, but if you find them too loud for an office setting, you can get the keyboard with another type of switch to suit your preference. It doesn't feel tiring to type on, but some people might need a wrist rest, and one isn't included. It's fully compatible with Windows, and only a few keys don't work on macOS.

The Logitech K845 is decent for programming. The Cherry MX Blue switches on our unit feel fairly light and responsive, thanks to the short pre-travel distance and clicky tactile feedback. It has nice white backlighting that can be customized using the hotkeys. Unfortunately, there's no software for customization, so you can't set any macros or remap keys.

The Logitech K845 is bad for a home theater PC. It's a wired-only keyboard, which isn't ideal if you have kids or pets that might trip over the cable. Also, you need a separate mouse to move the cursor because there's no built-in touchpad. It has media controls, but the legends are printed on and don't light up in the dark, making them hard to see.

We tested the Logitech K845 Mechanical Illuminated Keyboard in black, which is the only size and color available for this model. It's available in a variety of switch types: Logitech GX Red, Blue, Brown, Cherry MX Red, and Cherry MX Blue. Our unit uses Cherry MX Blue switches.

You can see our unit's label here.

The Logitech K845 is a decent full-size mechanical keyboard for the office, but it has very few features, which is expected for a budget mechanical keyboard. It doesn't come with a wrist rest, and it doesn't seem to work with any of the Logitech software, so you can't set macros or remap any of the keys. On the plus side, it does have backlighting and feels quite well-built.

The Logitech MX Keys is better for office use than the Logitech K845. The MX Keys' scissor switches on our unit are much quieter than the Cherry MX Blues on our K845 unit, so it shouldn't be loud in an open office. Also, it's wireless and has a multi-device pairing feature, has a lower profile, and it's fully compatible with both macOS and Windows. However, the K845 has a higher pre-travel distance, which should help prevent typos.

The Logitech G513 is a much better keyboard than the Logitech K845. Since it's designed for gaming, the G513 has some programmable keys, customization software, RGB backlighting, and a USB passthrough. It also has lighter and more responsive keys, and it comes with a wrist rest. However, the K845 has a longer pre-travel distance, which should help prevent typos, and it's fully compatible with Linux.

The Razer BlackWidow is better than the Logitech K845, although it's mostly geared towards gaming. The Razer has full RGB lighting, lower latency, and outstanding customization software. On the other hand, the Logitech feels better built, and you may feel less tired typing on it because it has a lower profile.

The Logitech K845 is better than the Das Keyboard Model S Professional. The Logitech feels better built, has backlighting, and it shouldn't tire your fingers as much, thanks to its low front. However, the Das has a USB passthrough, which the Logitech doesn't.

The Logitech K840 and the Logitech K845 are both decent office keyboards. The K845 feels better built, its Cherry MX Blue switches require a bit more force to actuate, and it has backlighting. However, our K840 unit is fully compatible with macOS, and while it has customization software, there aren't many options.

The Logitech K845 is a full-size keyboard that takes up a fair amount of space. It's almost identical in size to the Logitech K480 Bluetooth Multidevice Keyboard.

The build quality feels great. It's mostly plastic with an aluminum top plate that feels nice and solid. The body has a slight flex to it, but it isn't noticeable when typing. The ABS keycaps have a rough texture for better grip, and some of the keys wobble when pressed, especially the Enter, Shift, Backspace, and Spacebar keys. There are five rubber feet at the bottom that do a good job of keeping the keyboard in place, and the incline feet shouldn't collapse when sliding the board around.

The Logitech K845 has excellent individually lit backlighting. You can control the brightness and cycle between five lighting effects using the function keys. The color is not quite white. There's a blue/green hue to it, although it's more noticeable in a dark room than in a bright one. The secondary functions on the F keys, like media and brightness controls, are printed onto the keys and don't light up, so they may be difficult to see in the dark.

The cable is rubber-coated and retains kinks from the packaging.

The Logitech K845 is wired-only keyboard and can't be used wirelessly.

The Logitech K845 has few extra features. You can control your media from the hotkeys, FN+F5 to F11. Unfortunately, you can't set any macros.

Our Logitech K845 uses Cherry MX Blue switches. You can get it with other switches if you prefer, but they would offer a different typing experience. The Cherry MX Blues provide good tactile feedback and are clicky. They have a short pre-travel distance and require some force to actuate, but the overall feeling remains light.

The typing quality is great. The Cherry MX Blue switches give nice responsive feedback and don't feel tiring to type on. The ABS keycaps have a rough texture that makes them grippy, and the standard spacing of the keys should make it easier to adapt to. If you don't like Cherry MX Blue switches, it's also available in different switch types.

The Cherry MX Blue switches on our Logitech K845 are loud and might bother those around you in an office setting. It's also available in different switch types that might be quieter to type on.

The latency is relatively high for a wired keyboard. It's fine for general productivity or even casual gaming, but it isn't ideal for competitive gaming.

This keyboard doesn't work with any Logitech customization software.

It's fully compatible with Windows and Linux, but the Scroll Lock and Pause Break keys don't work on macOS.