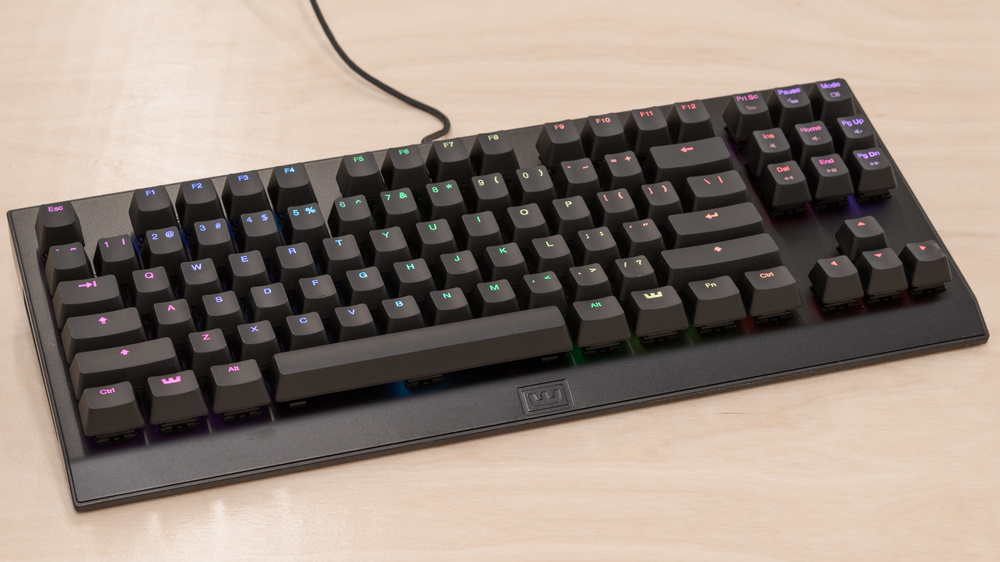 The Wooting one is quite a unique mechanical keyboard compared to what we've tested. It uses optical switches which allow you to vary the force you're putting on the keys to generate different inputs. It's a well-built board that features full RGB backlighting and has a companion app that allows for a lot of customization. The board is even hot-swappable, meaning you can easily change your switches without desoldering and resoldering, which is great. Unfortunately, it comes with ABS keycaps which don't feel as premium as some other high-end keyboards that have doubleshot PBT keycaps. On the upside, you can easily swap them out for your preferred set and the board is available in both linear or clicky optical switches to better suit your needs.

The Wooting one is a great gaming keyboard. Our current test bench doesn't take into account everything that this keyboard offers like the analog inputs, which are amazing for gaming thanks to multiple inputs possible per key, or force-related inputs. The board is well-built, features full RGB backlighting, and has a great app for customization.

The Wooting One isn't designed to be used with mobile devices and tablets.

The Wooting one is a decent office keyboard. Like most straight boards, it doesn't have the best ergonomics but still offers a good overall typing quality. You can easily set your preferred actuation point inside the software and the linear red switches aren't too noisy. On the other hand, this keyboard is also available in clicky blue switches, which are noisier.

The Wooting one keyboard is decent for programming. It offers a good typing quality, although its design isn't the most comfortable and ergonomic for long periods of work. On the bright side, the multi-inputs per key can be useful, and the board is compatible with Windows and Linux, and only a few non-alphanumerical keys don't work on macOS.

The Wooting one doesn't really have any other variants, although there is the Wooting two which is extremely similar. The Wooting two has a full-size layout, a USB-C detachable cable rather than micro-USB, and a few design changes. However, the two keyboards seem very similar overall, and both have the same blue and red switches. Note that there's also a Wooting two board with Lekker switches, which seem entirely different than the Linear55 and Clicky55 from Flaretech.

The Wooting one is quite a unique keyboard when compared to the others we've reviewed. It's slightly comparable to the adjustable OmniPoint switches on the SteelSeries Apex Pro keyboard but takes it a notch further with analog inputs. You can gradually control the depth of your input, just like you would on a controller joystick or trigger button. This can be very useful for gaming, but it's not compatible with every game. If you're looking for a more standard mechanical keyboard, check out our recommendations for best mechanical keyboards, the best gaming keyboards, and if you're on a tighter budget, check out the best cheap mechanical keyboards.

The Wooting one and SteelSeries Apex Pro are similar but different keyboards. Those two boards are the only ones we've tested that allow switch pre-travel distance customization. However, the Wooting also offers the possibility to use analog inputs, which the SteelSeries can't do. On the other hand, the SteelSeries comes with a comfortable wrist rest and its overall build quality feels superior. The board also allows for macro customization, which you can't seem to be able to do on the Wooting.

The Wooting one and the HyperX Alloy Origins are two amazing keyboards, but for different reasons. The Wooting has unique optical switches and allows for analog inputs, while the HyperX is just solid all-around. The HyperX comes in a variety of switches, offers bright RGB lighting, and feels very premium and well-made.

The Wooting one is very different than the Razer Huntsman Tournament Edition. The Wooting features optical switches that allow analog inputs, which the Razer can't do, even if it also uses optical switches. You can also customize the pre-travel distance of the Wooting's switches, although it doesn't get as short as the Razer's. On the other hand, the Razer feels much more durable and solid.

The Ducky One 2 Mini V1 is very different than the Wooting one keyboard. The Ducky has a smaller compact design while the Wooting is a TKL design. Also, the Ducky uses more typical mechanical switches while the Wooting uses optical switches, and allows for analog inputs. These switches also allow for pre-travel distance customization and everything can be controlled inside a nice app, which the Ducky lacks.

The Razer Huntsman and the Wooting one both use optical switches, but the Wooting offers more features. You can enable analog inputs like on a controller joystick or trigger button, which allows for more control in games. You can also customize the pre-travel distance of the Wooting's switches, which you can't do on the Razer. On the other hand, the Razer is a full-size keyboard with a Numpad, which the Wooting doesn't have, and it feels better-built and more durable.

The Wooting one is a TKL keyboard that takes a bit less space than a full-size keyboard since it doesn't have a NumPad. This leaves a bit more room for your mouse on your desk. If you're looking for a more compact option with optical switches, check out the Razer Huntsman Mini Analog.

The build quality of the board is good. The stabilizers feel decent but aren't on par with some other high-end keyboards. The keycaps are also ABS, which isn't the most durable and can chip over time. On the upside, the plastic used for the casing feels solid and there's an aluminum plate inside for stiffness. The board is also hot-swappable, which means you can easily change your switches without soldering. The upgraded version of this keyboard, the Wooting two HE, has PBT keycaps, which are more durable and feel better on the fingertips.

Like most straight boards, the Wooting one isn't the most ergonomic. It only has a single incline setting and doesn't come with a wrist rest. Some people might find it a bit high to type on during long periods. Note that Wooting does sell a silicone wrist rest separately.

This keyboard supports full RGB lighting. You can easily customize it inside the software and each key can be manually set to what color you want. Also, the modifier keys like CapsLock change color when activated.

This keyboard is wired-only, but you can still detach the long 2-meter cable, which makes it easier to replace if you need to.

The Wooting one is wired-only and can't be used wirelessly.

The Wooting one has hotkeys media control on the right side of the board and you can easily lock your left Windows key by pressing Fn+Windows. Where this keyboard really shines is when it comes to extra controls. It uses optical switches that allow for analog inputs, which are similar to what you would get with a controller. The amount of force you put on the key has an impact on the registered input. You can see it as a controller trigger where you can put minimal force to accelerate slightly in racing games or bottom it out to put the pedal to the ground. This is compatible with a games such as Rocket League, GTA 5, and a few others.

The Wooting one comes either in Flaretech Linear55 "Red" switches or Flaretech Clicky55 "Blue" switches. Our unit has the linear switches and we tested it at the lowest setting possible. There are multiple settings available that have a different pre-travel distance and actuation force required. The manufacturer advertises a customizable range of 1.5mm to 3.6mm. Although the maximum setting is advertized to be 3.6mm, we measured a maximum pre-travel distance of 2.84mm with 51.4gf. There's also the 'Tachyon Setting', which is supposed to be the fastest input lag and debounce time setting. We measured this setting to have a 1.57mm pre-travel distance with a 41.3gf.

The typing quality of this keyboard is pretty good. It feels quite similar to the SteelSeries Apex Pro, but the keys aren't as stable, which is disappointing. On the upside, since you can customize the actuation point, you can easily set it to your preference, which can help reduce typos. Unfortunately, the ABS keycaps don't feel as nice as doubleshot PBT keycaps to touch. We also don't expect the linear switches we tested to offer the same tactile feedback as the Clicky55 switches.

With the Linear55 Red switches from Flaretech, the Wooting one isn't too loud. The typing noise is kept to a minimum and should be fine for an open-office environment. However, we expect the clicky blue switches to be a bit noisier, as usual.

The Wootility software is great and has multiple features that we don't account for in our current test bench. You can set the board to be in digital or analog mode, customize analog bindings that can replicate an analog joystick, and even set multiple actions per key depending on how deep you press down the key. You can also customize the curve of the analog input. Like most other apps, you can customize the full RGB backlight and save different profiles. Unfortunately, it doesn't let you register macros, but on the upside, it's also available on Windows, macOS, and even Linux.

This keyboard has good overall compatibility. It can be used on Windows, macOS, and Linux, and the software is available on all these three platforms for customization. However, some keys like the PauseBreak, Rewind, Play/Pause, and Fast Forward don't work on macOS.