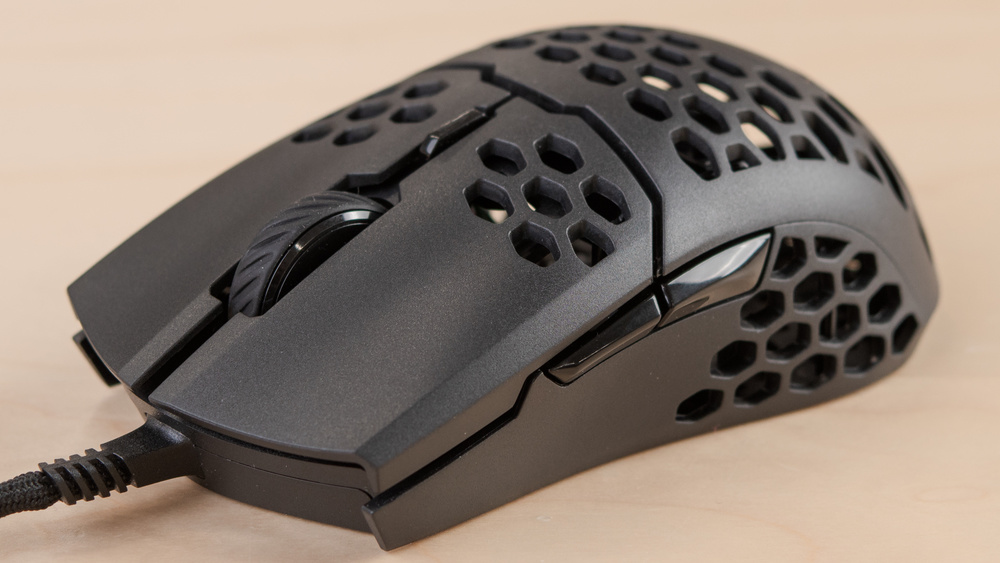 The Cooler Master MM710 is an excellent ultra-light gaming mouse. It's one of the lightest mice we've tested, thanks to its honeycomb pattern that covers the entire mouse, not just the top, and is great for gaming thanks to its low click latency, and customizable CPI and polling rate. While the mouse can be used for any grip type, its smaller size means it may not be the best choice for people with larger hands and unfortunately, the L/R buttons wobble from side-to-side, and the side buttons can be clicked by squeezing the mouse's frame, which is concerning.

This mouse is okay for office use. While its lightweight, ambidextrous design should be comfortable enough for most people to use all day, its build quality is questionable. It feels sturdy enough, but the side buttons can be pressed by squeezing the mouse's frame, which is concerning. It's also a smaller mouse and may not be suitable for people with larger hands.

This is a great mouse for FPS gaming. Its click latency is very good, and it has outstanding overall sensor performance. You can customize both its CPI and polling rate to suit your personal preferences, and it's comfortable enough for long gaming marathons. Unfortunately, it's a smaller mouse, so those with larger hands may be better off looking elsewhere.

This mouse is great for MMO games. While it only has two extra buttons, which is less than most dedicated MMO mice, they are both programmable, as well as the right-click, the mouse wheel click, and the up and down scroll of the mouse wheel. The mouse is lightweight and comfortable, though it isn't recommended for people with larger hands, and has excellent sensor performance.

The Cooler Master MM710 is an excellent mouse for ultra-light gaming. It's one of the lightest mice that we've tested so far and has outstanding performance. Its ambidextrous design should be comfortable in every grip, though people with larger hands may be better off with a slightly bigger mouse. While the mouse is made of dense plastic, unfortunately the side buttons can be activated by squeezing the frame below them, which is concerning.

The MM710 isn't recommended for travel. While it isn't as large as some other mice, it's wired-only, which can make it more difficult to store.

The Cooler Master MM710 is an amazing ultra-light gaming mouse and is one of the lightest we've tested so far. Unfortunately, there are reports of build quality issues, which we did get with our unit, where the buttons rattle. On the upside, its performance is amazing and it's great for people with smaller hands. See our recommendations for the best mouse, the best wired mouse, and the best FPS mouse.

The Razer Viper Mini is a better wired gaming mouse than the Cooler Master MM710. The Razer feels much better-built, is a bit more comfortable, has lower click latency, and has more programmable buttons. On the other hand, the Cooler Master is even lighter and has a higher max CPI, though few people will likely ever use it at its max CPI setting.

The Cooler Master MM710 and the Cooler Master MM711 are very similar ultra-light gaming mice; the only difference is that the MM711 has RGB lighting in the scroll wheel and palm region, making it heavier. Unfortunately, the MM710 we tested also has numerous build quality issues. Comparatively, the MM711 has excellent build quality and doesn't suffer from the same problems. Both mice share the same shape and size and are well-suited primarily for smaller hands and all grip types.

The Cooler Master MM710 is similar to the GLORIOUS Model O. They're both ultra-light gaming mice with a honeycomb pattern, though the Cooler Master is slightly lighter. Both mice perform similarly, but the Cooler Master can be customized to have a higher CPI. The GLORIOUS feels better-built, but it's a larger mouse that's better suited for those with larger hands, while the Cooler Master will be better for people with small or medium-sized hands.

The Cooler Master MM720 is better than the Cooler Master MM710. They're very similar and feature the same sensor, but the MM720 is lighter. It also feels more comfortable and has more programmable buttons. However, the MM710 has an ambidextrous design, if that's what you prefer.

The CoolerMaster MM731 is a better ultra-lightweight gaming mouse than the Cooler Master MM710. The MM731 has a right-handed shape and connects either wired with its charging cable or wirelessly via Bluetooth or its USB receiver. It feels somewhat sturdier, has a wider CPI range, and has an additional programmable button. It also has lower click latency. On the other hand, the MM710 is a wired-only model with an ambidextrous shape. It also has mouse feet that glide more smoothly.

The Cooler Master MM710 is a better ultra-lightweight wired gaming mouse than the Dream Machines DM6 Holey S. The Cooler Master is lighter and has a more flexible cable that doesn't retain as many kinks. It also has mouse feet that glide more smoothly, a higher maximum CPI, a lower lift-off distance, and better click latency. On the other hand, the Dream Machines feels somewhat sturdier, and you can adjust the CPI more precisely. Both mice are suitable for all grip types, but the Dream Machines is much more accommodating to a wider range of hand sizes.

The Cooler Master MM710 is an excellent ultra-light gaming mouse, while the Cooler Master CM110 is a good budget gaming mouse. The MM710 has a honeycomb body making it much lighter. It also has a much better cable and smoother-gliding mouse feet. Performance-wise it has a wider CPI range, an adjustable CPI, a much lower lift-off distance, and customization software. Comparatively, the CM110 feels sturdier, has three RGB lighting zones, and has much better click latency. Both mice are ideal for all grip types and best suited for smaller hands. However, the MM710 is also accommodating to large hands using some grip types.

The Cooler Master MM710 is a bit better than the XTRFY M4 RGB. The Cooler Master is lighter, its CPI range is much wider, and it has software for customization, allowing you finer control over the sensitivity setting. However, the XTRFY's build quality is better and is more comfortable to use.

The Cooler Master MM710 is an excellent ultra-lightweight, wired gaming mouse, while the HP OMEN Photon is a good, versatile, wireless gaming mouse. The Cooler Master weighs less than half as much as the HP and has mouse feet that glide much more smoothly. It also has a much higher maximum CPI. On the other hand, the HP has modular pieces that add thumb and pinky rests or extra side button configurations to better suit a right or left-handed user. It also has a lower minimum CPI, a more consistent sensor, and RGB lighting, which the Cooler Master lacks.

The Cooler Master MM710 has a honeycomb design that's similar to other ultra-light gaming mice, though it also has this along the side to be as lightweight as possible. It has an ambidextrous design with no RGB zones, and the unit we tested has a very non-descript matte-black finish, though it's available in glossy black, matte white, or glossy white as well. 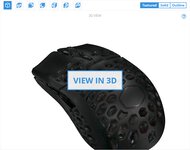 Although the MM710 is a fairly small mouse, it's wired-only and therefore may be slightly difficult to store while traveling.

The MM710's build quality is acceptable. While it's made of dense plastic and feels decently well-made, the plastic frame below the side buttons activates the buttons when squeezed, as if you're clicking the switch through the frame. The L/R buttons also wobble side-to-side a fair amount, which raises concerns over long term longevity. If you're looking for a similar mouse with a sturdier-feeling build quality, check out the XTRFY M42. If you're interested in a more robust-feeling ultra-light mouse that has a solid plastic body instead of a honeycomb design, check out the Endgame Gear XM1r.

The MM710 is one of the lightest mice we've tested and is only slightly heavier than the Finalmouse Ultralight 2. Like most ultra-light mice, it has no weight optimization and is at its lightest if you bungee the wire. If you want a very lightweight mouse that doesn't have a honey-comb pattern, check out the Razer Viper Mini.

The MM710's ergonomics are great. It's an ambidextrous mouse, though the buttons are on the left side. While it can be used with any grip type, it's a slightly smaller mouse and isn't recommended for people with large or extra large hands.

The palm grip works well with this mouse if you have small or medium hands. If your hands are larger, your fingers may go past the end of the mouse, and there are better options available.

This mouse is good for claw grip for small or medium hands. Due to this mouse's small size, people with larger hands may have to curl their fingers too much to be comfortable.

The MM710's cable is great. It's very lightweight, braided, and doesn't kink or get in the way.

The MM710 has six dedicated buttons, four of which can be reprogrammed (the CPI switch and left-click are not). The up and down scroll of the mouse wheel can also be reprogrammed. If you want something similar with more programmable buttons, then check out the Cooler Master MM720.

The MM710's click latency is very good and you likely won't notice any lag while gaming. If you want a mouse with even lower click latency, check out the Logitech G402 Hyperion Fury.

The MM710 has a standard incremented scroll wheel. There are no tilt buttons, and it can't be unlocked for an 'infinite' scroll, like some office mice.

Cooler Master's MasterPlus is an impressive piece of software. While it may appear cluttered and takes some time to get through, it gives you a ton of customization options, like customizing CPI, setting macros, and setting various profiles, among other things. Unfortunately, the software is only compatible with Windows.

While the MM710 is fully compatible with Windows, the MasterPlus software cannot be installed on macOS. If you use the mouse on a Mac, you're stuck with the default settings which can't be changed.