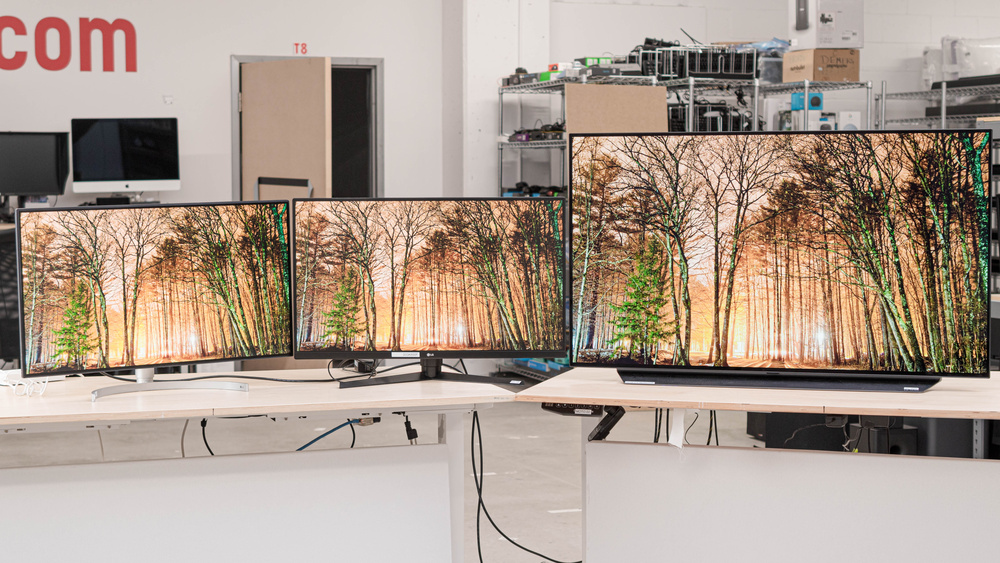 We've bought and tested over 50 LG monitors. LG is a South Korean brand that's well-known in the world of electronics, and they make a wide range of products, including monitors. Their monitor lineup offers both gaming and office solutions, so you'll likely find what you need. They make displays in a variety of sizes, from small 24-inch models to large 48-inch monitors. Their monitors are known for their outstanding motion handling and variable refresh rate support, but their stands lack good ergonomics.

Also, make sure to check out our recommendations for the best LG TVs.

LG and Dell directly compete with each other as they make office and gaming monitors. Dell's models usually have much better ergonomics and more office features, while LG excels with gaming models as they offer a wider range of models, and they usually have better motion handling.

LG offers options with larger screens and higher resolutions than most of its competitors. However, its office monitors don't have as good ergonomics or as many productivity features as other brands. Also, they don't make as many high-refresh-rate displays as some other brands, but they still have a ton of gaming models available. Regardless, you'll likely find what you need with LG.

LG offers three different monitor lineups: UltraGear for gaming, UltraWide, and UltraFine for office monitors. Their naming convention can be confusing at first, but once you learn, it's fairly easy to tell which lineup the monitor belongs to.

LG's monitors start with a number, which indicates the size, followed by the lineup letter:

Some models have another letter following those sets of numbers, but not all of them have it. They usually represent a feature of the monitor:

Lastly, there's one final letter that represents what color the body is: W for white and B for black.

LG makes monitors for both office use and gaming, and they're available in a wide range of sizes and shapes. Their UltraGear models usually offer great gaming performance with outstanding motion handling. They also produce more 4k and ultrawide monitors than some competitors. LG's options have limited ergonomics and rarely offer swivel adjustments; if that isn't an issue for you, you'll be happy with most of their monitors.