Monitor manufacturers have come up with new technology in recent years to improve your gaming experience. One of those is variable refresh rate (VRR) support which matches the refresh rate of your monitor with the frame rate of your source, even if the frame rate drops. This helps reduce screen tearing and helps to provide a smooth gaming experience.

We test every monitor with an NVIDIA graphics card to see which type of G-SYNC it has, whether native or compatible. This test is part of a bigger test where we look at its refresh rate range and different types of VRR support.

For our tests, we use a test PC with an NVIDIA RTX 3000 Series graphics card connected to the monitor. It's a fairly straightforward test as we open the NVIDIA Control Panel to see which type of G-SYNC support it has (Native or Compatible), use the NVIDIA Pendulum Demo to see the refresh rate range at which it works, and then look for any screen tearing, bugs, or flicker. We also play a few games to see if there are any problems.

There are four different possibilities of results for this test. Each result tells us something different about the monitor, and while native FreeSync monitors can still work with NVIDIA graphics cards, there are a few extra advantages you get with a native G-SYNC monitor too.

No: Some displays simply aren't compatible with NVIDIA's G-SYNC technology as there's screen tearing. This is becoming increasingly rare, as most monitors at least work with G-SYNC. 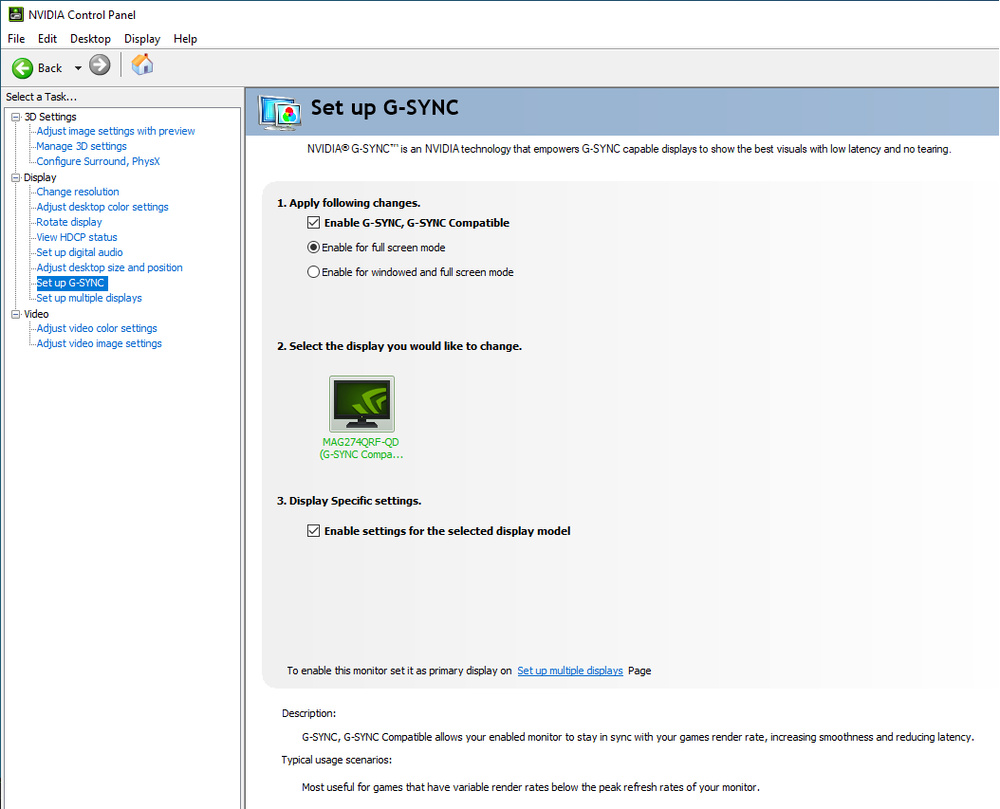 Compatible (NVIDIA Certified): NVIDIA officially certifies some monitors to work with their G-SYNC compatible program, and you can see the full list of certified monitors here. On certified displays, G-SYNC is automatically enabled when connected to at least a 10-series NVIDIA card over DisplayPort. NVIDIA tests them for compatibility issues and only certifies displays that work perfectly out of the box, but they lack the G-SYNC hardware module found on native G-SYNC monitors.

The simplest way to validate that a display is officially G-SYNC compatible is to check the 'Set up G-SYNC' menu from the NVIDIA Control Panel. G-SYNC will automatically be enabled for a certified compatible display, and it'll say 'G-SYNC Compatible' under the monitor name. Most of the time, this works only over DisplayPort, but with newer GPUs, it's also possible to enable G-SYNC over HDMI with a few monitors and TVs, but these are relatively rare.

We use the Pendulum Demo and check games to see if there are any noteworthy issues or oddities. 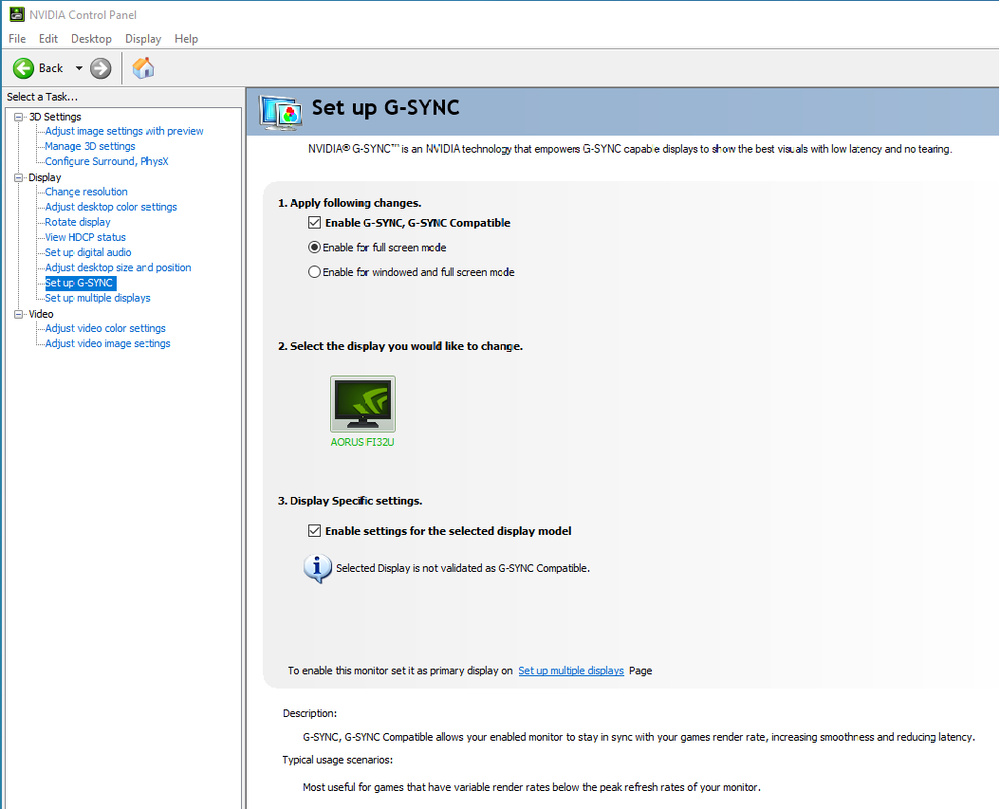 Compatible (Tested): Monitors that aren't officially certified but still have the same 'Enable G-SYNC, G-SYNC Compatible' setting in the NVIDIA Control Panel get 'Compatible (Tested)' instead of 'NVIDIA Certified'. However, you'll see on the monitor name that there isn't a certification here. There isn't a difference in performance between the two sets of monitors, and there could be different reasons why it isn't certified by NVIDIA, including NVIDIA simply not testing it. As long as the VRR support works over its entire refresh rate range, the monitor works with an NVIDIA graphics card. 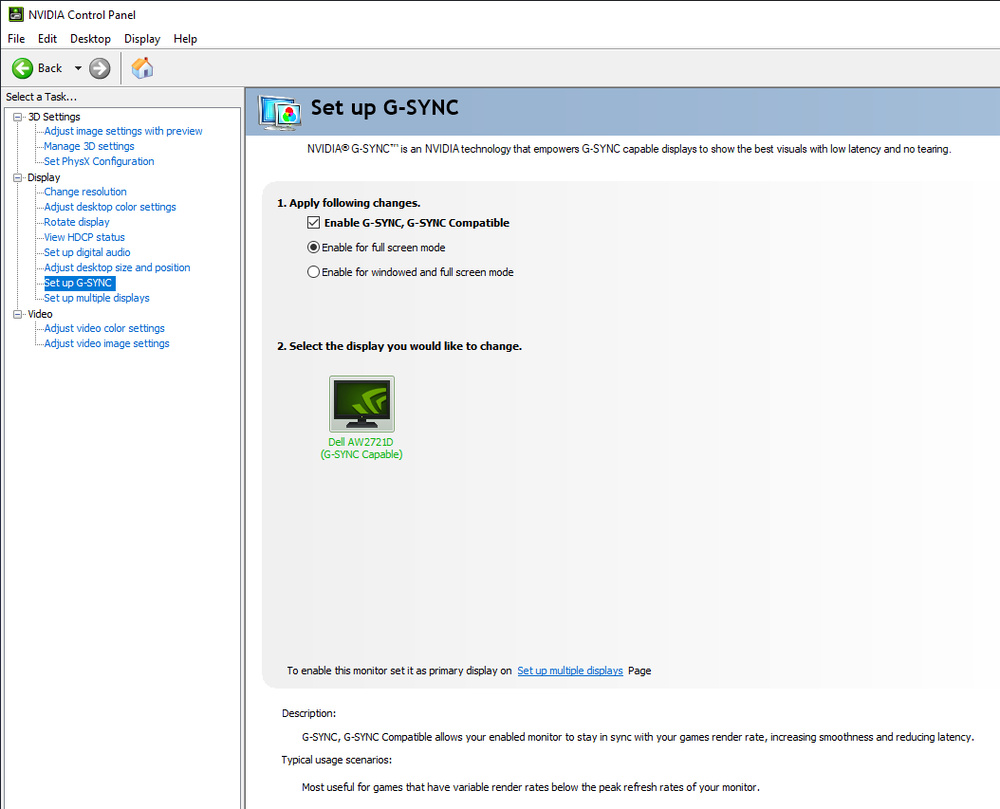 Yes (Native): Displays that natively support G-SYNC have a few extra features when paired with an NVIDIA graphics card. They can dynamically adjust their overdrive to match the content, ensuring a consistent gaming experience. Some high refresh rate monitors also support the NVIDIA Reflex Latency Analyzer to measure the latency of your entire setup.

Like with certified G-SYNC compatible monitors, G-SYNC is automatically enabled on Native devices. Instead of listing them as G-SYNC Compatible in the 'Set up G-SYNC page', Native monitors are identified as simply 'G-SYNC Capable' below the monitor name. We don't specify if it has a standard G-SYNC certification or G-SYNC Ultimate, as both are considered the same for this testing.

As mentioned earlier, there are different types of VRR formats, and the most common ones now are FreeSync, G-SYNC, and HDMI Forum VRR. They all present the same advantages for a nearly tear-free gaming experience, and the differences between them are on supported devices. Most graphics cards and monitors support at least FreeSync or G-SYNC, if not both, but HDMI Forum VRR is relatively new and isn't available on as many devices. It's part of HDMI 2.1 certification and is the only VRR format that the PlayStation 5 supports. The Xbox Series X, on the other hand, supports both HDMI Forum VRR and FreeSync. There's a relationship between G-SYNC and HDMI Forum VRR because any native G-SYNC monitor also supports HDMI Forum VRR.

Learn more about G-SYNC vs FreeSync

NVIDIA has a list of certified monitors that they update to show each monitor's certification. You can see the current list on NVIDIA's website. If your monitor is supposed to be supported but isn't working, make sure the monitor's firmware and your graphics card's drivers are up to date.

Note that the list on NVIDIA's website isn't always perfectly up-to-date; there may be other models supported that haven't been listed.

To enable the VRR support, you must first select "G-SYNC Compatible" from the Setup G-SYNC setting under NVIDIA Control Panel. From there, you can enable G-SYNC for either full-screen mode or both full-screen and windowed mode.

If you don't see this option, there are a few things you can check:

G-SYNC is one of the common variable refresh rate (VRR) formats to reduce screen tearing when the frame rate of your game drops. For VRR to work, both the monitor and graphics cards need to work with the same VRR format, and our G-SYNC test checks to see if a monitor supports G-SYNC VRR with an NVIDIA graphics card. Most modern monitors are at least G-SYNC compatible, which is a nice addition, as pre-2019, you needed a native G-SYNC monitor to work with NVIDIA graphics cards.