AMD FreeSync vs NVIDIA G-SYNC
Which is better?

One of the best features found on PC monitors, and even some TVs, is the ability to synchronize the refresh rate of the display with the content played, which reduces visible tearing caused by fluctuations in the frame rate. This is called Adaptive Sync or variable refresh rate, and it enables a smooth gaming experience nearly free of screen tearing and stutter, even in more demanding games where your computer might not be able to render the game at a higher frame rate. What is FreeSync? Semi-proprietary standard for Adaptive Sync, developed by AMD.

Who should buy it: People with AMD Radeon-equipped systems or people with less interest in variable refresh rate features. Who should buy it: People that already own NVIDIA-equipped systems.

See our picks for the best G-SYNC monitors

We'll compare the two technologies in their fundamental philosophy, their support and connectivity, their effect on input lag, and their overall availability and related future developments.

Both technologies refer to the software solution named Vertical Synchronization (or VSync for short) which has been used with display adapters for decades now. VSync works by limiting the application's frame rate to the vertical refresh rate of the monitor and only sending out a new frame when the screen is ready to receive one. Unfortunately, this isn't the best solution, since it tends to raise input lag dramatically and often doesn't provide a consistent experience with highly fluctuating framerates.

NVIDIA was the first to propose a hardware solution that would solve tearing while retaining the responsiveness and simplicity of unsynchronized displays. This was implemented as an NVIDIA G-SYNC module that replaces standard display scalers. All G-SYNC features only work with NVIDIA graphics, and are disabled when used with other sources.

AMD's FreeSync is essentially the same concept, but instead of requiring expensive proprietary hardware, it works on traditional off-the-shelf components. This gives the advantage of not increasing the costs of the hardware but also allows manufacturers to easily adapt existing designs (hence "Free"). This sounds great in theory, but in practice, it means that the FreeSync implementation is entirely up to the manufacturer. It is often the case that certain monitors only support the feature within a limited frequency range, reducing the usefulness of it.

Winner: G-SYNC. While it's more expensive, it offers a standardized experience across devices. Since all G-SYNC monitors use the same NVIDIA-made hardware which was designed from the ground up to be focused on gaming, they tend to have a low input lag. FreeSync monitors, on the other hand, are in the same position as standard non-adaptive monitors. It doesn't mean that FreeSync screens have inherently higher input lag, but you'll have to look at reviews for an input lag measurement before making your purchase.

The use of generic hardware has an advantage though. G-SYNC modules only support 1 to 2 inputs, depending on the generation. Newer ones that do feature an HDMI port in addition to DisplayPort 1.2 are usually limited to HDMI 1.4, which can be bandwidth constrained at higher refresh rates or resolutions, and it doesn't have G-SYNC functionality. FreeSync monitors can have as many inputs as the manufacturer desires, including legacy ports like VGA or DVI (FreeSync, however, only works on HDMI or DP). Unlike G-SYNC, FreeSync is supported over HDMI, but FreeSync over HDMI is not yet an Open Standard as it is with DisplayPort, so it only officially works on AMD graphics cards, including with the Xbox One.

Winner: FreeSync. While G-SYNC offers the certainty of low input lag, FreeSync offers more versatility which is useful if you plan to use your monitor with multiple devices.

Due to its proprietary nature, G-SYNC can only be used with NVIDIA graphics cards. It's a pretty mature technology, so it's quite likely that if you bought an NVIDIA-equipped computer in recent years, it supports G-SYNC.

AMD released the FreeSync protocol for open use through the VESA consortium as an official part of the DisplayPort interface, so anybody, including competitors NVIDIA and Intel, can use the open Adaptive Sync standard for their devices (due to inherent limitations, NVIDIA actually uses the open standard for G-SYNC equipped laptops). "FreeSync" is mostly used for marketing and requires certification and licensing from AMD for use. At this point, only AMD is using this standard, so the support is about equivalent between the two, but AMD does have the advantage of also supporting it on their Radeon graphics equipped series of APUs.

In January 2019, NVIDIA released an update to their GeForce driver that added support for DisplayPort Adaptive Sync. This allows anyone with an NVIDIA GTX 10- or 20- series graphics card to enable G-SYNC when connected to a compatible FreeSync monitor over DisplayPort. These monitors are officially labeled as G-SYNC Compatible. Find out more about NVIDIA's new G-SYNC capable mode here.

Winner: FreeSync. While the current support of the two is quite similar, other companies like Intel, and now NVIDIA, use the standard, rendering existing FreeSync displays more versatile.

While FreeSync is almost entirely aimed at simply being more accessible, G-SYNC aims more towards being an ecosystem for high-end gaming monitors to offer the best possible experience. As with most things, that doesn't mean a FreeSync monitor can't match a G-SYNC model, but every G-SYNC display comes with a default set of premium features.

First and possibly most important is the Ultra Low Motion Blur feature (ULMB for short), which is NVIDIA's name for its image flicker / Black Frame Insertion feature, which greatly enhances motion clarity. While it's currently impossible to use in conjunction with G-SYNC, it's still a great feature that isn't found on most FreeSync monitors.

Another feature that is found on every G-SYNC monitor is 'Variable Overdrive'. Effectively, it adjusts the monitor's overshoot setting for every refresh rate to reduce motion blur. Most monitors feature overshoot adjustments, but they tend to be automatically disabled when FreeSync is turned on since they're only really designed for a specific refresh rate. We've yet to see a FreeSync monitor that includes a similar feature.

You might be noticing a pattern here. G-SYNC tends to offer a more feature-packed and polished experience than FreeSync, but it also comes at a significant premium. When G-SYNC first launched, it was available as a DIY kit for upgrading an existing ASUS monitor, and it cost $199 to purchase from NVIDIA. Now, the price difference between monitors with native G-SYNC support versus native FreeSync support isn't quite as wide, but you're still paying a premium for G-SYNC.

What's also important to note is the wide support for FreeSync thanks to its minimal implementation costs. Looking forward, it isn't far-fetched to expect every new "standard" monitor to feature some form of Adaptive Sync, while G-SYNC will be reserved for a select list of premium-oriented gaming monitors. A good way to see this is the number of models found in retailers. Newegg.com, at the time of writing, stocks 277 G-SYNC monitors and over 1,000 FreeSync monitors.

FreeSync is also becoming more prevalent on TVs thanks to HDMI 2.1, which allows support for high-resolution signals at higher frame rates. HDMI 2.1 has also introduced HDMI Forum VRR, a third VRR format that's similarly based on the Adaptive Sync protocol but only works over HDMI as it's intended for HDMI 2.1 sources. 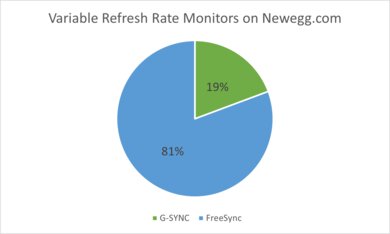 Distribution of FreeSync and G-SYNC on Newegg.com

Winner: FreeSync. Due to its open nature and minimal additional costs for manufacturers, FreeSync-capable monitors tend to be both easier to find and less expensive than G-SYNC monitors.

Depending on your needs and preferences, you'll find that there's no clear winner between the two technologies. In most cases, your best choice is picking the technology that works with your computer: G-SYNC if you have an NVIDIA graphics card, and FreeSync if you have an AMD graphics card. If comparing them directly, the most important feature works exactly the same on both, but G-SYNC tends to offer a more polished and consistent platform for a premium (which means that the best monitors around are mostly G-SYNC), while capabilities can vary wildly between the wide range of FreeSync models found in every price range.