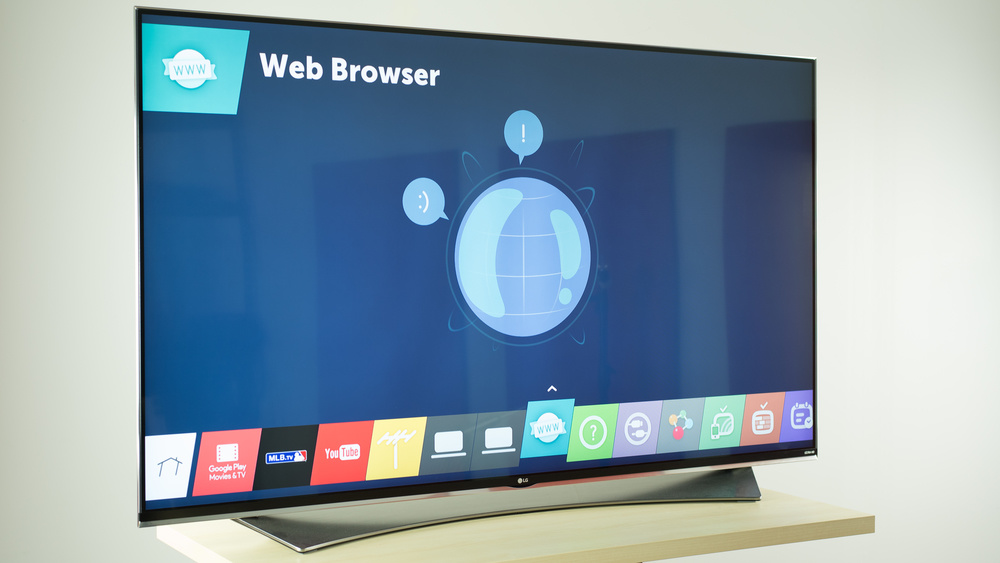 The LG UF9500 UHD TV is LG's flagship 4k LED TV. Despite its plethora of features, the image quality is sub-par, especially when watched in the dark. For a well-lit, wide living room with seating on the sides, it will still fit the bill, and most will enjoy its good smart functions.

The LG UF9500 is the flagship 4k LED TV from LG. Feature-rich, it still struggles with picture quality because of its low contrast and grayish blacks. It will shine in a well-lit room, and when viewed from the side, but even then, sports fans might be disappointed by the poor screen uniformity. Gamers will enjoy its motion handling and responsiveness, though. As for movie lovers or people that like to watch TV in the dark, they will be happier with a different, and probably even cheaper TV.

The LG UF9500 looks high-end with its particular stand. The TV is very slim on the upper portion, and although the middle and bottom portions are a bit thicker, it still manages to look sharp overall. Like some other recent TVs from LG, its back is all white, which is something to keep in mind if the TV won't be close to a wall.

The plastic stand mimics the look of stainless steel convincingly. It is very wide, but its footprint is a little shorter than it appears. Total dimensions of the stand for the 65" TV size: 44.9" x 9.6". Footprint: 37.8" x 9.3".

Black will appear gray in a dark room, which isn't ideal.

The local dimming zones are too big to provide a real improvement to the picture. In our test, when the dot is moving fast, the middle zones don't appear to light up anymore. Only the left and right edges of the screen lit up (almost half of the screen lit up for each side).

Uniformity is particularly bad. In fact, it is the worst we have seen to date. Edges of the screen are very dark and banding can be seen in middle of the screen on most content. It is especially distracting for sports on long camera pans over playing surfaces. For example, in football, long passes where the camera travels from one end of the field to the other will reveal the 'dirty screen effect' (DSE).

Like other TVs that have IPS panels, the LG UF9500 has a great viewing angle. Watching from the sides won't degrade picture quality as much as most other LED TVs with VA panels.

Update 01/06/2017: We have changed the methodology of testing. Since this is an old TV which we don't have anymore, we extrapolated the results from 2016 TVs.

All-black screens are cloudy looking. Some flashlighting (light leakage) can be seen on the top left and bottom right of the screen. Massaging the screen with a soft cloth didn't help.

Colors were off by default, but an untrained eye may not notice the problems.

Calibration was hard to achieve, and we had to lower contrast to correct the more pronounced gamma issues. Our settings then give a less-bright picture, with lower contrast than what the TV can do by default. It was a sacrifice that has to be made to get the grayscale close to gamma 2.2.

DVDs and standard TV content look great once upscaled on this set.

Blu-rays looks sharp without any issues.

The LG UF9500 can display a wide range of colors when 'Color Gamut' is set to 'Wide'. On normal contents, this option will result in over-saturated colors.

It reflects slightly more light than average, but there are no rainbows around bright objects.
Maximum brightness of the UF9500 is average.

Passive 3D is comfortable to watch but there is a bit of crosstalk, as you can see on the left side of our logo. 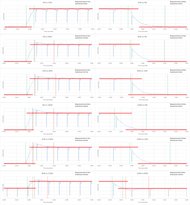 The response time is fast, so moving sequences will stay defined. The trail following the logo has some length, but is faint enough not to be bothering. Most of the transitions have overshoot, but it isn't apparent in our moving logo test. 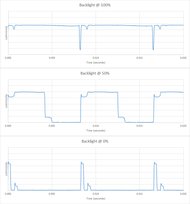 24p sources like Blu-ray will look smooth, without judder. You can only get rid of judder on 60p and 60i by using motion interpolation, which adds the soap opera effect.

It isn't the fastest TV around but you most likely won't complain about responsiveness. Controls will feel good for all kinds of games. Motion interpolation isn't recommended while gaming, because it increases the input lag too much.

Most PC inputs are compatible, except for 1080p @ 120Hz. For all supported modes, chroma 4:4:4 can be enabled for sharp-looking text. To enable, change the input icon to PC. While in 4k, 'HDMI ULTRA HD Deep Color' must also be turned on. Under PC mode, the input lag is the same as in game mode as long as the 'Game' picture mode stays selected.

Very good low-end extension and good maximum loudness. The frequency response is decent too, except under maximum load, where pumping may be present.

Very good distortion results overall. We did, however, experience some strange behavior (clicks and pops) with our unit. It happens only at high frequencies, with the volume on the TV set to 25 and lower (see the spikes above 3 KHz on the blue line). The problem seems to go away when the volume is increased above 25. This issue may not be audible under regular use, but it was quite audible and reproducible with our test signal.

WebOS 2.0 is the smart platform running on the LG UF9500 and it offers a very good interface. It could have been better with more apps, but the most popular ones are there. Combined with the great interface, the magic remote makes everything easy to navigate and can act as a universal remote for your other connected devices, such as a cable box and receivers. Switching inputs feels like using apps, which is great.

You can see our full review of the LG WebOS here.

The magic remote included with the LG UF9500 has numbers on it and more buttons compared to last year's model. It makes navigation even better.