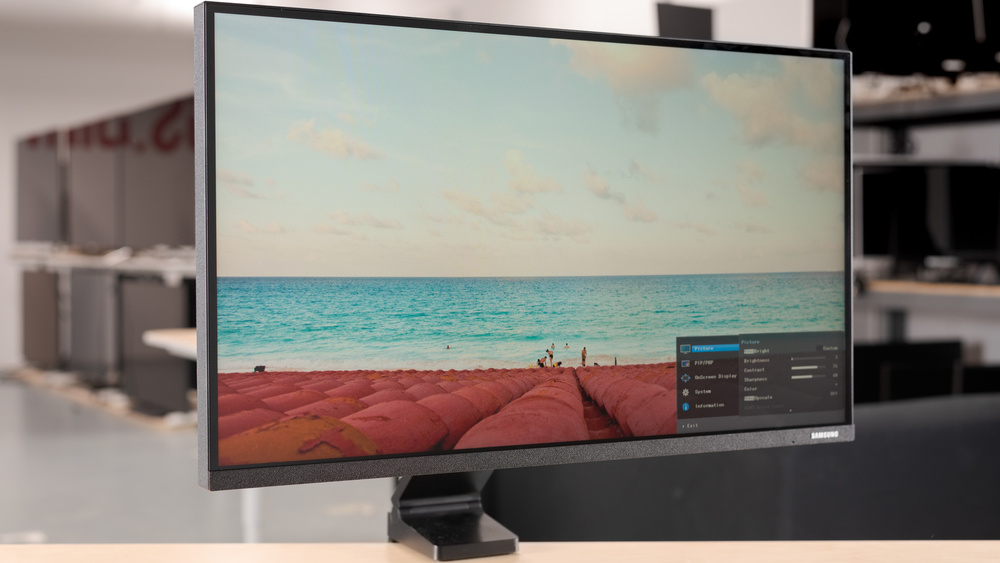 The Samsung Space SR75 is a decent 27", 1440p monitor with a unique stand. The space-saving stand limits dead-space on your desk, but slightly limits the Space's versatility. It delivers mediocre picture quality as it has bad viewing angles and poor black uniformity. It has a great native contrast ratio, which is good for dark scenes. It has a great 144Hz refresh rate, outstanding low input lag, and it supports AMD's FreeSync variable refresh rate technology, for a nearly tear-free gaming experience.

Decent monitor for most uses. It has good screen real estate, which is good for multitasking. The native contrast ratio is very good, so blacks look black in dark scenes, but it has poor black uniformity. The 144Hz refresh rate is great for gaming, and it has outstanding low input lag. Unfortunately, the image degrades when viewed at an angle.

The Space SR75 is an acceptable monitor for office use. The 1440p, 27" screen is great for multitasking, and it supports both Picture-In-Picture and Picture-By-Picture, which is great for working on two computers at once. It can get decently bright and has decent reflection handling, so it should look good in most rooms. Unfortunately, the image degrades when viewed at an angle.

This is a great monitor for gaming. It has a fast refresh rate and excellent response time, as well as outstanding low input lag, for a responsive gaming experience. It also supports FreeSync with the latest firmware update, ensuring a nearly tear-free gaming experience. Unfortunately, the image degrades when viewed at an angle.

Decent monitor for multimedia. It has a very good native contrast ratio, good for watching dark scenes, but unfortunately, it has poor black uniformity. The Space SR75 has a fast response time, so motion looks great, with very little motion blur. Unfortunately, the image degrades rapidly when viewed at an angle, so it isn't ideal for watching with a group of people.

Decent monitor overall for media creation. The 27", 1440p screen allows you to see more of your work than a 1080p monitor. The unique stand has an outstanding tilt range, but can't rotate the monitor to a portrait orientation. Unfortunately, the image degrades when viewed at an angle, and it doesn't support HDR.

The Samsung SR75 does not support HDR. For a decent HDR Gaming monitor, check out the Samsung CHG70 instead.

We tested the 27" Space S27R750QE, version FA01. It is also available in 32", but the larger variant has a higher resolution and lower refresh rate, and we don't know how it performs.

If someone comes across a different type of panel or if their Samsung Space doesn't correspond to our review, let us know and we will update the review. Note that some tests such as the gray uniformity may vary between individual units.

The Space we reviewed was manufactured in January 2019.

Compared To Other Monitors

Left: Samsung CHG70. Middle: Samsung Space S27R75. Right: ASUS ROG PG279Q.
Unlike our other photographs, this picture wasn't taken under a controlled environment, so do not draw conclusions from it.

Overall, the LG UltraFine 4k is a bit better than the Samsung Space SR75, but the SR75 is much better for gaming. The UltraFine has a higher native resolution and much better viewing angles. The SR75 has better contrast, so it's a better choice for a dark room, and it has much better gaming performance. The SR75 has a higher refresh rate, it supports AMD's FreeSync variable refresh rate technology, and it has much lower input lag, for a more responsive gaming experience.

The ViewSonic VX2758-2KP-MHD is better than the Samsung Space SR75, unless you're planning on using your monitor in a dark room. The ViewSonic's IPS panel has much better viewing angles, and the unit we tested has better black uniformity. The ViewSonic also has an optional black frame insertion feature, which some people like for gaming. On the other hand, the Samsung has much better ergonomics, with a unique stand that has an impressive range of motion, and the VA panel delivers much deeper blacks, which is especially noticeable in a dark room.

The Samsung Space SR75 is a bit better than the Samsung CF398 for most uses, and is much better for gaming. The SR75 has a much higher refresh rate, and a faster response time, resulting in much clearer motion, with less blur behind fast-moving objects. The SR75 also has a higher native resolution, resulting in a sharper image and clearer text.

The Samsung CHG70 is much better than the Samsung Space SR75. The CHG70 supports HDR, has much better reflection handling, and it has an optional black frame insertion feature. The CHG70 also has better ergonomics, despite the Frame's unique space-saving design.

The Samsung Space SR75 has a great design. The unique stand takes up very little space, freeing up valuable space on your desk. The stand isn't without its flaws, however, as the monitor can't be rotated to a portrait orientation, and there is no VESA mount. The display portion has thin bezels, and the monitor looks great in a multi-monitor setup.

The stand consists of a small clamp that has to be used to attach the monitor to a desk. It takes up very little space, but does prevent the desk from being placed flush with the wall behind it.

Overall, the Samsung SR75 has mediocre ergonomics. The stand arm has an impressive range of motion, making it easy to place the monitor in an ideal viewing position, but it can't swivel and the monitor can't be rotated to a portrait orientation.

The height can only be adjusted by tilting the monitor forward, which limits the versatility of the stand a bit.

The back of the Space SR75 is very plain, with vertical grooves running the entire back. The inputs are inset into the back of the monitor, similar to many Samsung TVs. Unfortunately, there is no VESA mount.

There is a cable management channel in the back arm that can be used to run the cables from the back of the monitor all the way to the bottom of the stand. Samsung has also included a unique extension cable that combines the HDMI and power cables into one.

The borders of the Samsung SR75 are thin; great for a multi-monitor setup or for gaming, as they are not very distracting.

The thickest part of the monitor is the clamp at the base. The display section is only 1.1" thick.

Overall, the Samsung SR75 has good build quality. It is mainly made of plastic, but there are no glaring issues in the construction. It wobbles a bit when the desk is nudged, but not enough to be distracting when typing long texts.

The Samsung SR75 has a very good native contrast ratio, in line with other VA monitors like the Samsung CHG70 and Dell S3219D.

The Samsung Space SR75 does not support local dimming. The above video is provided for reference only.

Decent peak brightness with SDR content, so there should be no issues using this monitor in a bright office space. Unlike the Samsung CHG70, there is no fluctuation in brightness with different content, which is great.

We measured the peak brightness with the 'Custom' Picture Mode.

The Samsung Space does not support HDR. 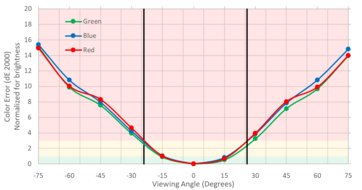 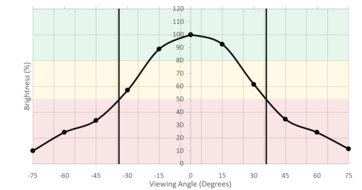 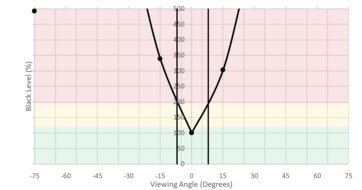 The horizontal viewing angle is bad. The black levels increase significantly when viewed even slightly off-angle, and the entire image fades noticeably.

These results are similar to most VA panels, similar to the Samsung CHG90 and MSI Optix G27C. 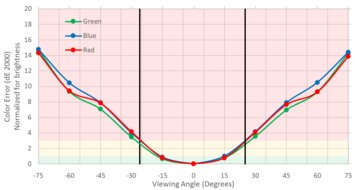 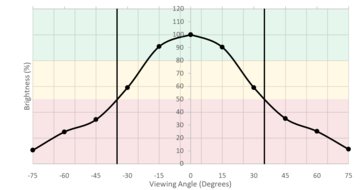 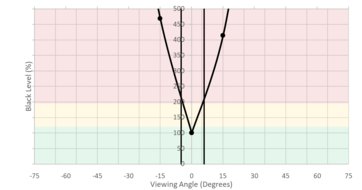 The vertical viewing angle is bad. Like the horizontal viewing angles, the black levels increase rapidly when viewed even slightly off-angle, and the image fades as you move to wider angles.

Great gray uniformity, with very little dirty screen effect. In near-black scenes, the uniformity is even better, but the sides of the screen appear a bit brighter than the center.

The Space SR75 has bad black uniformity. There is noticeable backlight bleed around the four corners, which may be distracting during dark scenes in a dark room.

There are a few colored spots noticeable in our black uniformity image. These are not noticeable in real life, and are seen here due to the two second exposure we use for this image. 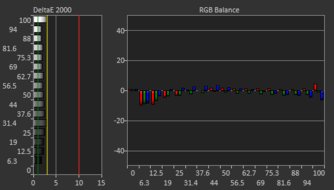 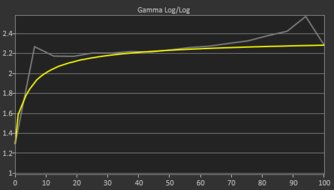 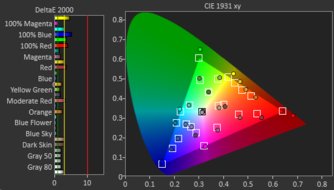 Out of the box, the Samsung SR75 has great accuracy. The white balance and color dE are low enough that most people won't notice any inaccuracies, and the color temperature is close to the calibration target of 6500 k. Gamma follows the target curve closely, but some scenes appear darker than they should. 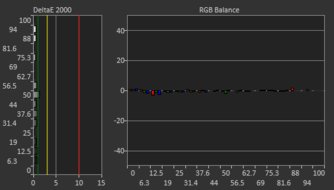 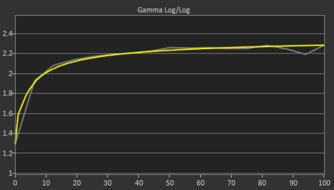 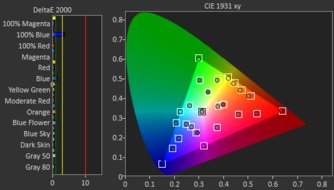 After calibration, the monitor is extremely accurate. Any remaining inaccuracies are too small for anyone to notice, and gamma follows the target curve almost perfectly. The color temperature is much closer to the target of 6500 k.

You can download our ICC profile calibration here. This is provided for reference only and should not be used, as the calibration values vary per individual unit, even for the same model, due to manufacturing tolerances. 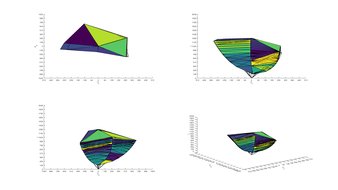 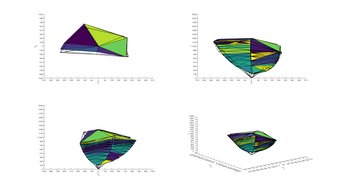 The Samsung SR75 does not support HDR.

The Samsung Space SR75 does not support HDR.

There is no temporary image retention on the Samsung Space, which is great. There is a retained image on the first image taken immediately after showing our high-contrast static test image for ten minutes (shown above). This is not noticeable in real life, and is only noticeable here because the image is overexposed.

Update 10/07/2019: We retested the gradients at 120Hz with 10-bit color. In this mode, the Space has outstanding gradients, with almost no banding in areas of similar color.

At the monitor's native 144Hz refresh rate and 1440p resolution, it only supports 8-bit color, and there is more noticeable banding in this mode.

There is no noticeable color bleed, which is great.

The Samsung SR75 has decent reflection handling. There shouldn't be any issues using it in a brighter office, but if there are windows nearby the glare might be distracting. 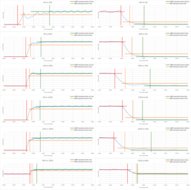 The Samsung Space SR75 has an excellent response time. There is very little motion blur behind fast moving objects, which is great for watching movies or playing games.

The response time can be switched between three modes; we recommend 'Response Time Faster,' as the 'Fastest' mode has more overshoot, but the improvement in actual response time is negligible. 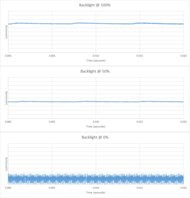 Update 05/16/2019: The dimming frequency field has been updated to include '>1000 Hz' for monitors with high flicker frequencies.

The Space SR75 is nearly flicker-free. As the brightness decreases, the backlight begins to wobble slightly at about 12kHz, which is not noticeable at all. There is no optional black frame insertion feature.

The Samsung SR75 has a great 144Hz refresh rate, which should please most gamers. It now supports FreeSync as well, and has an excellent range. Depending on when your Space SR75 was manufactured, it might support FreeSync out of the box, or it might require a firmware update.

Update 10/07/2019: We've retested the SR75 with the latest firmware (Version 1006.3), and the input lag has decreased considerably. We've also tested the VRR input lag, as it now supports FreeSync.

The 27", 1440p screen is great for multitasking or for a more immersive gaming experience. The 32" model has a 4k screen with a 60Hz refresh rate.

The Space SR75 has a limited selection of inputs, with only 1 HDMI port and 1 mini DisplayPort connection. There are no analog connections for older devices, and there is no headphone/speaker jack.

The Samsung Space monitor has very few additional features. It supports both Picture-In-Picture and Picture-Beside-Picture modes, which is great for working with two computers at once. It does not support HDR, and there are no internal speakers.

The Space SR75 features similar controls to most other Samsung monitors.

—
Features
In The Box

The external power brick can be used with the monitor directly, or it can be plugged into the HDMI and Power extension cable as shown here.
—