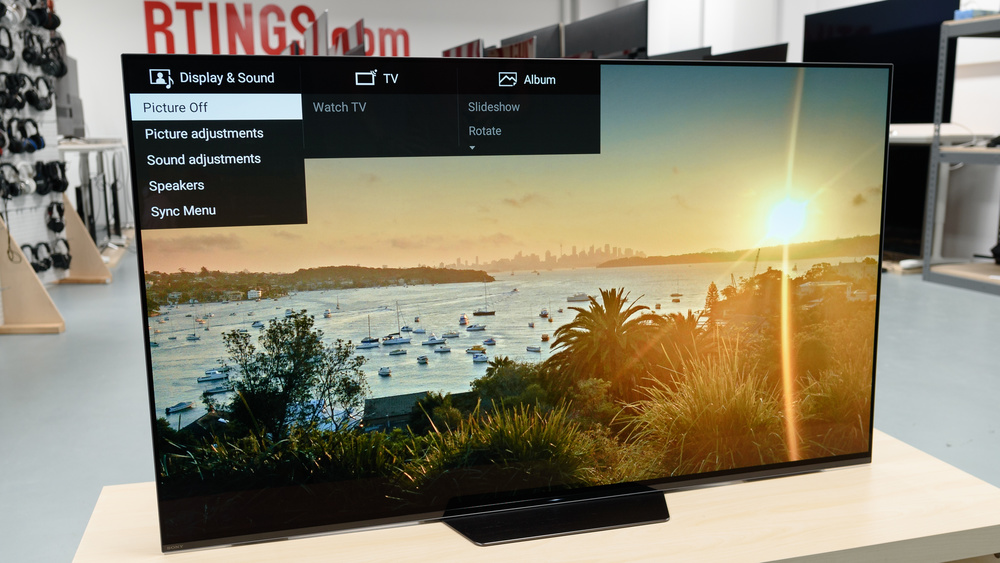 The Sony A8F is a 2018 4k OLED TV with excellent performance for a variety of different usages. It has excellent picture quality, with perfectly deep blacks that looks impressive in a dark room. Motion handling is excellent due to the instantaneous response time, but this lack of blur can make low frame rate content appear choppy. Like the Sony A1E and other OLED TVs, it isn't perfect as the brightness changes depending on screen content and there may be risk of burn-in with static content.

Excellent TV for a variety of uses. The perfect blacks of the emissive display result in excellent dark room performance. In a bright room, the reflection handling is excellent. Motion handling is also excellent due to the instantaneous response time, which is great for sports or gaming. Unfortunately, the brightness of the screen changes depending on the content and there may be a risk of burn-in with static content.

Outstanding TV for watching movies. Picture quality is impressive when viewed in a dark room due to the perfect blacks and black uniformity. Gray uniformity is also great, and 24p movies can always be played at the correct cadence. It isn't perfect though, as some stutter may be noticeable with low frame rate content due to the instantaneous response time.

Great TV for shows in a bright room. Picture quality is impressive and image remains accurate when viewed at an angle. Reflection handling is also excellent for a bright room and the TV brightness is also good enough that it shouldn't be an issue for most rooms. Android TV also isn't as intuitive to use for casual watching as other platforms, and there may be a risk of burn-in with lots of static content.

Great TV for watching sports in a bright room. Picture quality is impressive and instantaneous response time means that only a short trail of persistence blur is visible behind fast motion. Image remains accurate from an angle, which is great for watching games with large groups of people. Unfortunately the screen brightness changes depending on the content, especially with large bright areas such as hockey.

Excellent performance for gamers. Instantaneous response time means only a short trail of blur can be seen behind fast-moving objects, which can be cleared up with the black frame insertion feature. Input lag is good but is a bit higher for 1080p sources. Unfortunately, there may be a risk of burn-in with static content.

Excellent TV for watching HDR movies in a dark room. Picture quality is remarkable due to the perfect blacks. The Sony A8F can produce a good peak brightness in HDR and also has a wide color gamut to produce saturated colors. There are no cadence issues with 24p content but some stutter may be noticeable, especially with long panning shots due to the instantaneous response time.

Superb TV for gaming in HDR. Input lag is low with 4k and HDR so the TV feels responsive. It has excellent picture quality due to the perfect blacks and can produce a good HDR brightness especially with small highlights. The Sony A8F can also produce saturated colors due to the excellent wide color gamut. Response time is instantaneous, so very little blur is seen behind fast-moving content.

Great choice for a PC monitor. The TV feels responsive due to instantaneous response time and low input lag at 4k. The edges of the screen also remain accurate when viewed from close. It supports Chroma 4:4:4 for clear text across all backgrounds. Unfortunately, large white windows can't get very bright and there may be a risk of burn-in with static content.

The Sony A8F OLED TV is extremely well designed. The stand has a very small footprint and fits well in any decor. The TV is well built and there are no obvious gaps or loose panels. The TV has a very small frame and delivers an immersive viewing experience, especially when wall mounted.

The stand has a very small footprint and will fit on most tables. The stand adds very little height to the TV. There are two small rubber spacers (not shown) that add stability, but don't necessarily need to be on the table.

The design of the stand is significantly changed from the A1E. It takes up less space and the TV does not tilt as much.

The back of the TV is very clean. There are plastic panels that cover all of the bolts and connections and provide cable management.

The borders are very thin on the Sony 55A8F. When watching TV from a few feet away, they are almost not noticeable.

The Sony A8F is thin but slightly thicker than the LG C8. The electronics are more spread out over the back of the TV and it is more uniform. The screen seems to be better supported by the frame than on the C8.

Excellent build quality on the A8F. There are no obvious gaps or loose paneling. The top panel does have some flex to it, especially in the bottom corners, but this should not cause any issues.

Like all OLED TVs, the Sony A8F has an infinite contrast ratio. It performs exceptionally well in a dark room.

There is no need for local dimming on OLED TVs as there is no backlight. This video is provided for reference only.

Good peak brightness with SDR content. Screen brightness varies depending on the content on screen due to the TV's ABL. The LG C8 is slightly brighter in most scenes due to the less aggressive ABL. The A8F is a little bit brighter than the A1E, but it is not a significant difference.

ABL on the A8 can be disabled by setting 'Peak Brightness' to Off, in which case the TV's brightness is constant at ~110 cd/m² regardless of content. This could be useful if watching TV in a dark room and you don't want the screen brightness to fluctuate or for PC use.

Update 02/27/2018: Retested the brightness using a PC as the source, so we can automate testing; previously we were using a Samsung K8500 Blu-ray player as the source, but we found that it was sending a brighter signal than a PC (perhaps by sending 'brighter than white' stimuli). The A8F was retested with the PC as the source, and treated this signal differently, causing its measured brightness to be ~50 cd/m² less; however, we consider this to be more accurate to most sources. The test scores have been updated.

Good peak brightness with HDR content. While far from the 1000-4000 cd/m² HDR is mastered for, it is bright enough to enjoy HDR content in most rooms. The brightness does change depending on the content due to the TVs 'Automatic Brightness Limiter' (ABL).

Great gray uniformity on the Sony A8F. There is only slight dirty screen effect in the center, this is for the most part not noticeable when watching normal content or sports.

There are vertical bands visible with our 5% test screen. These bands will be noticeable in dark scenes in a dark room.

The viewing angle is very good. Black levels remain perfect regardless of viewing angle, which is great for use as a PC monitor. There is some shift in colors when viewed off angle, but it is identical to the LG C8.

The Sony XBR55A8F has perfect black uniformity, as the OLED panel is able to turn individual pixels off in black scenes. This is especially well suited to watching movies in a dark room.

Exceptional reflection handling on the A8F. Reflections are well defined but at a much lower intensity. The TV is well suited even for a bright room.

Out of the box color accuracy is very good. Gamma almost follows our target directly, with only a small spike at the high end. Color temperature is a little warm, but most people won't notice it. Even without any calibration, the A8F is accurate for most people.

It didn't take much to calibrate the A8F. With some minor settings changes the color accuracy is excellent. Gamma follows our curve precisely, and color temperature is nearly perfect.

The A8F upscales 480p content like DVDs well. The image is not overly sharp and details stand out well.

720p content from a cable box is upscaled well with no obvious issues.

1080p content from Blu-rays or from a game console are displayed nearly as well as native 4k.

Native 4k content is displayed well with no issues.

With WRGB OLED TVs, all 4 subpixels are never on at the same time, so there are two photos.

The HDR EOTF in 'Expert 1' follows our PQ curve perfectly until it rolls off suddenly at the peak brightness of the TV. The Game and PC also follow our input stimulus perfectly, which is excellent.

Like all OLED TVs, the A8F is not able to produce bright saturated colors. This will be noticeable especially in bright outdoor scenes. The difference between the A8F and C8 are likely due to panel variance.

This is one area where the Samsung Q9FN and Q8FN really excel.

Great gradient handling on the Sony XBR55A8F. There is some banding visible in dark greens and reds, but overall it looks good.

The TV shows some signs of image retention even after 10 minutes of recovery.

This test is only indicative of short term image retention and not the permanent burn-in that may occur with longer exposure to static images.

Note: There is some variation between panels, even of the same model. Some panels may be more or less prone to temporary image retention.

Although we don't expect most people who watch varied content to have any issues, OLED TVs, such as the Sony A8F do have the possibility of experiencing burn in. There is a Pixel Shift option on the A8F that will shift the entire screen by a few pixels (this is not noticeable) to help reduce the risk of burn-in.

You can read more about our investigation into burn-in here. 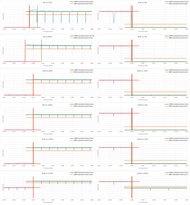 Like all OLED TVs, the response time of the A8F is nearly instantaneous, resulting in almost no persistence blur. This is great when watching fast-paced content as there is almost no ghosting/movement trails. There is some very slight overshoot when transitioning from a black frame, but this shouldn't be noticeable.

The blur in the photo is due to persistence, not response time. 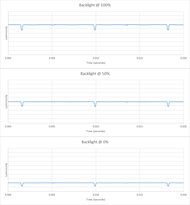 The Sony A8F is almost flicker-free, as are all OLED TVs since there is no backlight. There are small spikes approximately every 8 ms, this is not really visible as flicker though. This does result in some persistence blur, as can be seen in the response-time box photo.

Like last year's A1E, the Sony A8F has an optional BFI mode. When enabled, the TV will insert a black frame between each frame to help reduce stutter. With 120 Hz content, it drops every other frame, with 60 Hz content it cuts the frame hold time in two. If motion interpolation is enabled or with 120 Hz content, we do not recommend enabling BFI.

To enable BFI on the Sony A8F, set 'Motionflow' to 'Custom', and set 'Clearness' to 'High'.

The A8F is able to interpolate lower frame rate content up to 120Hz. This feature introduces what is know as the 'Soap Opera Effect', but helps motion appear smoother.

Since the TV displays the full frame almost instantaneously, low frame rate content like 24fps movies stutters, especially in wide-panning shots. This can be reduced by enabling BFI or motion interpolation.

The Sony A8F displays 24p content without any judder, regardless of source.

The A8F does not support a variable refresh rate.